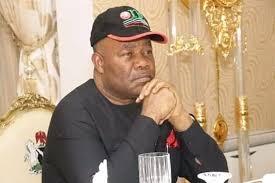 The minister of Niger Delta Affairs, Godswill Akpabio, has been removed as the leader of the All Progressives Congress (APC) in Akwa Ibom state. This APC Akwa Ibom state made the announcement at its second stakeholders meeting in Uyo, The Sun reported.

Ita Udosen, the state caretaker committee chairman, said the state leadership status conferred on Akpabio by a faction of the party has been formally nullified.

According to Vanguard, the chapter in a communique explained that going by its constitution, the state chairman is the head of the party caucus in the state.

The party noted that it is therefore a violation of its constitution for any faction to confer leadership status on Akpabio.

The APC said: “That the Party hereby reminds every member and the general public that the State Chairman (or Caretaker Chairman as applicable here) is the Chairman of the State Caucus as provided for in Article 12.9 Sub (i) of the party Constitution (October 2014 As Amended) and remains the Party Leader in the State until further notice.”

Members of the chapter similarly declared all-party factional leaderships at different stakeholders’ meetings null and void as a means of bringing peace and sanity to the party ahead of 2023 general elections.

Meanwhile, Salihu Lukman, the director-general of the Progressives Governors Forum (PGF) has said All Progressives Congress (APC) may not be able to win the next presidential election.

According to The Punch, Lukman, made the statement on Monday, April 12, in a paper titled, Determining Factors for 2023 Contests in APC: Internal Contest and Inconvenient Reality.

Lukman while advising members of the ruling party against having what he called “blind trust” in some of the leaders, warned that the APC may not have its candidate to succeed President Muhammadu Buhari.