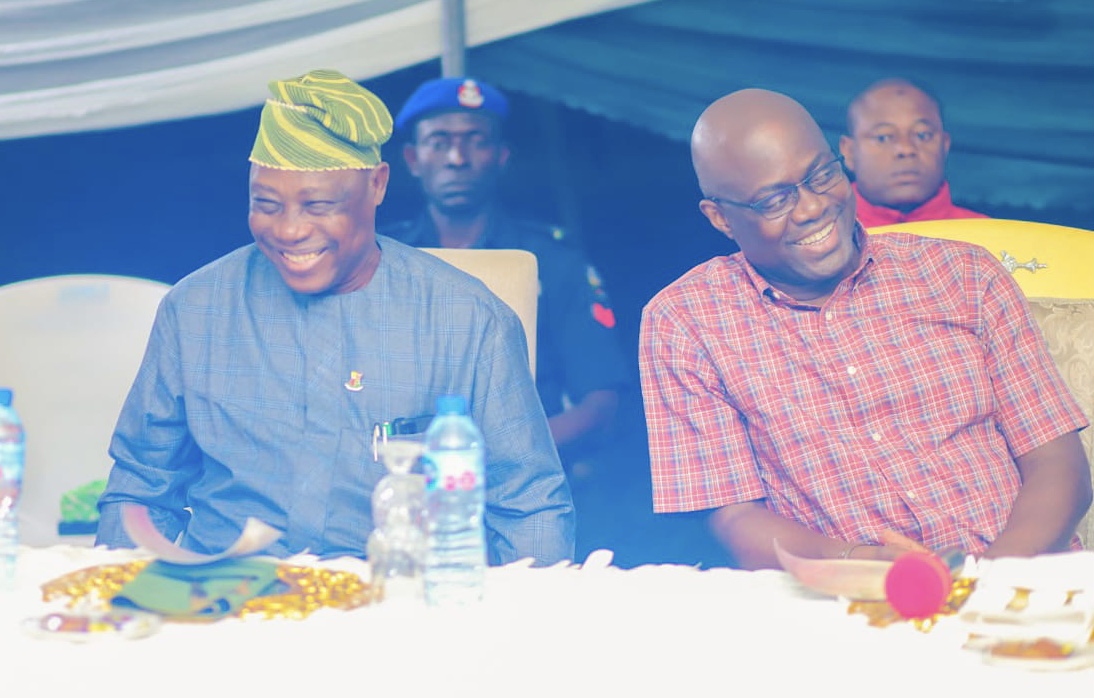 Oyo State Civil Servants have vowed to mobilize massively for Governor Seyi Makinde’s re-election, saying they will carry their GSM to the polling boot to re-elect him in the forthcoming 2023 general elections, MOUTHPIECE NGR reports.

They made the announcement on Monday evening at a dinner held for 2021 Merit Awardees in front of the Presidential Lodge at the Government House in Agodi, Ibadan, to mark Oyo State Productivity and Merit Day.

One of the male recipients who spoke on behalf of others said they would bring their GSM to the polling boot on election day to re-elect Governor Seyi Makinde since he has done well for them, particularly with his GSM calendar, which is the 25th for salary payment.

“We have never had it so good like this before. We want to appreciate our dear Governor, Seyi Makinde, for consistently paying salaries, pensions, and other benefits.”

He informed the gathering that he lost his first fruit just before the governor took office, putting him out of service for several months. However, the governor, was able to get him back to work without the need for lobbying, which is an indication that he’s truly a God-sent-man.

In her submission, a female awardee noted that their participation was only meant to express gratitude to the governor and his administration for seeing proper to honor them for their hard work.

“Being diligent is usually a good thing, she remarked. We, as civil servants, would like to thank the governor for all that he has done for us.”

“While I urge my colleagues to work more, I also need to let them know that winning an award is a reward for their hardwork. We want to thank His Excellency for the good work. We ask God to give him a second term in office so that democracy’s benefits can continue.”

The Head of Service, Alhaja Ololade Agboola, who intimated earlier in her remarks that she’s one of the longest civil servants in Oyo State, having spent 35 years in service, said she can say which administration has really performed and she will give it to Governor Makinde.

She said: “Governor makinde’s attitude to Civil servants has not changed. We have seen the step you have taken on the welfare of Oyo Civil servants and it baffles me a lot how you have been so much concerned about us. But I came to understand that, before she left this world, your mother was once a part of us.”

“I’d like to thank you very much, sir, on behalf of others. You’ve been so kind to us. You have marvelously done well for us.”

“For the past 3 years now, we can plan our salary. Salary has been targeted as economic development of Oyo State. Once again, You have done so well”.

Agboola, who had stated that there are several forms of awards, then revealed that these awardees have worked for the government for the past 20–25 years and have never had the opportunity to attend this government building, commenting on how well-adjusted Governor Makinde has been.

While speaking, the governor of Oyo state, Seyi Makinde, who was in company of his deputy, Bayo Lawal, thanked the organizing and planning committee for the work well done despite signing the letter of the program at the early hour of today.

He said it was a decision taken without any influence taken from anybody, thanking them for validating, and stated that this is Oyo state, where they don’t have to lobby for anything they have done.

Makinde, who insisted that doing more is the reward for hard work, vowed to keep pushing and gave the government servants additional assurances that he would continue to defend their interests.

The governor gave the civil workers the advice not to pay attention to power hungers who just want to make the state ungovernable by spreading misinformation and wishing the state ill.

“At times, I wonder why people are telling lies in order to gain power when I see them being peddled around. They are there carrying on bad traditions rather than building on positive ones.

“I left Iseyin on Saturday, and not long after I arrived in Ibadan, I learned that a clergyman had been abducted and a mechanic had been struck with a straight bullet. I contacted the authorities to find out whether this information was accurate, but it was not. The same is said about the WAEC rankings in Oyo State. I’m curious as to why they are wishing the state they are seriously looking forward to governor bad.”

He urged the public workers to be more concerned with the state’s development and to not pay attention to those who have harmful intentions for the state.

He pointed out that when his administration took office, he paid back long-standing civil servant arrears, but his opponents claim that we strangled the state’s purse.

For the awardees, we will continue to prioritize the welfare of oyo state workers. We are here to work together”.

“My advice to you is to inspire others and achieve the finest performance possible from people who are collaborating with you. At the end of the day, those little efforts will distinguish our state from others in Nigeria”, he said.