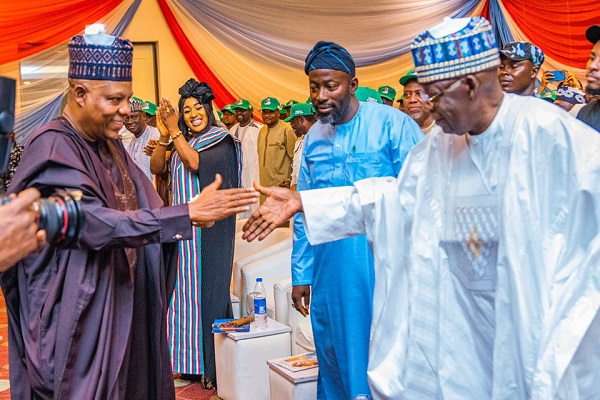 The vice presidential candidate of the All Progressives Congress (APC), Senator Kashim Shettima, says it is now time for the north to repay the electoral support which the party’s flag bearer, Asiwaju Bola Tinubu, has given the region over the years.

Shettima, speaking yesterday in Abuja during the unveiling of the Tinubu/Shettima Door-To-Door grassroots mobilisation campaign vehicles donated by the Northern APC State Assembly Speakers, said the APC presidential candidate had always given his all to the North.

He cited Tinubu’s role in helping to provide platforms for the presidential ambitions of former Vice President Atiku Abubakar in 2007, Mallam Nuhu Ribadu in 2011 and President Muhammadu Buhari in 2015.“

“In 2007 when the Peoples Democratic Party (PDP) dehumanised and chased former Vice President Atiku Abubakar out of the party, it was Asiwaju Tinubu who offered him the platform of the Action Congress (AC) on which he contested the 2007 presidential election,” Shettima said.

He added: “Similarly, in 2011, Asiwaju offered Nuhu Ribadu the platform of the Action Congress of Nigeria (ACN) to contest for president.

“In 2014, if not that Asiwaju Tinubu mobilised the entire APC Southwest delegates for him, President Mohammadu Buhari would not have won the APC presidential ticket to contest in 2015.

“Tinubu stood firmly for justice, equity and fairness with his endorsement of Northern presidential candidates at various times in the past.

“So the 2023 election provides the opportunity for Northern Nigeria to pay back the goodwill and support that Tinubu had extended to them at different election circles.”

Shettima also recalled how Tinubu played a key role in checking what he called PDP’s rigging machine in the Southwest states of Osun, Ekiti and Ondo states in the 2007 general election.

He said if voted into office in next year’s election, Tinubu would build a new Nigerian nation that every citizen would be proud of as he is endowed with the intellect, capacity and ability to deliver.

The former Borno State governor thanked the speakers for their gesture, which he said would go a long way in making the APC campaign easy.

He also took a swipe at the PDP, saying: “They spent 16 years forgetting what the railway can do for the country. I wonder how the PDP still exists as a political party.

“They are still fighting over the leadership of their party. We are not like them. We are smarter. We know the road better than the Poverty Development Party.

“We are a party of progressives. We are thinkers and doers. We have the courage, the determination, the perseverance and the foresight to identify Nigeria’s problems and tackle them for the benefit of our children’s tomorrow. The journey has started already.”

Tinubu enjoined the APC Northern state Speakers to co-opt their counterparts in the South in the campaign initiative.Director General of the APC presidential campaign council and Plateau State Governor, Mr. Simeon Lalong, said as leaders of the legislative arms of government in APC controlled states in the North, the speakers and other legislators occupy a unique position to not only connect with the people at the grassroots but also mobilise the people for Tinubu’s election and educate them on what he stands for.

Lalong said: “Our Presidential Candidate Asiwaju Bola Tinubu and his running mate Senator Kashim Shettima come along with wonderful records of achievement that are a clear signal to the journey towards a greater Nigeria.“They are focused on building the economy, uniting the nation, tackling insecurity and addressing education and health challenges among others in a way that meets the yearning of Nigerians.“As we get set to work for the success of our Presidential Candidate Asiwaju Bola Tinubu, I wish to remind you that there is so much that the APC has done at the federal, state and local government levels that will speak for us.“It is therefore our duty to highlight these achievements just to remind Nigerians that our party has done a lot to change Nigeria for good in various ways.”Deputy Campaign DG North and Governor of Jigawa State, Abubakar Badaru, praised the Speakers for coming together to deploy their grassroots structures towards delivering the Tinubu/Shettima ticket at the elections in 2023.He advised them to carry along the councillors of their various constituencies to deepen their reach out and consultations across the North.Chairman, Northern APC Speakers Forum and Speaker Kaduna State Yusuf Ibrahim Zailani assured Tinubu that they had resolved to ensure the success of the APC by reaching out to the grassroots.Vehicles donated for the mobilisation and Campaign by the Northern Speakers Forum were unveiled and distributed to coordinators at the ceremony.The parties are scheduled to commence their presidential campaigns on September 28 ahead of the February election.