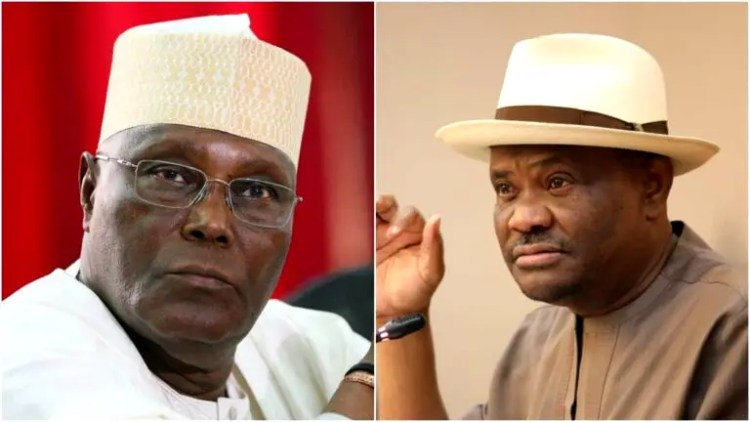 Following alleged refusal of his olive branch, the presidential candidate of the Peoples Democratic Party (PDP), Alhaji Atiku Abubakar, is being pressured to break the ranks of the governors and other stakeholders supporting Rivers State Governor Nyesom Wike.

Atiku has joined forces with some highly-placed individuals and his strategists have started reaching out to Wike’s backers on individual basis.

Sources close to Atiku are confident that two of the governors backing Wike will soon pull out of the group to keep the party united ahead of the poll.

A source in Wike’s camp admitted that the group had identified one of the governors likely to pull out.  The camp regards the governor as the ‘weakest link’.

He said Wike cannot be intimidated under any guise because of the group’s demand that the National Chairman of PDP, Dr. Iyorchia Ayu must step aside.

To prevent a hijack of the National Executive Committee (NEC) meeting on Thursday, Ayu has taken charge without his fate on the agenda.

It was gathered that the composition of the PDP Presidential Campaign Council and the flag-off of the 2023 campaign shuttles may dominate discussion at the NEC meeting.

Investigation revealed that Atiku’s camp has changed tactics to curtail the influence of Wike without prejudice to the ongoing talks with the governor.

A top source said: “Since the reconciliation talks with Wike have been unstable, Atiku has initiated personal talks with those in Wike’s camp.

“Even within Wike’s group, there are also individual interests. Atiku has said he is ready to work with everybody for the success of the party.

“So far, so good, there have been positive responses from these leaders including two serving governors, some ex-governors and leaders at various levels.

“You can call it talks within talks. But the personal reconciliation moves will not affect ongoing negotiation with Wike’s camp.

A strategist in Wike’s camp said: “We know he has been trying to break our ranks but he has not succeeded. He cannot succeed because such a move thrives where there are poor and hungry people.

“We know the weakest link governor among us. But if he deserts Wike’s camp, he will suffer.

“We have no selfish agenda. Our demands border on how to make the party stronger, ensure equity and justice between the North and the South. We want a sense of belonging for all.

“There is no personal agenda against Atiku but we are asking him to rise up as a statesman and ask Ayu to honour his words to step down if a Northerner was elected as PDP presidential candidate.”

Atiku himself is said to have faulted Ayu on his comments on Wike and other governors.

The PDP presidential candidate, according to a source, said “Ayu should not have made such comments at a time we were trying to calm down the storm in the party.

“He said Ayu ought to be more circumspect in his choice of words.”

Wike’s camp however rejected “a bedroom approach to such a sensitive matter like this. As our presidential candidate, he ought to issue a statement to caution Ayu.”

Ahead of the NEC meeting on Thursday, Ayu has taken charge of the agenda without any reference to his disagreement with the governors he referred to as children.

“I can tell you that the agenda of the NEC meeting has nothing to do with the spat between him and Wike, It is not likely to come up,” a party source added.

Atiku yesterday met in Abuja with all PDP governorship candidates.A source said Atiku “only unfolded his vision and programmes. He also made it clear to ensure total victory for PDP in all the states.

“While a meeting was going on in London, Atiku was busy consolidating at home.”

But a governorship candidate said: “Throughout the meeting, Atiku did not talk about his challenges with Wike and a few others.”