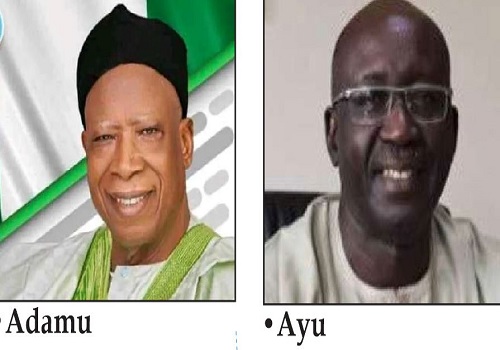 The Peoples Democratic Party (PDP) and the All Progressives Congress (APC) yesterday bickered over the high cost of the ruling party’s nomination forms.

PDP National Chairman Dr. Iyorchia Ayu said the high cost of the fees cast the ruling party in the image of rogues and hypocrites.

But the APC’s National Women Leader, Dr. Betta Edu defended the fees, saying it would shut out unserious aspirants.

The APC at its extraordinary National Executive Committee (NEC) meeting in Abuja on Wednesday pegged its presidential nomination form at N100 million while that of the governorship goes for N50 million.

Also, those wishing to contest for the Senate under the APC are to pay N20 million while it is N10 million for the House of Representatives. State assembly aspirants are to pay N2 million.

Ayu, in a statement on Thursday by his Media Adviser, Simon Imobo-Tswam, argued that it was insensitive of the APC to fix such exorbitant rates for its nomination forms.

According to the chairman, the APC has disenfranchised thousands of her youths and dashed the hopes of millions of Nigerian youths who applauded President Buhari when he signed the Not Too Young To Run Bill into law in 2018.

Ayu said: “It is most insensitive, and mind-boggling. All those buying the N100m and N50m nomination forms should be investigated for fraud.

“Nigerians can all see what the APC is: a fragmented alliance put together to capture power and inflict maximum pain on Nigerians, including their members.

“Nigerians will recall how in 2014, Gen. Muhammadu Buhari, now President and leader of the APC, told Nigerians that he had to borrow N27 million to buy his nomination form.

“The same man, as leader of his party, has now sanctioned the sale of the same forms at N100 million. I am told that’s an increase of 370 per cent”.

The party chair claimed that the economy was booming in 2014 when the PDP was in power, but the ruling party had reversed the gains.

“The incompetent APC presidency has now run the economy aground, making Nigeria the Poverty Capital of the World.

“How then can impoverished APC aspirants buy nomination forms at such prohibitively high costs? And yet, only recently he (President Buhari) preached ‘equal opportunity’ to them.

“We, the Peoples Democratic Party (PDP), are different. We are a mass movement for the Nigerian people. This is why our nomination fees are soft and democratic.

“When you compare us with the APC, the difference is clear. This is why we must return to power to save Nigerians from this insensitive government”, the party chair added.

The elder statesman in Abuja said the hike in the cost of the nomination forms by the ruling party vitiated the principles upon which the party campaigned and was voted into power.

Ebri, in a statement in Abuja, urged the APC National Working Committee (NWC) to rethink its position on the matter.

But explaining her party’s decision, Dr. Edu said the fees would not only shut out unserious aspirants but also prevent form syndication

Edu, who spoke on the ‘Good Morning Show’ on ARISE News Channel in Abuja, said the increment was a mechanism by the National Working Committee (NWC) of the party to curtail the activities of some people who obtain forms just to constitute a hindrance in the electoral process.

She said: “Everywhere around the world, running for elections has never been cheap and the party must be able to have means to guard several other issues that may arise.

“You find people who are not interested in running for elections just standing up, picking up forms and just waiting to constitute a kind of barrier or put a clog in the entire process as it goes on.

“These are not things that we want to see as a party. We are the ruling party, the largest party in Africa, a party where if you pick their nomination form and you are the candidate, the probability of you becoming the elected person for that position is almost a hundred per cent.

“So, we cannot afford to dabble or joke around or gamble around. So, we want only serious people who are interested in running and representing different persons to run.”

Edu also justified the cost of forms for the House of Assembly aspirants, saying N1.5 million for a state lawmaker’s nomination form “is fair to the general population.”