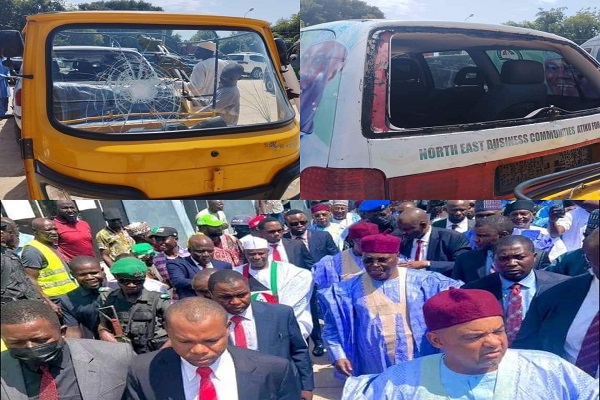 No fewer than 74 persons have been reportedly hospitalised when suspected thugs attacked the convoy of  Peoples Democratic Party (PDP) presidential candidate of Atiku Abubakar in Maiduguri.

It was gathered 100 vehicles were vandalised by the hoodlums who attacked the convoy after Atiku left the Shehu of Borno  Alhaji Abubakar Garbai Elkanemi Palace to Ramat Square to address his supporters in the State.

The PDP spokesperson, Dino Melaye accused the ruling All Progressives Congress (APC) of sponsoring the incident. He alleged the APC planted thugs at very strategic locations in the metropolis to attack them.

“They deployed their thugs to attack our convoys with stones, sticks, matchetes as we left the Shehu’s Palace to come to the Ramat Square, all in an attempt to stop our rally.”

The thugs were deployed in many strategic locations to attack our supporters. But we want to assure them that nobody can stop us,” Melaye stated.

He said:  “I am disappointed by the allegations made by Dino Meleye that some APC thugs attacked Atiku’s convoy while in Maiduguri for their Presidential Campaign rally.

“We all know that since Governor Babagana Zulum takes over the mantle of leadership in his acceptance speech was to ban all political thuggery across the state.

“Our ruling party is a law-abiding political party and that was why we as government did not deny PDP venue for their rally as witnessed in some States.

“All I know is that there is no PDP in Borno and if Dino Melaye would lack what he will tell the people of Borno on what they intend to converse for votes, he should desist from fabricating lies against our party.”