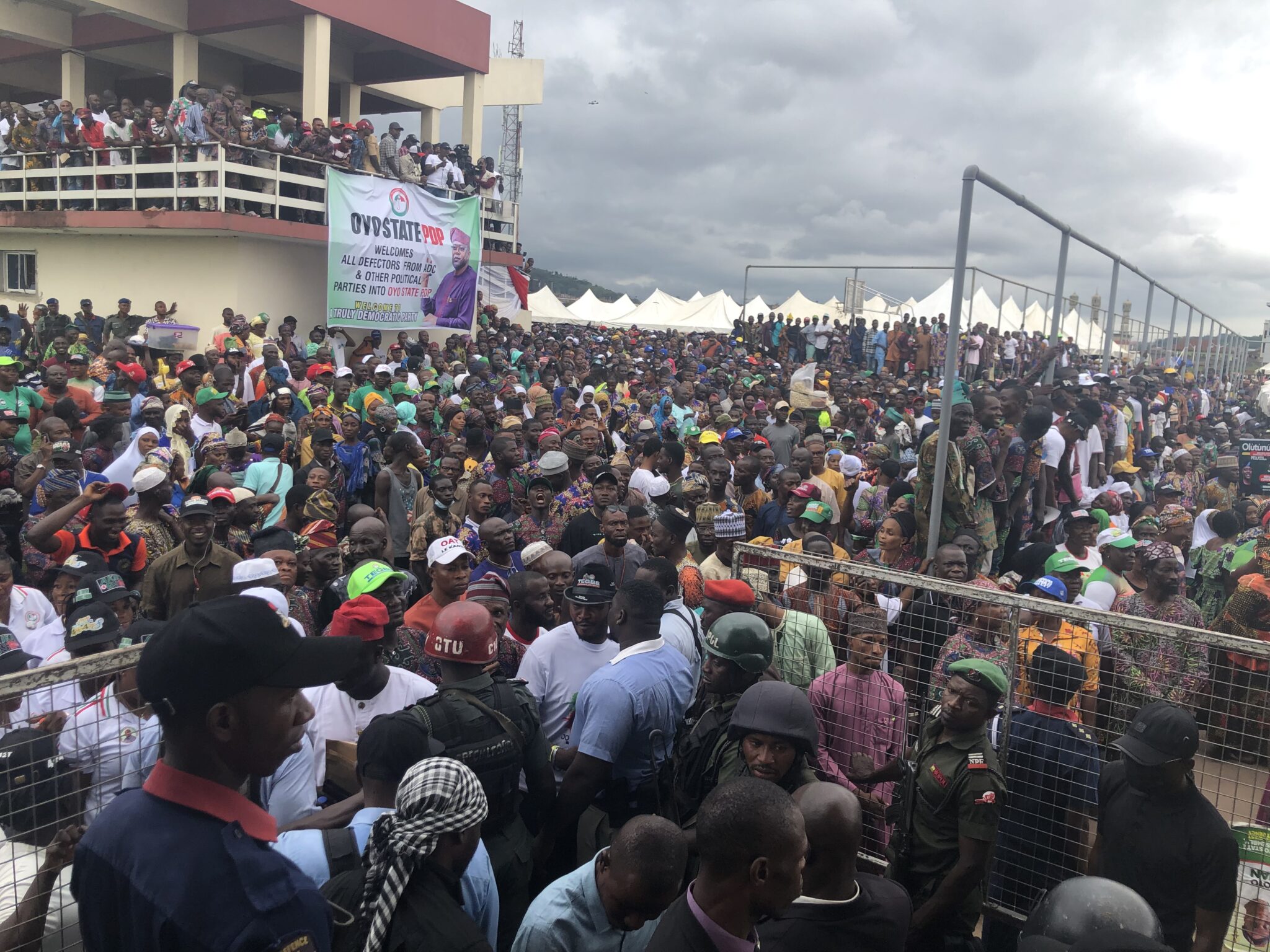 The Oyo chapter of the African Democratic Congress, as well as Zenith Labor Party, also collapsed their structure, which was observed by mammoth crowd at the Adamasigba stadium due to Governor Seyi Makinde’s impressive performance in his three and a half years in power.

The defectors from the three parties insisted that his reelection was imminent in order to keep the state making progress toward its growth and warned that failing to do so would cause it to regress.

Ambadsador Taofeeq Arapaja, the party’s national deputy chairman, remarked during his speech that he is a testimony to Oluwaseyi’s kindness, who may have impacted others as well.

After many years, he noted that Governor Makinde called him about his pension in 2019 shortly after he assumed office and ensured he received payment form 2011 he left office within three weeks.

He continued by saying that Makinde is a gift to humanities because many people have been in his shoes before and didn’t pay enough attention to the wellbeing of the masses, “he has done a lot for the general public.”

He urged the crowd to support Governor Seyi Makinde, who had outperformed the previous administration in the areas of education, infrastructure development, and the health sector, among other things, rather than voting for losers and wasting their votes.

Shortly after the governor’s greeting, a torrential downpour started as he urged them to mobilize heavily for the second Omituntun 2.0, which would be to everyone’s advantage.

An eyewitness who spoke to MOUTHPIECE NGR revealed that the rain likewise started as he entered the program’s venue, stopped, and then resumed again as he clutched onto the microphone to start speaking.

He added that the governor and his deputy’s acceptance and popularity in the state, have undoubtedly improved the prospects for Governor Makinde’s reelection and further weakened the structure of the main opposition, the All Progressives Congress in the state.

It should be recalled that MOUTHPIECE NGR reported on Saturday that SeyiBayode 2023’s growing popularity has shown that the two candidates would be a force to be reckoned with in the general election of 2023.

This was due to the high number of defections that have occurred since Barrister Bayo Lawal was appointed as deputy governor of Oyo State, harvesting important APC leaders in Oke-Ogun and other zones into the PDP after securing the support of all of Oke-royal Ogun’s fathers and a number of socio-cultural groups.

As it seems, the camps of the two leading candidates for the governorship of the state, Senator Teslim Folarin of the All Progressives Congress (APC) and Adelabu Penkelemes of Accord party, are worried about the rising support among women and young people in the state.