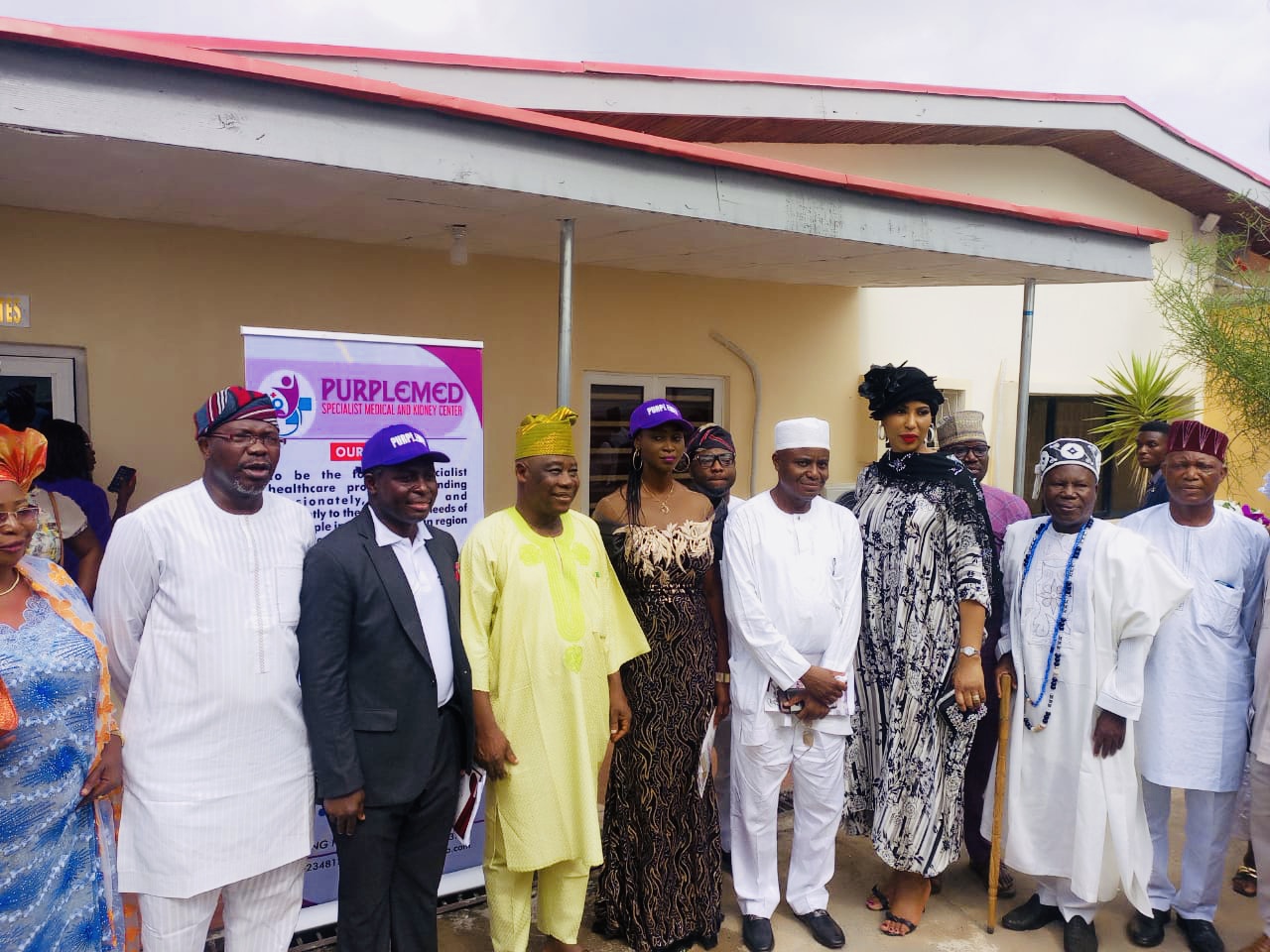 A private medical and kidney center called Purplemed in Old Bodija, Ibadan, has been commissioned by Barrister Adebayo Abdul-raheem Lawal, the deputy governor of Oyo State, to offer accessible care to people with kidney-related illnesses and other health problems.

In company with prominent Oyo government officials on Saturday, Bayo Lawal expressed happiness with the project’s completion and said that it will help not only the state but the entire nation.

While praising the founder of the center, Mr. Ahmed A. Raji, SAN, Chairman of the Board of Directors of Purplemed Health Solutions, he explained that in order to attend today’s event, he had to meet with Governor Seyi Makinde because his original plan was to accompany the governor to Igboora for the Twins festival.

He noted that Mr. Raji, who is from Iseyin, has never once left the town and has continued to have a significant impact on the overall growth of the Oke-ogun zone.

The deputy governor said, “Upon my arrival, Senior advocate was saying that, “Awon Ara Ile Niyi” which merely means that we are all doing this together. I would have loved to speak like a lawyer, but since this is a gathering about health issues, I may not be able to say much more. However, I can always support some of the points made by medical professionals.”

“In 1994, my father had a serious problem that required flying him from a northern state for treatment in UCH, but the fact that my father was placed on a queue caused him to consider using a private hospital for an immediate treatment. However, finding a top-notch consultant was challenging, so in the end, I made attempts to get my father treated immediately in the private sector, which couldn’t be done in two weeks since I didn’t want my dad to die.”

“The second situation involved Alao Arisekola, who, in contrast to the government facility, was immediately evacuated abroad for urgent intervention.”

Lawal stressed that it’s not that government can not do it alone but with support and total cooperation from everyone, the facility can be maintained at standard as the health centre was conceived to redress the problems faced by those having kidney disease.

“About two months ago, I attended Nigeria governor’s forum meeting in Abuja, the minister of health came and trying to sell the idea of health sector which we had long been implementing in Oyo state.”

“We have about 351 primary health facilities in Oyo State across ward. It is a policy that has been implemented, and I must commend UCH for its cooperation with the Oyo state government during the covid-19.

“The taste of the pudding is in the eating. This location has always attracted wealthy individuals, and I can confidently assert that a capable individual’s vision for a health solution secured the property’s metamorphosis.

Lawal argued that the medical center would save Nigerians from having to travel abroad for medical care, and he urged people to support the initiative through prayer and patronage.

“This is a high hospital outfit. Professional care is being taken with this procedure. There is also transplant in place. About 20 million people in Nigeria have kidney disease. But with this facility, it means that health concern would be at minimum.”

“Because you won’t have to fly abroad or pay a hefty sum for treatment in the United Kingdom or another foreign country, having this facility nearby saves money.”

“I’m confident that if a patient with a N2 million budget were brought here for care, they would receive adequate care and even get some spare change in place of spending their money abroad.”

He insisted that the framework had been established to lessen people’s suffering and declared that Mr Raji’s goal was to advance humanities rather than make a profit.

Lawal commended lawyer Raji for his excellent intentions and deeds everywhere, saying that his good legacy together with modesty and integrity will continue to pave way for him.”

“This kind of facility is a high end facility. I know that there would be challenges, particularly in a country like Nigeria, but to succeed in business, you must be determined and prompt to duty, provide medication properly, and operate it consistently.”

While emphasizing the earlier statement made by the event’s chairman, Professor Salako, who advised government health workers not to resort to strike action in order to resolve issues, the deputy governor further noted that the action is killing and advised that there must be another strategy for government workers agitation.

“Close to nine months down the line, LAUTECH students are still living at home. Yesterday, the Students’ Union Executive paid a courtesy visit to my home. Therefore, we need to be very deliberate in our actions and stop thinking about sympathy strike with National body”.

“In Oyo state, we are not owing lecturers anything. ASUU claimed it is a sympathy strike. However, it is clear that they are merely acting politically in LAUTECH. I am advising them to call off their strike and look for other alternative action to press home their demands because such a move would significantly harm children, and I would not be happy as a grandfather.

Lawal, in his final words, urged everyone to work together for the greatest possible delivery of medical services, saying that the Makinde led administration has been working to foster an atmosphere where health facilities can grow.