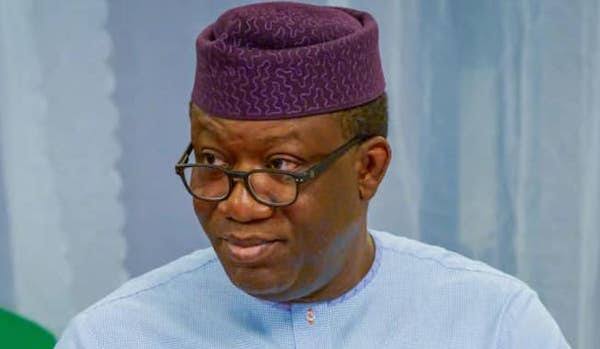 Olayinka, who also cautioned the police authority in the State to avoid being used as instrument of political oppression by former Governor Fayemi or anyone, asked the rationale behind sending armed policemen from the Ekiti State Rapid Response Squad (RRS) to arrest and detain a man just for making comment in a closed WhatsApp Group with less than 50 participants.

He condemned the alleged insistence of the RRS Commander, CSP Marcus Ogundola, to speak with Fayemi before allowing Dr Bankole to be admitted to bail, asking when Fayemi became the Inspector General of Police or the State Commissioner of Police such that he now issued orders to policemen as to who to arrest, detain and admitted to bail.

Policemen from the Ekiti State Rapid Response Squad (RRS) had arrested Dr. Bankole in connection with a petition written by Dr. Fayemi, claiming that he (Dr. Bankole) forwarded to a WhatsApp platform, a message alleging mismanagement of the State funds, while he (Fayemi) was Governor.

Reacting to the arrest of the ASUU Welfare Officer, in a statement on Monday, Olayinka said, it was worrisome that Dr Fayemi, who ran Ekiti State to the ground could descend to the ridiculous level of employing intimidation to prevent the people from asking questions about his administration.

He said; “For someone who left Ekiti State with no single road with which Ado Ekiti, the State capital can be accessed, it is funny that his reaction to allegation of fraud made in a WhatsApp Group with less than 50 participants, was a petition and orchestration of arrest and detention even after the person who alleged had refuted the allegation and apologised.

“Funny enough, here is the same Fayemi, who went for cover when he was invited to appear before a probe panel in 2017.

“My question is, why is Dr Kayode Fayemi always afraid of being asked questions about his running of Ekiti State finances as governor?

“And what is the business of the RRS that should be going after armed robbers, kidnappers and terrorists with comment made in a closed WhatsApp Group?”