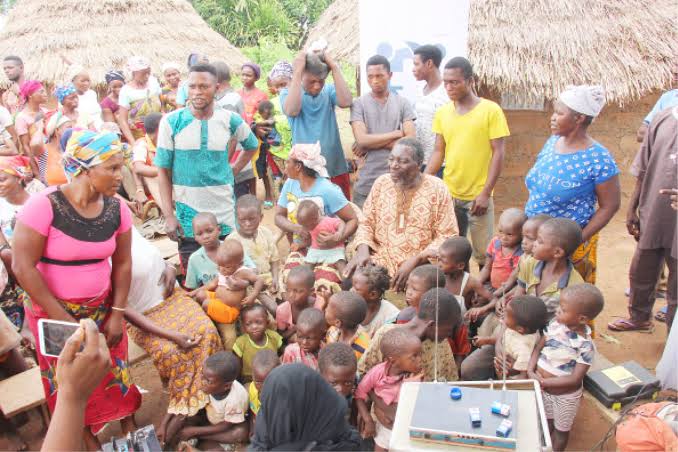 A Fact-check by MOUTHPIECE NGR correspondent in Irepo Local Government, Mr Sage, indicated that the Kishi Center for Internally Displaced Persons (IDPs) was a project of the Federal Government under President Muhammadu Buhari, commissioned by the previous administration under late Abiola Ajimobi, and given to the Former Irepo Local Government Chairman Hon. Asif Adediran in 2018.

Internally displaced persons (also referred to as “IDPs”) are defined as “persons or groups of persons who have been forced or obliged to flee or to leave their homes or places of habitual residence, in particular as a result of or to avoid the effects of being armed”, according to the Guiding Principles on Internal Displacement.

IDP was introduced as one of several components of a plan to assist the state’s residents during emergencies and disasters, among other occasions. Additionally, the IDP’s facilities include administrative buildings, perimeter fence, a storehouse, a gatehouse, and a kitchen.

Our correspondent reported that the Kishi IDPs are located in Sooro village, which is in the Kishi area of Oyo State and is quite close to the Kishi Reserve, which marks the border between the Kishi and the Igbeti.

The IDPs, however, received relief materials from the National Commission for Refugees, Migrants, and Internally Displaced Persons (NCFRMI) on April 25, 2019. The Commission is the top federal government organization in charge of looking after the displaced.

At a ceremony conducted in Kishi, the beneficiaries received the gifts, which together are worth N10 million, from the NCFRMI Federal Commissioner, Hajiya Sadiya Umar Farouq. The materials, according to the Minister, who was represented by Mrs. Funmi Bara, Margaret Ngozi Ukegbu, the South West Zonal Director, and other staff members, are meant to help the IDPs.

However, the materials provided by the federal government were nowhere to be found now, much to the dismay of Peoples, as rumors about the previous administration continued to circulate.

On Saturday, The IDP issue came to light when Governor Seyi Makinde was addressing to concerns about environmental sanitation and the alarming inflow of beggars on major roads in the Ibadan city and surrounding locations while speaking on Fresh FM.

The beggars would be taken to Kishi town, according to Makinde, who also promised that those responsible for the influx would be caught. This is because the Kishi’s IDP center, established by the APC administration, shares a border with the North and will make it simple for the government to return the beggars to their state.