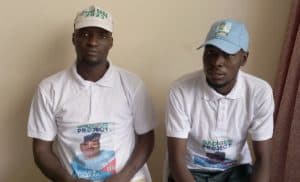 Two young men have trekked 205kms to register their support for retired Air Marshal Saddique Abubakar, the governorship candidate of the All Progressives Congress (APC) in Bauchi State.

The duo told newsmen on Sunday in Bauchi that the exercise was to celebrate the emergence of Abubakar as gubernatorial candidate.

Recall that Abubakar who’s a former Chief of Air Staff (CAS), has beaten seven others to secure the gubernatorial ticket.

The duo revealed that the exercise was a show of love for the candidacy of Abubakar and to appreciate his contributions to national development in the past.

They narrated that they have done the exercise without informing anyone or even telling anyone their intention.

The duo affirmed that the gubernatorial candidate was a great achiever, who has brought numerous developments to the state.

“Along the way, we sensitised hundreds of youths to join us in the campaign to make Bauchi great under Abubakar as governor.

“We believe that only he can overcome the problems of unemployment, poverty, insecurity and other challenges bedevilling the state,” Samaila said.

Yahaya said they departed Azare at about 6.30 a.m on Monday and reached Bauchi on Thursday.

Mr Yahaya Miya, the Director-General of Air Marshal Abubakar Campaign Organisation, said “By embarking on that solidarity trek, the young men have shown patriotism and support, they should be appreciated and encouraged.

“On their arrival on Thursday, they were first taken to hospital for proper medical examination and a good bed rest for six hours before taking them to their accommodation,” he said.

“We say a big thank you for your show of support and solidarity,” Miya said on behalf of the APC governorship candidate and the party.