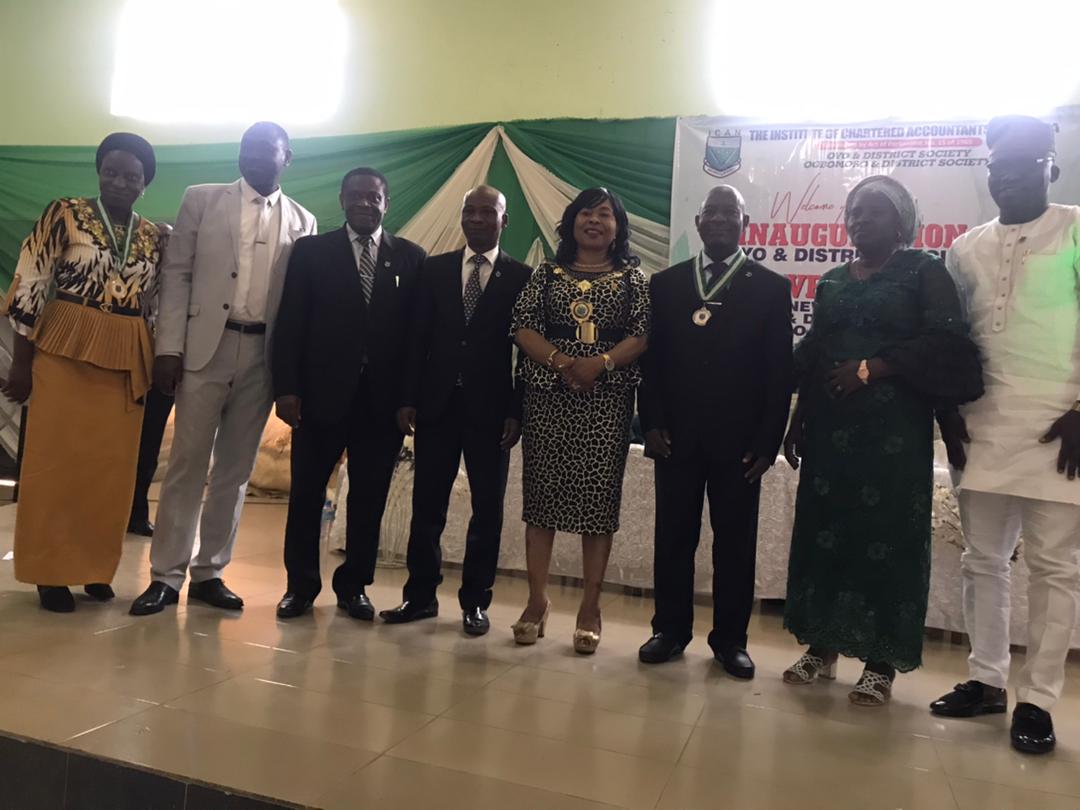 While performing the inauguration ceremony, Mrs Eyitayo disclosed that the newly inaugurated District societies would afford members in Ogbomoso and Oyo towns to interact, exchange ideas and discuss issues of professional and national relevance and interests.

According to her, the position that the two Chairmen and their teams are assuming today affords them immense opportunities to contribute to the promotion of accountability and transparency in Oyo, Ogbomoso towns and environs.

She said the efforts made at the District levels to promote Accuracy and Integrity sums up to positively impact the economy as a whole. The challenging situation currently facing the country affords leaders with clear vision the opportunity to display their innate abilities to surmount challenges and produce results. In fact, true leaders are tested in difficult situations and there is no denying the fact that the economy and our noble profession are presently experiencing unprecedented times.

Eyitayo, who charged members to lead in the efficient management of financial resources stressed that coronavirus (COVID-19) pandemic has impacted negatively on revenue generation potentials and opportunities of most organizations, both in the public or private sector.

“As economies and businesses gradually recover from the pandemic, Chartered Accountants would play central role on the path to recovery and the building of more resilient economies and sectors.”

“It is against this seemingly challenging situation that Dr Agoro Dr. Fasina and their teams would work. I am however confident of their ability to build a solid foundation for the District as this would set the tone for subsequent development and progress of the District.”

The 57th President admonished the two chairmen to leverage the experience and potentials of first, the Ogbomoso/Oyo & District society from which they were separated, and also the individual members of the District to achieve their goals and aspirations.

While tasking incoming executives to ensure that members of the Districts are mobilized to attend the 51st Annual Accountants Conference of the Institute scheduled to hold at the International Conference Centre, Abuja between November 29 to December 3, 2021, she stressed that their success would be measured by the extent to which they have been able to influence every member in achieving the common goal of the Districts.

In her speech, the pioneer Chairperson, Oyo and District Society, Dr. Aminat Aderonke Agoro thanked all leaders, the foundation members for their efforts and sacrifices in achieving oriented results and being part of this legacy record.

“By extension, I appreciate the presidency and council members of the institute for the kind, timeous and swift consideration given to our applications. I assure you all that in due course of time, we shall make you proud.”- she said

He promised to further enhance the ICAN brand name through the Catch Them Young program and sustained relevant trainings and workshops for their members at district levels.

Among those present at the program included LAUTECH acting VC ably represented by the school bursar, Mr SA Okediji, Former House of Representatives member, Lanre Agoro, Dr Oladejo and Dr Alagbe from LAUTECH, and host of others.