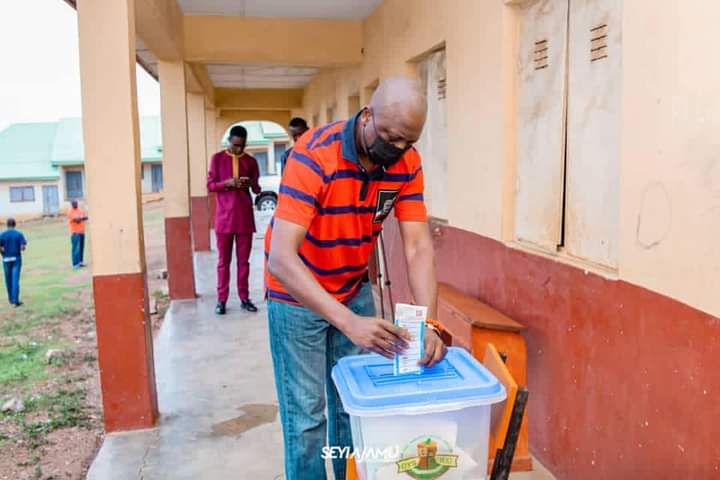 The Director-General Oyo State Investment and Public Private Partnership (OYSIPPA), Hon Segun Ogunwuyi has described as untrue the rumours making rounds that violence erupted in some parts of Ogbomoso zone on Saturday during the conduct of local government election polls in Ogbomoso.

Addressing journalist shortly after casting his vote in his polling unit, Ward 2, Alapata, the PDP Chieftain said the state government deployed adequate security operatives across the state to forestall the breakdown of law and order in any part of the state.

He lauded residents of the town for the peaceful manner they conducted themselves by trooping out in their large numbers to cast their votes for the candidates of their choice.

Ogunwuyi, Former State and National Assembly member expressed satisfaction with the Oyo State Independent Electoral Commission officials who arrived at the various voting centres at the right time with election materials unlike what was experienced in the past.

In his words: “The security architecture in Ogbomoso zone is ok, everybody has been performing his or her civil duty without any form of intimidation and harassment.”

If any security hitch is experienced, the security agents are on ground to nip it in the bud.”

“You journalists as observers have gone round other local governments in Ogbomoso zone, did you see any voting centre where residents or voters fomented troubles? Where you guys informed that there were ballot’s box snatching or any irregularities? ” Ogbomoso people love our pragmatic governor, Seyi Makinde. The peaceful conduct of today’s election has evidently shown that Ogbomoso is solidly behind him.”