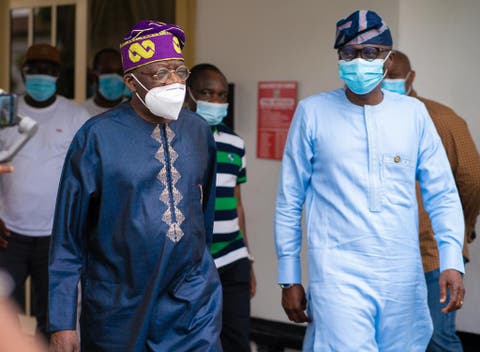 A former governor of Lagos State and National Leader of the All Progressives Congress, Asiwaju Bola Tinubu, said on Saturday that he visited the incumbent governor, Mr Babajide Sanwo-Olu, to ask him if he had anything to do with the killing of protesters at the Lekki Tollgate on Tuesday because he knew nothing about the scenario.

Tinubu, who was at the Lagos House in Marina, also said he could not understand the rationale behind the looting, arson, invasion of police stations, stealing of arms and maiming of innocent persons that characterised the state for days.

Hoodlums had massively looted shops and set fire to several public and private properties, including Television Continental and The Nation newspaper, both of which have been linked to him. This followed the killing of some protesters at the Lekki toll plaza by soldiers.

Meanwhile, speaking to reporters after visiting the governor, Tinubu said, “I came to ask him pointedly; did he order the attack, or if he didn’t order the attack, who ordered it? Was it to his knowledge that people were attacked? That was all I needed from him.”

When asked the way forward, Tinubu said since the government had already set up a judicial panel of enquiry to investigate the allegations of human right abuses by officers of the now disbanded Special Anti-Robbery Squad, people who suffered casualty during the gunshot Lekki incident should volunteer information to the government.

He added, “Those who suffered casualty during the gunshots need to answer some questions too; how were they there; how long were they there; what kind of characters are they? Even those we want to help, we still must extract information that would help the government to prepare in future or understand how and when to react.”

He said the government showed sensitivity in listening to the protesters and taking actions, but that he wondered why some people resorted to violence. “But where are we getting the looting, the carnage, burning, invasion of police stations, stealing of arms and maiming the innocent (from)? It’s handshake beyond the elbow,” he added.

When asked when he returned to the country following reports that he was in France all along, Tinubu said, “I didn’t go nowhere; I’m a Lagosian. I still hold the title of the Asiwaju of Lagos. I’m still the Jagaban. Fake news is all over the place; they said Seyi my son was kidnapped, but he’s here with me and I didn’t pay any money to bring him here.”