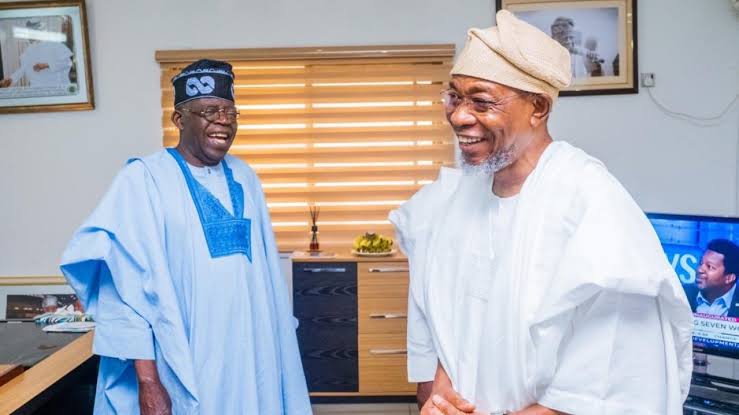 All political groups within the All Progressives Congress (APC) in Lagos have been dissolved.

The Mandate Group and the Justice Group, the two most powerful groups, have been dissolved, according to the communique issued by the party leaders in the state after a meeting on Tuesday.

Bola Tinubu, a national leader of the APC, and Rauf Aregbesola, his associate, have been in a cold war, Mouthpiece NGR reports.

Aregbesola who os currently serving as minister of interior under president Muhammadu Buhari was accused of re-launching political groups in the state without the knowledge of Tinubu, who is regarded as the political leader.

It was learnt that Aregbesola, former governor of Osun state, is interested in running for president in 2023 — an ambition that may pit him against Tinubu, who is also believed to be warming up.

The Mandate Group, made up of Tinubu’s core loyalists, was relaunched by Aregbesola on May 26, 2020 without the consent of Asiwaju Bola Ahmed Tinubu.

Abdullahi Enilolobo, the APC organising secretary in the state, was picked as the new chairman to replace James Odunmbaku, who moved up as the “apex leader”.

Aregbesola was made the grand patron at the meeting which took place at his Ikeja GRA residence.

Reacting to the issue, the party in a statement obtained by Mouthpiece NGR said “APC Is One Group, One Family”.

In the communique signed by 27 party chieftains who are members of the Governor’s Advisory Council (GAC), they said “it was unequivocally resolved that all factions like JG and MG are inimical to party unity and are hereby permanently disbanded and prohibited within the party.

“Party members should no longer make use of these factions or their names with regard to future party business and activities. To continue to hold meetings in the name of these groups or to continue to promote such associations will amount to a violation of this resolution.

“The only permitted use of the names will be limited to historic references. Any violation of this decision is subject to party discipline, including suspension and expulsion. This prohibition extends solely to official party business. We are in no way trying to abridge anyone’s constitutional rights to free speech or assembly. The party chairman is hereby tasked with promulgating more detailed regulations with regard to prohibited and permissible activities for sub-party groupings.

“The party remains supreme. It has developed structures from the ward level to local government and state levels. These are recognized by the party’s constitution. They are adequate platforms for members to congregate and to present their views.

“The APC in Lagos is one party and one family. We must always act in this spirit if we are to attain the dream of democratic prosperity that we set out to achieve. We must do this in honor of June 12 and those who gave of themselves to make democracy our reality.”

Meanwhile the Minister of Interior, Ogbeni Rauf Aregbesola has debunked claims of nursing presidential ambition in 2023 and  also dismissed claims that he is at war with his leader and mentor, Asiwaju Bola Ahmed  Tinubu.

Mouthpiece NGR learnt that he spoke in Abuja this afternoon against the background of the lies peddled by  an online publication.

Ogbeni Aregbesola said his loyalty to Asiwaju is not only total, his commitment to whatever the leader wants is unwavering.

The minister revealed that he knew where the story was coming from and the identity of those sponsoring it. ‘Rift with Asiwaju Tinubu?

Nothing can be more impossible! Nothing can be farther from the truth. I remain committed to my mentor,’ Aregbesola said, adding that “the group our detractors claim has been banned is the most committed to the realization of Asiwaju’s ambition.”

The minister continued: “They even said I have presidential ambition. False!” Aregbesola reiterated that the APC is one,  adding that the party is like an oak tree that keeps growing.

He said his focus and goal is to execute his ministerial duties as directed by President Muhammadu Buhari. In conclusion, he urged his supporters to ignore the publication in its entirety and refrain from being distracted from the goal of building a strong APC as well as a united Nigeria.