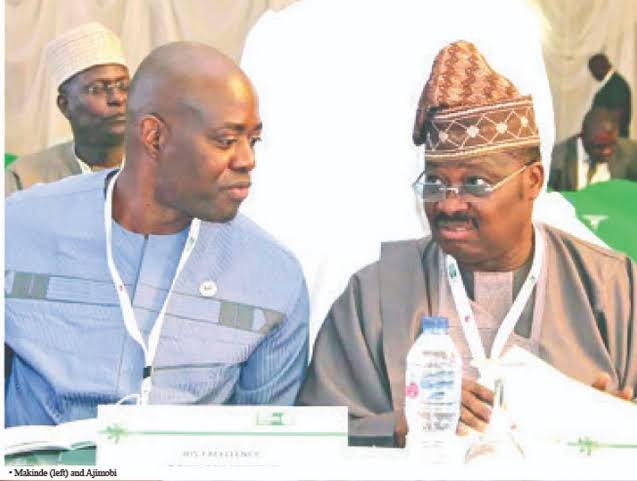 The family of the former Governor of Oyo State, Senator Abiola Ajimobi has said Oyo State Government is largely responsible for the delay in his burial.

Ajimobi died in a Lagos hospital on Thursday after some complications arising from COVID-19.

According to Islamic injunction, the former governor was supposed to have been buried immediately or the next day after his demise.

However, it was gathered on Saturday that the late Acting Chairman of the All Progressives Congress was not buried three days after his death because conclusion had yet to be reached on his final resting place.

A reliable source close to the family alleged that the burial had been delayed due to some impediments by the state government to the burial plans by the family.

Speaking in strict confidence with our correspondent, the source said, “The family of the late Acting Chairman of the All Progressives Congress had made plans for the burial the following day after the death of their patriarch. They had got in touch with the state government for necessary burial approval; they were however rebuffed.

“The government official that the family got in touch with said they could not take action on the matter without approval from the governor, Seyi Makinde. The official also informed us that it has been difficult to pin down the governor for the approval.”

The source also disclosed that when the family eventually informed the governor of the burial plans in line with the laws of the land, “Makinde completely refused to oblige the family on their preferred choice of their father’s burial ground.

“Furthermore, it must also be said that Governor Makinde’s refusal comes after repeated pleas from top government officials and statesmen from federal and legislative arms of government.”

The source further claimed that the governor had not called any member of the family either by phone or made physical contact.

He said, “Imagine that since this man died, a former governor of the state that served two terms, that achieved so much for the state, Governor Makinde has yet to even call the wife nor any member of the family. That is quite unfortunate. Even if you have issues with him, he is gone now; you should drop that as a mark of respect for the deceased.”

However, in a telephone interview with our correspondent on Saturday, Mr Taiwo Adisa, the Chief Press Secretary to Governor Seyi Makinde, described the allegation as grossly mischievous, saying, the Ajimobi family was trying to make flimsy excuses to score cheap points.

Adisa explained that the family had indicated plan to bury the body at his Oluyole Estate residence but later said he would be buried at Oke Ado.

He disclosed that the family later said the deceased would be buried on the land which has a pending litigation between the state government and the former senator.

“The government has already gazetted that the property is not his own. Why would they begin to make overtures to the government that it is at the place that they want to bury him?

“Governor Makinde gave them a waiver to bury him at Oluyole. It is against the law that the dead be buried in a Government Reserved Area in Oyo State but they were given a waiver based on the claim that former Governor Lam Adesina had given a waiver in the past to someone. The governor gave the permit in Oluyole and now they are changing the venue.”

A statement signed and made available to journalists in Ibadan, on Saturday evening titled, ‘Ajimobi’s burial: This wicked lie must stop, read in parts, “The Oyo State Government has strongly denied insinuations that it is responsible for the delay in burying the immediate past governor of the state, Senator Abiola Ajimobi, who died on Thursday.

“In view of the intense enquirers from news media organisations regarding the perceived delay in burying the late former Governor of Oyo State, Senator Abiola Ajimobi, the Oyo State Government wishes to place on record that there is no truth in the rumour making the rounds that the burial is being delayed by the state government.

“The truth of the matter is that the family, through a proxy, approached the state government and sought approval to bury the late governor on a plot of land at Agodi GRA, which is currently under litigation.

“Incidentally, it was the same former Governor Ajimobi who instituted the legal action. Governor Seyi Makinde had no choice but to state the facts as they are to the emissaries and turn down the request.

“Makinde, however, against the established land use rule in Oyo State, gave approval that the family can bury the late governor in his Oluyole Estate residence. It is to be noted that the rules guiding land use in Government Reservation Areas forbid the burial of bodies in such locations as Oluyole Estate and Agodi GRA.”