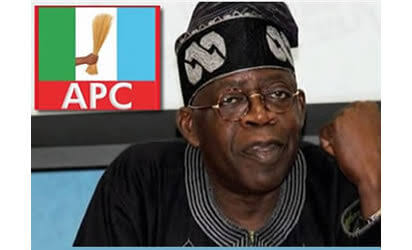 The former Lagos State Governor and the National Leader of All Progressives Congress (APC), Asiwaju Ahmed Bola Tinubu on Saturday spoke on APC NWC dissolution and his purported 2023 Presidential ambition.

In his reaction, he gave insight into his ambition as far as 2023 election is concerned and expressed his bothered heart over the lingering crisis in his party.

“BECOMING THE PARTY WE WERE INTENDED TO BE”

I wish to begin my remarks by commending members of the National Working Committee. Under their collective stewardship, the party earned great and important victories, not least the vital second mandate handed to President Buhari. President Buhari’s victory, and the overall electoral success of APC speak highly of them. Our task as a party is to build upon the progress thus made so that both nation and party may advance to their better future.

Yet, we must acknowledge that something important has gone off track. For some months we have experienced growing disagreement within the leadership of the party. This unfortunate competition had grown so intense as to impair the performance of the NWC, thus undermining the internal cohesion and discipline vital to success.

Some people have gone so far as to predict the total disintegration of our party. Most such dire predictions were from critics whose forecasts said more about their ill will than they revealed about our party’s objective condition.

Predictions of the APC’s imminent demise are premature and mostly mean-spirited. However, an honest person must admit the party had entered a space where it had no good reason to be.

The trouble is not that we would forfeit our collective existence but whether we were in danger of losing our collective purpose. In some ways, this possibility is of greater concern. A political party that has lost sight of the reason for its existence becomes but the vehicle of blind and clashing ambitions. This is not what drove the APC’s creation.

Those who believe Nigeria can be forged into a better nation and deserves good governance must harken back to the establishment of our party. Those who were there and contributed the most to the party’s genesis embraced a common vision. Not only did we believe the venal, purblind PDP was leading the nation into a pit, we sincerely held a common vision of progressive good governance. This was the overriding reason for the APC.

Those most intimately involved in founding the party remain faithful to this benign, timely assignment. Sadly, many members have lost their balance. Their personal ambition apparently came to greatly outweigh the obvious national imperatives.

Even in the best of times, Nigeria is beset by myriad challenges. Poverty and economic inequality, insecurity, lack of infrastructure are longstanding obstacles that have blocked our access to national greatness for too long.

Through no fault of our own, we now live in a moment of heightened difficulty. We did not ask for COVID-19 but it has found us. We must deal with it and navigate its rude economic consequences. At the same time we must grapple with the violent insecurity caused by increasingly desperate terrorists and criminals. People need concrete help from us. We must focus on building roads and creating jobs. For the average man, watching politicians wrestle for position is a poor substitute to seeing politicians working for the benefit of all.

Yet, such intramural fighting has come to occupy the attention of many high ranking party officials and members.

The National Working Committee, itself, became riven by unnecessary conflict. Those who disagreed with one another stopped trying to find common ground. Attempts were made to use the power of executive authority to bury each other. I must be blunt here. This is the behaviour of a fight club not the culture of a progressive political party.

Some members went against their chairman in a bid to forcefully oust him. In hindsight, his fence-mending attempts were perhaps too little too late. I believed and continue to believe that Comrade Oshiomhole tried his best. Mistakes were made and he must own them. Yet, we must remember also that he was an able and enthusiastic campaigner during the 2019 election. He is a man of considerable ability as are the rest of you who constituted the NWC.

It had been my hope that the disagreements could be resolved. After all, a political solution should not be beyond the ken of leaders of a major political party. But such resolution has failed to materialise. It was as if some unseen but strong force continued to stoke the embers. Instead of calling a prudent ceasefire, too many people sought more destructive weapons against one another.

Order, party discipline and mutual respect went out of the window. Members instituted all manner of court cases, most of them destructive, some of them frivolous, none of them necessary. In the process, a dense fog fell upon our party.

When this matter first came to a boil a few months ago, I issued a statement against this litigious tendency. President Buhari and former interim chairman Akande published strong words against this misuse of the courts as being contrary to the spirit of the party and the letter of its constitution. Each of us knew nothing good would come of such conduct. Instead of listening to this counsel, party members increased their trips to the courts. While busy providing ample livelihood for a gaggle of lawyers, these actions cast the good of the party to the wind.

After the fusillade of lawsuits and countersuits, two NWC members laid competing claims to the chairmanship. One legitimately elected at our national convention; the latter whose claim was based on the questionable suspension of the former.

With lawsuits so numerous one needed a spread sheet to keep track, President Buhari has reasonably decided that he has seen enough.

I do not lament his intervention or its outcome. I lament that the situation degenerated to the point where he felt compelled to intervene.

President Buhari is much more than a mere beneficiary of the party. He is one of its founding fathers. The APC does not exist in its current form without his singular contributions. That is not opinion; it is undisputed fact.

Given these antecedents, he cares about the condition of the party as any parent would care for its offspring. President Buhari has done what any parent in his position and with his authority would do. The more troubling consideration is that so many trusted people acted in such a way as to force the president to put aside the issues of statecraft in order to address these problems.

The President has spoken and his decision has been accepted. It is now beholden on all of us, as members of the APC, to recommit ourselves to the ideals and principles on which our party was founded. While we recognize that people have personal ambitions, those ambitions are secondary, not sacrosanct. Members must subordinate their ambitions to health and well-being of the party. Never should our party be defined by one person’s interests or even the amalgam of all members’ individual interests. A successful party must be greater than the sum of its parts.

In this vein, I appeal to all former members of the National Working Committee and all members of our party to sheathe their swords and look to the larger picture.

We have governorship elections around the corner in Edo and a primary and elections in Ondo. On these important events we must concentrate our immediate energies. In the longer run, we must restore the collegial nature to the party so that it should be in the practice of coming to support the President instead of him having to rescue the party from itself.

In Edo, we must rally round our candidate Pastor Osagie Ize Iyamu. In this, Comrade Oshiomhole has a crucial role to play. I congratulate him for his equanimity and loyalty to the party and our President in accepting the dissolution of the NWC. I encourage him, now, to return to Edo State to energise the campaign for the election of Pastor Ize-Iyamu.

In Ondo, we must set the procedures for primaries and conduct that exercise in a fair, transparent manner that shows the Nigerian people the party has left turmoil behind.

In addition to the daily operation of the party, the Caretaker Committee has the mandate to prepare for a mini national convention within six months. We must give the committee the support needed to fulfil this assignment in an impartial manner.

As I understand it, no one has been precluded from seeking any party office to which he is otherwise eligible. Former NWC members are free to seek re-election to the NWC. Provided they have the support of party members, they will have an opportunity to return to serve the party in a leadership capacity. This reflects our overriding desire to restore and maintain internal democracy not subvert it.

To those who have been actively bleating how the President’s actions and the NEC meeting have ended my purported 2023 ambitions, I seek your pity. I am but a mere mortal who does not enjoy the length of foresight or political wisdom you profess to have. Already, you have assigned colourful epitaphs to the 2023 death of an alleged political ambition that is not yet even born.

At this extenuating moment with COVID-19 and its economic fallout hounding us, I cannot see as far into the distance as you. I have made no decision regarding 2023 for the concerns of this hour are momentous enough.

During this period, I have not busied myself with politicking regarding 2023. I find that a bit distasteful and somewhat uncaring particularly when so many of our people have been unbalanced by the twin public health and economic crises we face. I have devoted these last few months to thinking of policies that may help the nation in the here and now. What I may or may not do 3 years hence seems too remote given present exigencies.

Those who seek to cast themselves as political Nostradamus’ are free to so engage their energies. I trust the discerning public will give the views of such eager seers the scant weight such divinations warrant.

Personally, I find greater merit trying to help in the present by offering policy ideas, both privately and publicly, where I think they might help. I will continue in this same mode for the immediate future. 2023 will answer its own questions in due time.

I have toiled for this party as much as any other person and perhaps more than most. Despite this investment or perhaps due to it, I have no problem with making personal sacrifices (and none of us should have such a problem) as long as the party remains true to its progressive, democratic creed. Politics is but a vehicle to arrive at governance. Good politics promotes good governance. Yet, politics is also an uncertain venture. No one gets all they want all the time. In even a tightly-woven family, differences and competing interests must be balanced and accommodated.

My fellow party members who now feel aggrieved by the NEC meeting I urge you to accept the sacrifice you have been asked to make so that the air can be cleared, the party can assume its proper role of helping this government lead the nation toward enlightened improvement, and the party itself can grow and firmly establish itself as the best, most democratic party in the land.