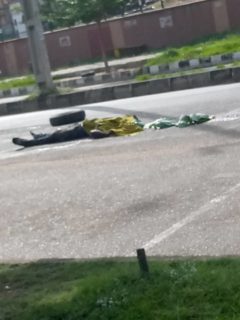 Pandemonium struck out on Tuesday morning at Olaiya area Osogbo when an unknown body of a man was seen on the road.

The incident occurred in the early hours of today leading to an uproar in the state capital.

Mouthpiece NGR gathered that the unidentified corpse was found along Ogo-Oluwa road with shoe missing on one leg and a tyre is lying near it while it had no head.

“Residents were in panic and quickly informed police officer about the unfortunate incident”, said an Eyewitness.

He said they were surprised, kept wondering and aghast at what must have led to the tragic and premature death of the young man.

“Police men, civil defence officers and health workers had already showed up at the scene and done the necessary things,”