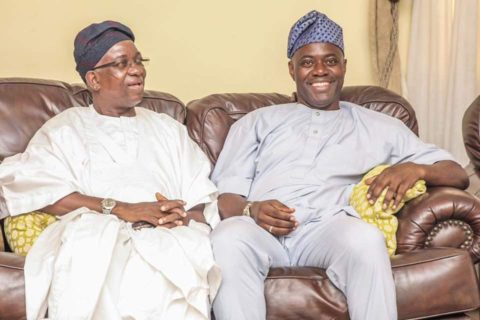 Anyone in Oyo state and by extension Nigeria who followed keenly turn of events in the state since 2011 till date would easily understand why some desperate elements could not be healed from the terrible ailment called ‘pull down Makinde at all cost syndrome’ that has struck their camp but it is our prayer that they receive their healing soonest.

Even though politics is a game of trying to outwit rivals or opponents as the case may be, it should never be done outside decorum and every sense of caution else, human sanctity may be reduced to nothing.

It is of credible note that Governor Seyi Makinde has not only redefined leadership through delivery of good governance in the state, he has also successfully changed the political narratives from politics of bitterness to politics of friendship the way it is played in more civilized society by giving opportunities to almost everyone to contribute to governance of the state once you have the requisite skills regardless of political affiliation.

This approach which has continued to make Makinde the toast of many political elites even across party lines has become an unfathomable threat to opposition’s political aspirations in Oyo state even as 2023 daily draws closer.

They (opposition) in actual fact made countless attempts at trying to discredit Makinde’s government despite its giant strides that has has seen the state witnessed astronomic transformation in terms of the state physical outlook, improved human welfare, dignity of labour, and the collective resolve by the people to support government to succeed.

The Makinde/Olaniyan team has been described by many political watchers and analysts in the state and across the country as the best combination that ever happened in the history of governance in Oyo state not only because they are from the same professional background but because the unity of purpose and bond of brotherhood between them has been incomparable as far as being governor and deputy governor are concerned in Oyo state.

We have witnessed in recent time past where a governor glorified his wife above his deputy, an absurd situation and despicable act that never caught the attention of Makinde and Olaniyan detractors to make move to correct as long as they were not stripped of the rare privilege to bootlick.

We understand that there’s an orchestrated plan to create disaffection between God sent man as people now preferred to call Makinde and his deputy whom pundits have labelled Makinde’s brother from another mother because of the love and strong bond between them.

Governor Makinde since assumption of office has continued to nurture and grow the relationship between himself and his deputy, Engr Rauf Olaniyan by according deputy governor the full honour and benefits of the office of the deputy governor.

As a result of the bond and love between the governor and his deputy Engr Olaniyan has been cardinally instrumental to facilitation of some developmental projects and key political appointments especially from Oke ogun zone such as Ibadan-Iseyin road construction, resuscitation of Ikere dam, expansion of Saki township road among others.

Sane minds would ordinarily wonder if such move to create disaffection between a performing governor and his deputy was born out of deceitful move to divide the state along ethnicity and religion lines or part of calculated move in the race for 2023.

During the era of the last administration under former governor Abiola Ajimobi, we are all witnesses to how a sitting deputy governor was so relegated that he could not even make nomination for any appointment even as low as supervisory counsellor in any local government in oke-ogun let alone make inputs to any project throughout eight years.

Governor Makinde despite his vast knowledge and experience in civil engineering has continually relied on inputs from his loyal and versatile deputy with vast experience and high reputation in construction engineering which has led to the rapid development in road construction and rehabilitation across the state under the space of one year.

The deputy governor has represented and will continue to represent the governor at top government functions within the state and across Nigeria because of the trust the governor has in his deputy to hold forth in his stead anywhere anytime.

It is however shocking to us in PDP how members of the opposition out of hallucination and disillusionment could descend so low in its way of politicking to designed such evil, malicious, and none existent story to cause disaffection between two brilliant pairs.

We are not unmindful of the fact that a serving Senator who is reputed for what is now used in local parlance across the state as ‘baba pakute’ (trap setter) had made an unfounded allegation of the deputy governor’s isolation from power while the governor was in self isolation for COVID-19 but we must stick it down their brains that the governor and his deputy are always on the same page.

We also understand that one of the adverse effects of desperation in humans according to psychologists is suicide tendencies, even though we as the ruling party expected vibrant opposition as it brings about the beauty of democracy, we can not help opposition party(s) especially the All Progressives Congress (APC) that has willingly chosen the path of political suicide from dying natural death in the state since it was labeled a ‘political party that should never exist in any society’.

For the sake of records, Engrs Seyi Makinde and Rauf Olaniyan have no disaffection of any form or bad blood between them therefore, a case of denying the deputy governor the due honour and benefits of his office never arose as he has continued to diligently carry out his duties at his duty post with full benefits as the number two citizen in Oyo state.

Let it also be on record that now that another failed plan by the opposition to cause disaffection particularly along ethnic and religious lines have been bursted we expect their next onslaught in their usual way of playing mundane and old fashioned politics, and at the appropriate time their political party will be finally buried in Oyo state.