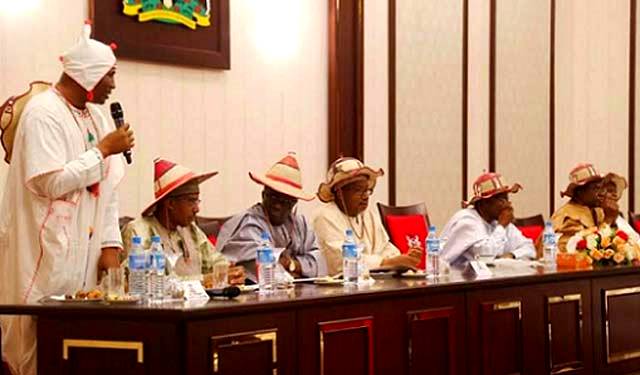 The Indigenous People of Biafra, IPoB, weekend, fires back at the Miyetti Allah Cattle Breeders Association of Nigeria, MACBAN.

IPOB has claimed that the herders’ group is a known architect and breeder of many terrorists groups victimizing the country since the inception of President Muhammadu Buhari in 2015.

IPoB made this revelation in reaction to a statement by one of MACBAN’s leaders, Saleh Alhassan, connecting the group with Obedient Movement.

The Media and Publicity Secretary of IPOB, Emma Powerful, has via a statement titled ‘Miyetti Allah terrorist group and their Igbo phobia mentality’ said: “The attention of the global movement and noble family of the Indigenous People of Biafra, IPoB, under the leadership and command of our great leader Mazi Nnamdi Kanu, has been drawn to the laughable and disgraceful statement credited to one of the leaders of MACBAN, Saleh Alhassan, linking IPoB movement to the so called Obedient Movement, when they have never linked their Fulani presidential candidates to Boko Haram terrorists and bandits, even when it is evident to all that they are co-sponsors of the terror groups violent activities in Nigeria.

“Miyetti Allah is a known architect and breeder of many terrorists groups terrorising Nigeria since Major General Muhammadu Buhari, took over power in 2015.

IPoB knows that these terrorists masquerading as cattle herders constantly linking Peter Obi with IPoB and Biafra agitation are doing so because of their hatred against Igbos and their fear for Biafra.

“They never linked their Fulani presidential candidates to Boko Haram terrorists and bandits even when it is evident to all that they are co-sponsors of these terror groups’ violent activities in Nigeria. Miyetti Allah is a known terrorist supporting and sponsoring group and it knows that the current Presidency of Nigeria elevated and stylishly glorified it to be the 4th level of Government in Nigeria.

“MACBAN is pretending to be not well informed to know that IPoB does not engage in seasonal jamboree and selection process called Nigerian election. We regret that a man like Peter Obi is involved in and playing the dirty Nigerian politics, but on the other hand sympathise with him that he will suffer to make Nigeria better and will not be appreciated at last.

The Caliphate and their terrorists attack dogs in Miyetti Allah should, therefore, face their political opponent and stop linking Peter Obi with IPoB agitation. If Peter Obi believes in what we are pursuing, he would not have come out in the first place to contest for Nigeria President.

“The Nigerian terrorist-sponsoring and pampering government and their brothers linking Peter Obi with IPoB agitation means they have exhausted their blackmail against Peter Obi, hence they have resorted to tribal politicking.

“Saleh Alhassan and his Miyetti Allah terrorist group should stop exhibiting their cluelessness and stupidity in the public because everybody knows their role in the current insecurity situations bedeviling Nigeria.

“Again, to say that IPoB has fallen into obedient structure is a joke taken too far and an insult to this noble movement and to the spirits of all our heroes and heroines who have paid the ultimate price for the freedom of the Biafran people and for the restoration of our Sovereignty.

“The Igbo people rallying behind Peter Obi are not IPoB members because IPoB doesn’t want the evil and murderous contraption called Nigeria to continue to exist and we must break and disintegrate from the Nigeria enterprise, irrespective of whether Peter Obi or anyone else from the Biafran geographic space is contesting in the Nigerian farce of an election.

“Nigerians should understand that not every indigenous Igbo, Ibibio, Anang, Izon, Ogoni, Urhobo, etc. from Biafra extraction support the Biafra agitation by IPoB. While some are in support others are against. That is the democratic nature of Biafrans which only Referendum will settle. If the Miyetti Allah thinks that every Igbo person supports Biafra freedom, then they should examine their brain in a psychiatric centre.

“IPoB is not interested in Igbo Presidency or a Nigeria President from Biafra extraction. Our mission is simple. Nigeria must allow Biafra freedom or cease to exist as a country so that all the Nations imprisoned in it can regain their liberty, freedom and dignity.