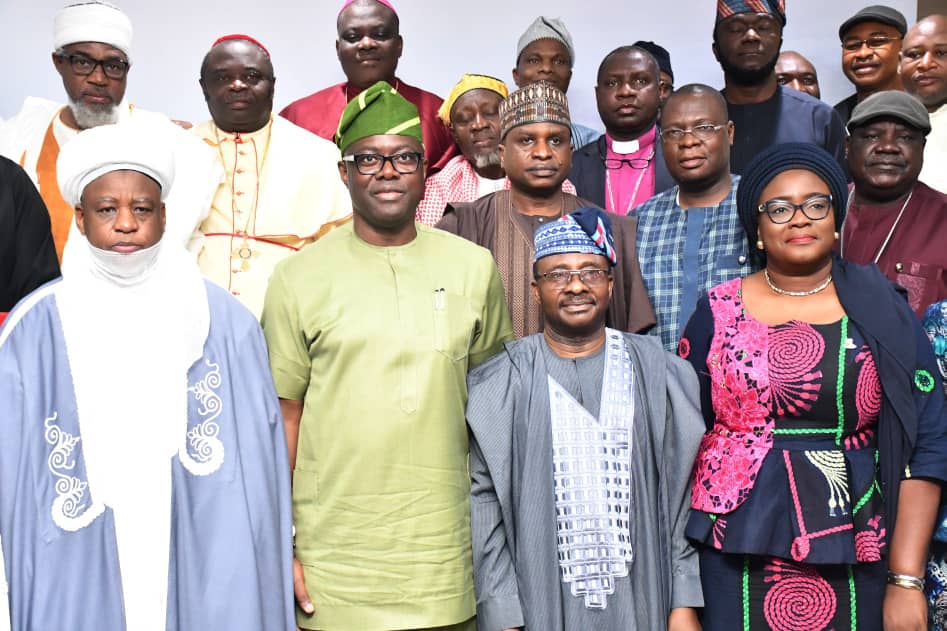 Oyo State Governor, ‘Seyi Makinde, on Thursday, declared that his administration will continue to maintain the religious harmony and peaceful co-existence in the state despite the religious diversity in the state.

The governor, while receiving the members of Nigeria Inter- religious Council (NIREC), led by the Sultan of Sokoto, His Eminence, Alhaji Sa’ad Abubakar III, and the President, Christian Association of Nigeria (CAN), His Eminence, Rev. Dr. Supo Ayokunle, at the Executive Council Chambers, Governor’s Office, Secretariat, Ibadan, said that Oyo State has remained peaceful, despite its diversity.

He appreciated NIREC for taking their quarterly meeting to the State in honour of the President of CAN, Rev. Ayokunle.

A statement by the Chief Press Secretary to the governor, Mr. Taiwo Adisa, quoted the governor as saying that the meeting was coming at the right time, particularly as the general election is knocking on the door.

He said: “What you stand for is what Nigeria needs especially at this time that election is approaching. I know that conversation will take both ethnic and religious colorations. That is why we have been hearing of Muslim-Christian ticket, Muslim-Muslim ticket and all of that.

“Before we did the national convention (of the PDP), we were looking at where the presidential candidate would emerge from – maybe from the South, East, West or North or somewhere in the middle. And even after the emergence of the candidates, discussions have been around the support for either the candidate from Yorubaland or whether the Northerners will support their own candidate.

“So, we need people like you to speak out in order to douse tension and nudge the nation in a direction of progress. Well, so far, we are not evaluating the candidates on what they can offer Nigeria.

“It is also gratifying that you moved your quarterly meeting to Oyo State to honour the outgoing CAN President and I want to thank you for that and pray that as you honour one of our own, God will honour you individually and collectively.

“Oyo State, just like the CAN President said, is diversified. Hardly will you see a family in which you would not find the two faiths, and for me as a person, the Makinde you see in my name is my grandfather’s name. He lived and died a Muslim.

“This is what you see in Oyo State and we live together in peace. So, that is the spirit we have seen around here. Despite our diversity, Oyo has remained a peaceful and welcoming state to all.

“Sometimes ago, when some elements wanted to instigate ethnic-based violence, we shut it down immediately. I tell my people the problem with us is that we look at the cake and everybody is struggling to take their bits. “But here, what we are saying is to make the cake bigger so that there can be enough for everybody.

“Our people live peacefully together, looking for what to eat, but when we the elite want to gain political power, what do we do? We try to create divisions along ethnic and religious lines.

“NIREC gives us an opportunity to let the people have clarity about where we should be headed as a country.

“The push in Oyo State is to take our people from poverty to prosperity irrespective of their religious or ethnic leanings.

“I really feel highly honoured for you to have brought the meeting to Oyo State. I welcome you.”

In his remarks, the Sultan of Sokoto, His Eminence, Alhaji Sa’ad Abubakar III, commended the governor for uplifting the State by taking it to greater heights.

He said: “We want to thank the governor for his magnanimity and wish him all the best in his tenure as the governor of Oyo State. I thank him for hosting us and I pray that peace will continue to reign supreme in Oyo State and Nigeria at large.

“I am not a visitor to Ibadan and Oyo State but a bona fide family member of this state because as a young officer, I served from the remote areas of the state and I know Ibadan very well.

“I am very proud of Ibadan, the largest city in West Africa, and I think people should really come in and see the difference in what it used to be in those days of our nationhood and the new Ibadan and Oyo State, and the peace you are enjoying here now. I believe this is simply based on understanding. We keep on telling our people to understand and tolerate one another, which is a better way to live as one big family. That is why the theme of this quarterly meeting is apt and widely chosen.”

Also, speaking, the President, Christian Association of Nigeria (CAN), Rev. Dr. Supo Ayokunle, said that there has been religious harmony in Oyo State, adding that people  have been living together in the atmosphere of peace and tranquility.

According to him, “there has not been religious crisis in Oyo State and there will never be by the grace of God because all of us from different homes have the two religions. We have been existing together in the atmosphere of peace and tranquility, and that is why we are a Pacesetter state. We make progress because of mutual existence in this state.

“We also welcome visitors as Ibadan is about the largest city in Nigeria and it is because the state is welcoming to visitors. We accept you irrespective of your religion or background. As long as you are not a criminal, you can make ends meet, become a citizen and contribute to the progress of the state.

“We have been discussing so many issues that would have led to crisis across the nation and thrash them in our meeting, which has contributed to the peace we are currently enjoying in the nation. We have always advocated dialogue and it is yielding the expected results. The more we have inter-religious education, the better we are.

“Yes, there are some misgivings about each religion, which some bad elements amidst us capitalised upon to miseducate others to make the people think the two Abrahamic religions are opposed to each other. So, those are the kind of issues we always rise against in our meetings.”