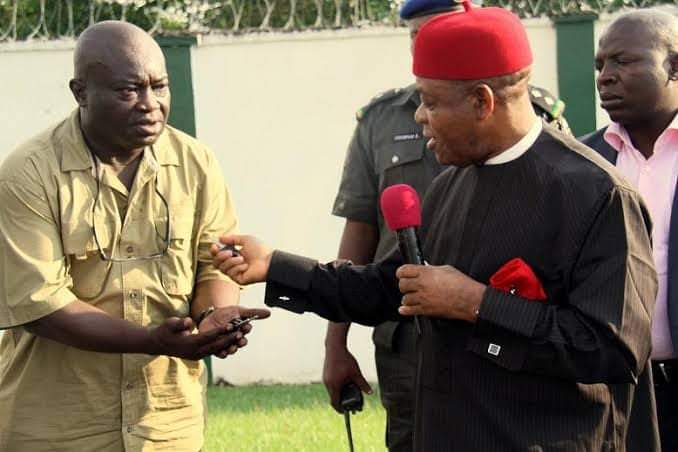 A pressure political group under the aegis of Abia Arise Group said if there is one Governor in Nigeria today that is praying to quickly drop the staff of office and run away, that should be the Abia State Governor Okezie Ikpeazu.

The group in a statement obtained on Wednesday alleged that Governor Ikpeazu is only concerned about the new list of commissioners but overwhelmed and presently confused with the problems of the state as he doesn’t know when and how it will end.

According to the group, when many states are still rolling out befitting programmes, Abia only news after the Commissioners list is the inspection of an old acquired refurbished building allegedly belonging  to Okezie Ikpeazu’s family that has been on for four years by the Governor, his wife, SSG and the uninspiring Commissioner for Health who can’t stand any intellectual engagement on Covid 19.”

The statement reads: “We don’t need to be told that he is completely spent, what has just confirmed this is the new list of Commissioners. He is likened as someone saying since you want Commissioners, see them and leave me alone.”

“He is so overwhelmed and presently confused with the problems of the state that he does not know when and how it will end.”

“How can he start, is it the roads that have all gone bad, the current state of the finances of the state that has made it practically impossible to even pay MDAs not to talk about other units and the mismanagement of the loans from banks that have taken  their repayment amount to an all time high of about N2B monthly.”

“The many negatives on the media about the government. If it’s not about mismanagement of world bank programs, it’s about the 3.8B JAAC loans,or the current Prado scam at 78M per LGA and many other  ills of the government.”

“Will the Governor ignore the current EFCC search light on Abia State finances that has made his predecessor and benefactor a regular visitor to Jabi office of EFCC with his Son the Speaker. Does he sleep at all understanding that eyes and nose are interwoven, interrelated and intertwined.”

“Okezie Ikpeazu today does not sleep at all as he gazes on the POP all through the night asking himself how he found himself in this mess, though the early warning signals were ignored on alter of being obedient to ones benefactor.”

“When he remembers that he still has about 16 months to the handover date, he prays this cup passes over as fast as possible. Our people say if you fart while asleep the gods will wake you up to perceive the smell.”

“Many states in Nigeria that are focused are still rolling out programmes to improve on their agreed deliverable. Kaduna State even with militancy is organizing their economic summit KADINVEST. This is the 6th edition even with all that the state has gone through.”

“Oyo State is busy with Agricultural summit in partnership with OPS. Abia only news after the Commissioners list is the inspection of an old acquired refurbished building allegedly belonging  to Okezie Ikpeazu’s  family that has been on for four years by the Governor, his wife, SSG and the uninspiring Commissioner for Health who can’t stand any intellectual engagement on Covid 19.”

“Can Abia State government come out clear on the real ownership of this Mother and Child hospital that cannot take more than 20 bed spaces.”

“We hope this is not another Mecure arrangement during Sen TA adminstration that has remained intractable till date.”

“To divert the attention of traumatized and hypnotized Abians, the government has gone on air/social media to invite few contractors for a meeting as if they dont have the contact of these contractors. Abians can never be deceived again.This strategy worked in 2008 and Abians are wiser. These contractors have been around long before the rain increased lately, why the media attention as if the meeting with the same government officals will bear an fruit.”

“The Chinese contractor at Center table Osisioma confirmed that they have unpaid voucher of N390m for over 7 months.”

“What will be the outcome from the contractor at Faulks road that refused to do final coating of the road unless N1b is paid not minding the huge amount already paid.”

“With current mess in the finance of the state ,can this government afford 400m in one bullet payment when few MDAs are yet to be paid August salary. Never again will this government take us for a ride.”

“Okezie Ikpeaze got what he bargained for as  he wants to handover this goverment today and hands off ,then decides whether to stay in Nigeria and take the heat or run for a while but must one day go through the same (furnace)process like his predecessors.”

“God will save Abia.”