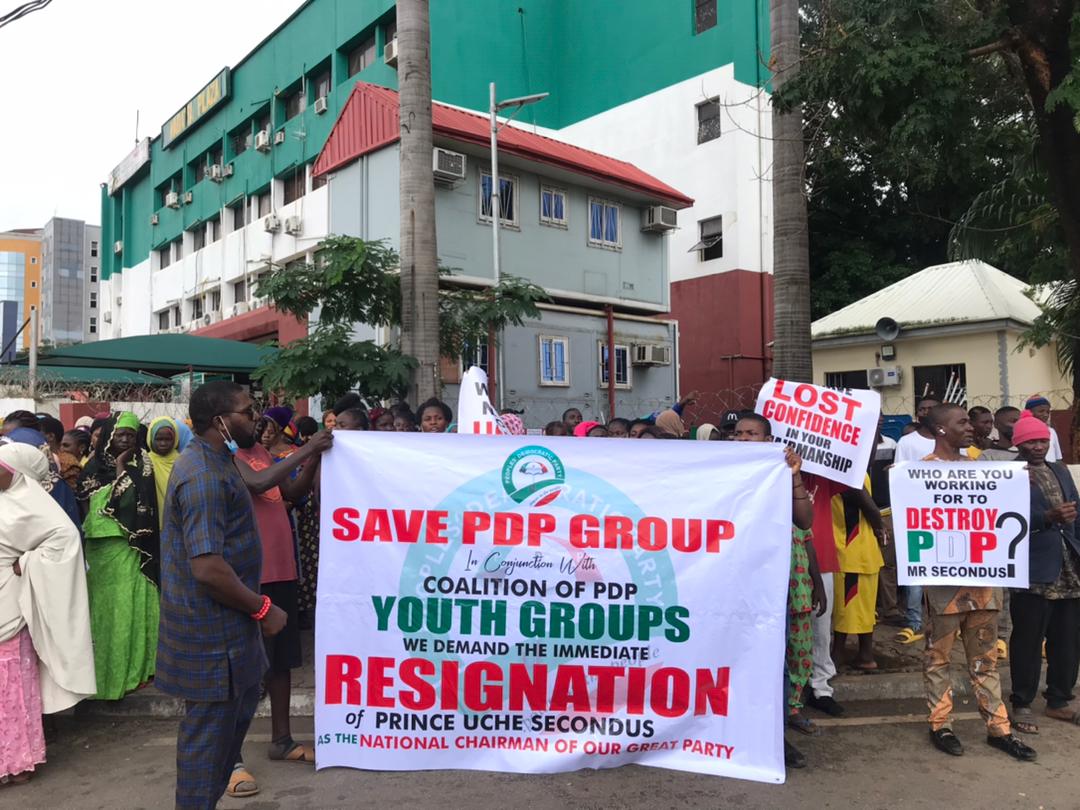 Youths of the Peoples Democratic Party, PDP, on Monday aligned their voices with the calls for the removal of the party’s national chairman, Prince Uche Secondus.

Mouthpiece NGR had earlier reported that Southwest Vice Chairman, Ambassador Arapaja alongside other Vice Chairmen at the early hour of today asked Uche Secondus to resign.

But Secondus, in a swift reaction declared he will not resign, saying the minority calling for his resignation should come clean on his offence.

The PDP National chairman broke his silence in a statement in Abuja by his Special Adviser on Media, Mr. Ike Abonyi.

In the wake of the development, some PDP youths under the auspices of Save PDP Group reportedly arrived the Wadata Plaza, national secretariat of the party, demanding the immediate sack of Secondus as they cited the recent defections of some governors from the party’s fold to the ruling All Progressives Congress, APC as well as Secondus’ leadership style, among others.

Bearing various placards with inscriptions, “Uche Secondus Must Go”, “We have lost confidence in your chairmanship”, “We cannot afford to lose more governors” among others, the youths called on the national chairman to heed the call and quit his office to pave way for the repositioning of the party ahead of the 2023 general elections.

While addressing news men at the party’s secretariat, leader of the protest, Comrade Tamunotonye Inioribo accused Secondus of polarizing the party for his own selfish interest, saying he is to blame “for the defection of three governors and dozens of Senators from the party.”

According to him, organs of the party including, the PDP Governors’ Forum, National Working Committee, National Executive Committee “are all divided.”

Tamunotonye also accused the chairman of creating factions in states for his own selfish ambition even as he noted that most departments of the party have been crippled, owing to what he called a deliberate attempt to weaken the party for selfish reasons.

Worried by intense internal wrangling, the leadership of the party recently convened a stakeholders’ meeting with a view to addressing issues raised by seven national officers of the party who last week, resigned their positions.

Although, a resolution was reached to set up a reconciliation committee, demands for Secondus removal are yet to abate.