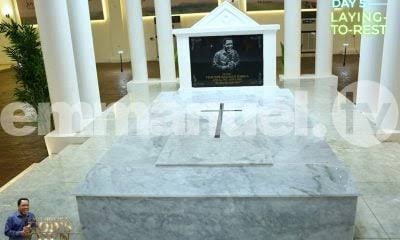 Two artisans in Lagos reportedly exchanged blows during an argument over Prophet Temitope Balogun (TB) Joshua, the founder of Synagogue Church Of All Nations (SCOAN).

The Ondo born cleric was buried on Friday after the candle light procession.

On Saturday, a carpenter and a bricklayer engaged in fisticuffs over the late clergyman.

Mouthpiece NGR gathered that the incident occurred at a hangout spot near North-West Petrol Station near Victoria Garden City (VGC) on the Lekki-Ajah expressway.

According to an eyewitness, the trouble started around 1 pm when the carpenter joined a conversation about the SCOAN founder.

“We were drinking and gisting when someone mentioned the death of TB Joshua. The carpenter said some terrible things. He claimed Joshua used diabolical means”, the informant said in Yoruba.

“But the bricklayer warned him to stop saying ‘rubbish’. That he would not sit and allow any negative conversation about the late Prophet.

“The man said it was when he started attending Synagogue Church that he built a house at Igando and bought his car.

“The other guy insisted TB Joshua was not a real man of God. As the argument continued, they started fighting. The bricklayer injured the carpenter, it was bloody.”

TB Joshua was controversial during his lifetime. He is even more contentious in death with different theories about his spiritual strength.

Since his passing, a higher number of Nigerians have been praising him, insisting that there are many other clerics who cannot be compared with the deceased.

TB Joshua continues to receive accolades for the simplicity of his sermons, philanthropy and humility.