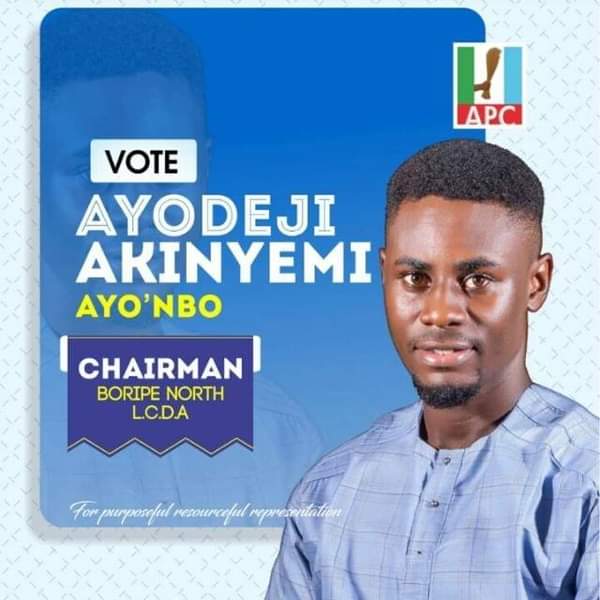 Some days ago, the appointment of Comrade Akinyemi Ayodeji John as a Member of the Caretaker Committee, Boripe North LCDA was announced at the floor of the State of Osun House of Assembly. This indeed is a great development as Ayo’nbo of Ward 5, Aagba, is a true son of the soil that is passionate about the growth and development of Aagba, and Boripe North LCDA generally.

Ayo’nbo, an indigene of Aagba is a duly registered voter in Ward 5 (Aagba). He is currently in pursuit of his second Master’s Degree at the Ladoke Akintola University, Ogbomoso.

Sequel to his announcement as a member of the Caretaker Committee, a lot of congratulatory messages have been rolling in. His royal Majesty- the Alaagba of Aagba, Aagba development coucil, Elite club of Aagba, the Entire Acomoran Aagba, Youths, the community Women, the Elders’ Council and other members of the community are happy with the appointment.

From the information gathered, the said ‘petition’ referred to in the Press Release making the rounds is riddled with forged signatures of relevant stakeholders in Aagba Community, one of which is that of Barrister Tomi Olagunju.

However we have a maradona who at all points have stolen funds belonging to our party.

One bajaj motorcycle and deep freezer that was given as empowerment for vulnerables in the party, how then can anyone believe a story coming from a man of such integrity

We hereby urge everyone to kindly disregard such information as the there is no tension anywhere in the community and Ayo’nbo’s appointment is like putting a round peg in a round hole.