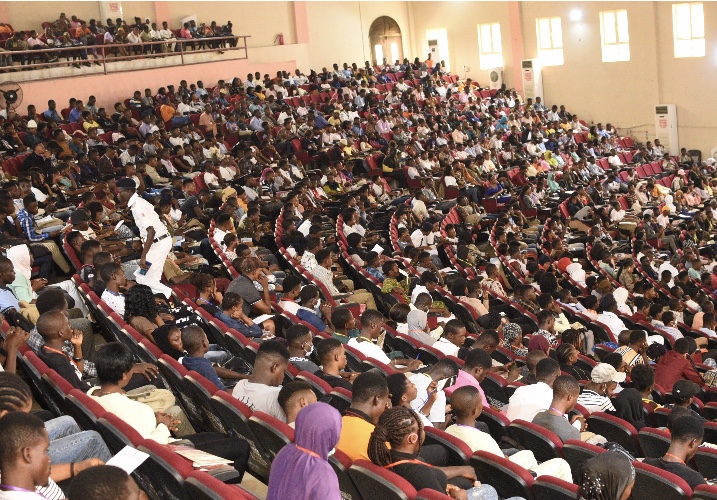 Southwest students have been charged on the need to make themselves relevant and outstanding in whatever position they may find themselves in order to take their rightful position in the leadership of the society.

This was the crux of submissions by various speakers at the Southwest Leadership Seminar organised by the Office of Dean of Student Affairs in conjunction with LAUTECH alumni association on Thursday (June 24, 2021), tagged “Students Union Reforms with the main theme “Ideal Student Unionism: A Tool for Stable Academic Calendar in Universities”.

The event, monitored by Mouthpiece NGR, which took place at the University Great Hall, dwelt extensively on issues affecting students leaders and particularly deviating from the primary objective of students unionism.

Welcoming participants to the programme, the Dean of Students Affairs, Dr Azeem maintained that the leadership seminar will reform student’s ideology and attitude towards achieving matured and responsible leadership ahead of students union election.

Ige said the university management of Ladoke Akintola University of Technology, Ogbomoso, decided to suspend activities of union leaders in March, 2019 because of internal conflict in the union.

According to him, a caretaker committee was put in place to ensure a continued relationship between the students and the school’s management.

While enjoining the students to tap into the benefits of the programme, Dr Ige observed that leadership is a very knotty issue in Nigeria, stressing that leadership is very crucial to the success of any organization or institution.

In his remarks, the caretaker committee chairman, Comrade Olamide Olabiyi pointed out that leadership has become an art to learn and a profession to join”, adding that “within the context of student leadership; one can say it has gone beyond the conventional cliché of “aluta.

“Leadership is far beyond having an ordinary ambition to hold a political office. One thing that is central to leadership is the zeal to serve and effect positive change.”

He then gave a stewardship report of his administration which include commissioning of new Freedom Shed, Lecture pupit across major lecture theater on campus, provision of LAUTECH customized Nose mask, among others.

In his presentation, entitled “ Objectives of Students Unionism in Nigeria Universities”, Hon. Fakorede, who highlighted some hallmarks guiding unionism said leadership is about love and leading by example irrespective of age.

According to him, young ones need to live up to their responsibility. He stressed out the fact that young people shouldn’t act their age and that age doesn’t matter rather than striving to deliver any responsibility assigned to them.

Fakorede encouraged and motivated the student populace by sighting his office in comparison to his age.

The school former Dean of Students Affairs, who also advanced some conflict management tips, stressed out the implications of unruly behaviors among students which has now become so rampant in all universities across the country.

Professor Olabiyisi noted that any damages caused as a result of students unruly behaviors on campus wouldn’t only affect the students but also, academic stability of such institution.

He therefore urged all students to stop any form of unruly behaviors which could hamper the progress of academic stability.

The ex-LAUTECH Student Union President, Mr.  Abiodun Laurel, in his submissions, said that leadership is about responsibility and service, noting that the youth had important roles to play in the society.

Laurel urged all students leaders to work collectively irrespective of affiliations for the development of unionism.

On her part, the UNAB former first female president, Miss Ahmed Adeola, spoke against unhealthy competition among students. She hinted that any competition against themselves should be healthy and always lead to something positive.

Tasking female student on leadership position, Miss Ahmed submitted that what a man can do, a woman can do better.

In his remarks, the former LAUTECH speaker, Alhaji Saleem maintained that no longer will unionism be destructive and counterproductive as was witnessed in the past. He charged students leaders on good conduct and should be disciplined. According to him, “if you are not disciplined, you cannot be a leader.

The last speaker, Comrade Olaseinde Adeyinka NEWTON, however, implored all students leaders to be conscious of security of lives and properties of students. He advised that any of their decision should be in the interest of the students.

Dignitaries at the event included the acting Vice Chancellor ably represented by Professor Prof. Jekayinfa who opened the floor for the commencement of the program.

More than 3000 students attended the program  which cut across tertiary institutions in Southwest region and all participants were given Certificate of participation upon completion of the programme.

The number of participants was adjudged the biggest Southwest leadership seminar in Nigeria.