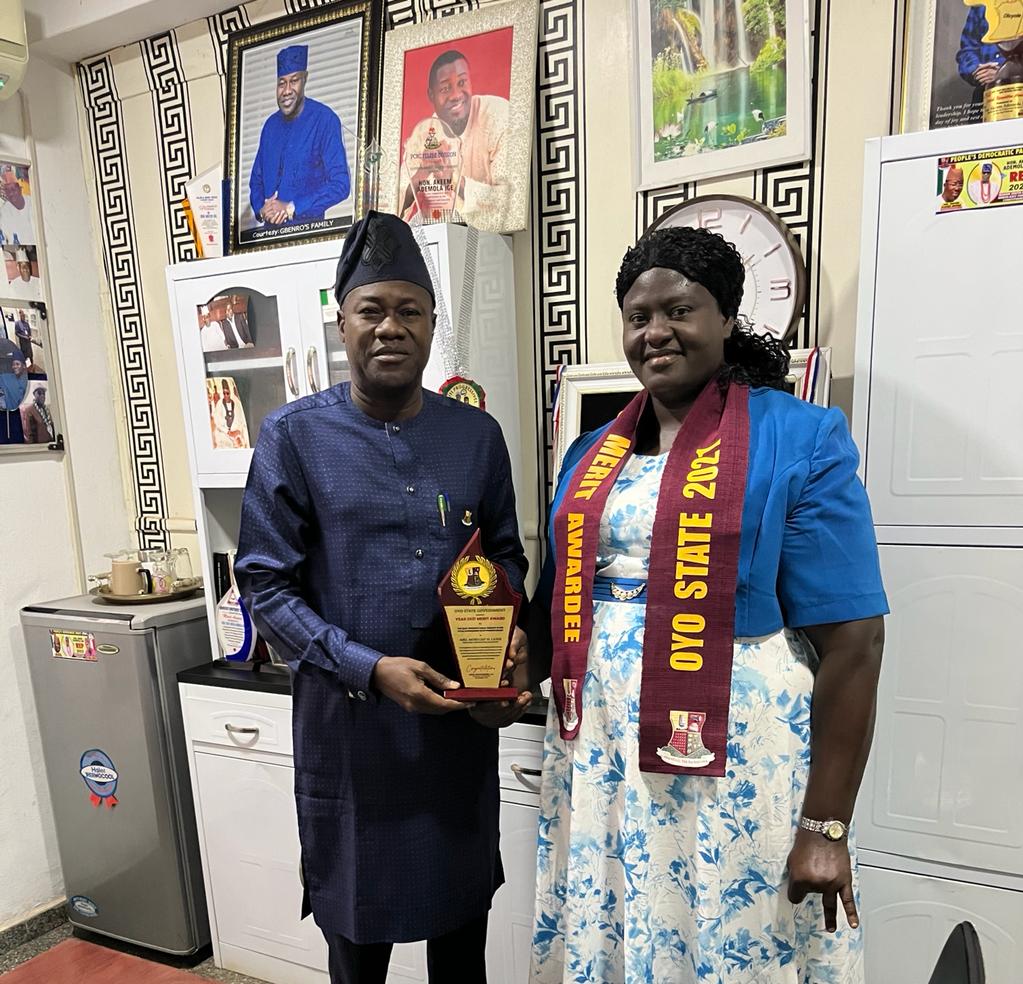 The Special Adviser to Oyo State Governor on Culture and Tourism, Hon. Akeem Ademola Ige has congratulated all civil servants that were honoured for their outstanding performance in the State by the Oyo State Government under the leadership of Engr Seyi Makinde.

Hon. Ige gave the congratulatory message while hosting one of the recipients of the Workers Merit Award, Mrs Lasisi Moriliat Oladayo who was in his office to express her appreciation to him, for giving her the opportunity to get employment in the service of the Oyo State government.

Mrs Moriliat was one of the over 385 unemployed youths that were appointed by Hon. Ige when he was the Chairman of Ibadan South East Local Government area, Mapo between 2003 to 2007.

Hon. Ige who could not hide his joy seeing one of those he employed as the recipient of year 2021 merit award organised for the most efficient public servants in the State, said he is already fulfilling as a man who makes life meaningful to others by giving them means of livelihood.

According to him, “today is one of my happiest days if one is talking about accomplishment, I can say I am fulfilled seeing some of those whom God has used me to assist making such accomplishment in my life time.

I could remember vividly just like yesterday when she was doing her industrial training as a student in my office when I was a council chairman, I found the spirit of excellent in her, she was hardworking, honest, dedicated, agile, humble and always punctual. With all these qualities I saw in her, when it was time to get employment, I said people like her should be considered and that was why she was accommodated. She never lobbied for it. She go it on merit.

When she told me that she is among the recipients of this meritorious awards from his Excellency, Engr. Seyi Makinde this year. I was so happy for her. And I thanked governor Seyi Makinde for being a workers friendly governor.

Immediately she received the award from the Governor, she was coming straight to my office to express her appreciation and said she is dedicating the award to me just like I did yesterday when I dedicated the award I received from Kano to my principal, Engr. Seyi Makinde for his magnanimity and excellent performance.

I am not therefore surprise that she was given this distinguished award because she actually deserves it and I congratulate her and others that were equally so honoured like OYRTMA under the leadership of Hon Dr. Mogaji Akin Fagbemi and Barr. Seun Ashamu, the honourable commissioner for energy for there outstanding performance in this administration.
Today Mr. Lasisi Oladayo is enjoying the benefits of hard work, honesty and dedication. I congratulate all the awardees under the watch of the most disciplined and distinguished head of service in Oyo state, Alhaja Hamidat Ololade Agboola, for being honored and I want to describe all of them as the best workers in the world. ” Hon. Ige submitted.

Earlier in her speech, Mrs Lasisi Oladayo said she decided to dedicate her award to Hon. Ige because without him she might not have had the opportunity of being honoured by the Governor.

Her words: I have come to present the award I received from the Governor to Hon. Ige who happens to be my benefactor and dedicate it to him. He was the one that employed me in 2006 when I was an industrial training student in his office then. I am one of about 385 people that he employed then as a typist on grade level 06.

Hon. Ige is a great example of how those in position of power should emulate. He has planted the seed of his name in the hearts of so many people whose lives he has touched one way or the other. I am just one out of thousands of those people he has helped. A lot of those of us he employed then has become directors, labour union leaders in the state and federal service in there various field. Even those that have opportunity to travel outside the country are doing great in the world. He is very humble, generous and accessible. Other politicians should emulate these virtues he has whenever they have the opportunity of making others happy while in the position of power and I think that is why God has been helping him to be relevant as well.

This award will therefore encourage me to do more in the service of Oyo State government and it is also going to be an encouragement to others also to know that hard work pays and one day there will definitely be a reward.” She enthused.