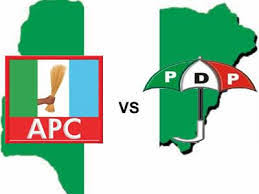 “The All Progressives Congress, APC, is trying hard to refurbish the terribly battered image of it’s administration under late Abiola Ajimobi, lest we forget the memories of what happened during their government”

Across Oyo, large posters are being pasted bearing the portrait of the late politician and former governor of the State. The famous grin – revealing his signature gapped incisors – bearing down upon the people. May his soul rest in peace.

Having fallen from power, the opposition Party has found a form of replenished fanaticism in refurbishing the past inglorious memory of late Ajimobi’s government. Millions of naira has been spent on publicity. Those huge posters across Ibadan metropolis, they remind one of the dystopian social science fiction work of British writer George Orwell [1903-1950], “Nineteen Eighty-Four” in which the ruling party pasted a modified terror-striking picture of the dictator codenamed ‘Big Brother’ on every street corner. It reminded the people of the danger in being disloyal to their oppressors, while eliciting love for Big Brother from a conquered people.

Beneficiaries of the immediate past government are attempting to either alter the course of history or erase it perhaps after coming to terms with obvious reality.

Huge protests, with crowds parked with aged citizens whose participation in state development after years of meritorious service ended on non-payment of pension for many, many months – the state capital in June, 2016.

As a result of the draconian and undemocratic nature of the APC government under late Ajimobi which was famously synonymous to the military regime, labour leaders were arrested, detained in prison facilities and were slammed with trumped up charges.

Other protests in parts of Ibadan had crowds of uniform-wearing secondary school students who demanded that the planned sale of their schools by the Ajimobi’s government be perished.

The innocent students merely demanding for their rights were teargassed. Those occurrences were froth with one common denominator – the APC-led government of eight years. Thanks to Ajimobi, Oyo became the hotbed for massive anti-government protests.

Fond of drawing parallels between the local economy and those of advanced economies of the Western world, policies that were rather incompatible with the realities of citizens were forced on an already impoverished working poor people.

For instance, the First Technical University was created in November, 2012 from the taxes of toiling Oyo people, to be attended only by a class of people who could afford to pay fees running up to 949,500 naira. Conversely, the state-owned Ladoke Akintola University of Technology was being underdeveloped.

It spiralled into the famous LAUTECH Crisis during which the university was shut for two years in which some students who muscled up enough energy to start afresh in other higher institutions have either levelled up or overtaken those in LAUTECH.

Remember those robberies in the castle?

It is easy to refer to “body” and “language” in security today. But for some reason, the APC seems to have forgotten the scandalous robbery of April 2019. It reminds us of the 1935 play by English writer T.S Eliot [1888-1965], “Murder in the Cathedral”.

Scandal mixed with the right amount of sacrilege. The security breach of the decade occurred when a government pilot was driving a Toyota Hiace bus, moving 357 million naira from the late politician’s private residence.

Sahara Reporters asserted that “everything happened between 7:20am and 7:35am”. Shortly after the report appeared, the news went viral. Oyo is yet to see another of that kind of criminal operation being successful at such a record time.

Not leaving out concerns about the story around the money itself, especially its source and the circumstances of the robbery, it was so much for “body language” and “security”.

However, the April 2019 Scandal was just one of the known occurrences regarding cash moving during that government’s closing weeks: an aide in the government, who was put in charge of moving over a billion naira from the Governor’s Office to the residence of late politician, was reported to have stolen some of the money.

Another aide was reported to have diverted campaign funds and was in turn handed over to the then Federal Special Anti-Robbery Squad. And yet another was suspended for mismanaging campaign funds.

There was a series of alarming news on cash transfer within the APC-led government after the loss of the 2019 gubernatorial elections.

It is important to cure the opposition party of its amnesia by reminding them and the enlightened Oyo public that 20 waterworks contracts did not materialize; at the cost of 10 billion naira. Overall, over 90 billion naira went missing between 2011 and 2019 from the treasury of the State. It is not entirely wise to ignore all of those while building a personality cult.

In February 1956, Nikita Khrushchev [1894-1972] warned the world against attempts by political parties and groups to use the techniques of mass media, propaganda, giant posters, spectacles, to create an idealized, heroic, image of a leader, often through public praise.

As members of the opposition Party try to rehabilitate their party’s image, an array of well-documented, onerous practices associated with its days in power stare them in the face. There are several nexus that can be drawn between the practices of opposition Party and its failed ideological predecessor – the Stalinists who covered up the murder of tens of millions of soviet citizens through propaganda, half-truths, manipulation and lies.

Therefore, if they are trying desperately, to repair their party’s battered image, we owe it to the people; traders, pensioners, civil servants, students to remind them of the atrocities committed under their watch, and in their name so that we do not move from frying pan to fire like we had it in 2015 presidential election and now.