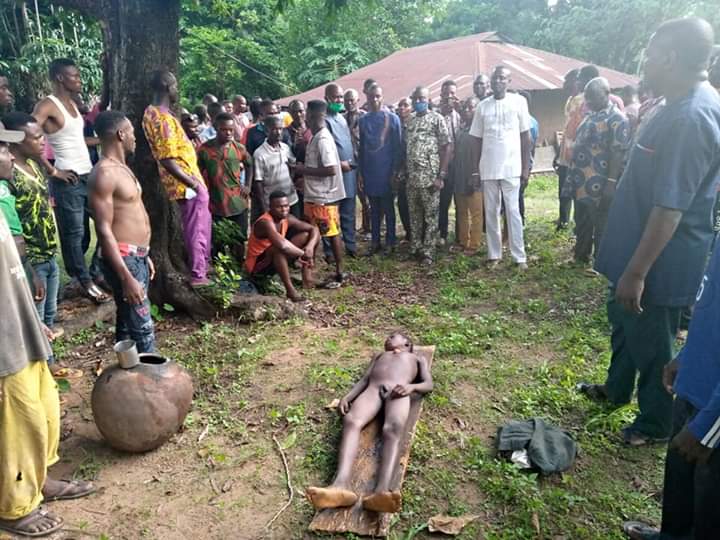 On Tuesday, 19th day of May 2020, the people of Ojiogu village, in Okpochiri, Ukwagba autonomous Community in Ngbo, Ohaukwu Local Government Area of Ebonyi State, woke up to a fresh attack by men in Military uniforms suspected to be Militias from Benue State.

In the attack, it was gathered that a 16-year old boy, by name Chukwuebuka, who until his unfortunate death was in SS1 in School, was killed in a farm very close their house, where he was with his mother, while several others sustained various degrees of gunshot injuries, including a pregnant woman who was shot severally.

When the Chairman of Ohaukwu Local Government Area, Hon. Barr. Clement Omekannaya Odaah was contacted over the attack, the Local Government Boss said that the attack on the people of Ngbo is justified on the ground that they have failed to keep the peace pact reached by the two waring communities by going to farm in the boundary area which was agreed by both Communities to remain unfarmed pending when the boundary is set by the National Boundary Commission.

However, speaking to our correspondents, Comr. Ali Chiadikaobi Ogamde who went to the scene of the attack debunked the claims of the Local Government Chairman who said that the people were attacked in the boundary area whereas they were attacked in their farmlands near to their houses, which is over ten kilometers away from the boundary area where the Local Government Chairman, Barr Clement Odaah claimed that the people were attacked.

He said: “when we got the information that our people were attacked at Ukwagba, we quickly put a call across to the Local Government Chairman, Barr. Clement Odaah, because we know that he is the Chief Security Officer of the Local Government Area, who by constitutional obligations is going to give a Security report to higher authorities. Unfortunately, the utterances of the Local Government Chairman is a miscarriage of what is expected of a man in his position and status. Quoting the Chairman, he said, when the Chairman was contacted, the Chairman said: “killing the people in that farm is a ‘tit for tat’ since they cannot obey the directives of not going to the farm as agreed but chose to violate the peace pact reached.” That call was made in the presence of over 5 people, and it was placed on a loud speaker. It was that unguarded utterance from the Chairman that made all of us who were there when the call was made to take a tour to that particular village where the people were attacked. When we got to the village, we insisted on going to the exact scene of the attack to ascertain whether or not it was at the boundary area as was rumoured by the Barr. Clement Odaah, the Chairman of Ohaukwu Local Government Area. Lo and behold, we got there only to discover that the people were attacked in a farmland very close to their houses, very far from the boundary are.

He wondered why the Local Government Chairman would make such unguarded comments against his own people when he had not visited the scene of the attack nor sent anybody to the place to ascertain the true picture of the situation before dispensing such information. He challenged the Chairman to make out time and visit the village and prove him wrong on the contrary.

The eyewitness who doubled as the mother to the 16-year old Chukwuebuka who was killed in the attack, recounted how the men numbering over 20, all in Military Uniforms with guns, stormed the village at about 12 noon on that fateful day. She said: “We were in our farm, suddenly, a man ran passed me. Looking up, I saw over 20 men in Military uniforms, all heavily armed with guns. The shock of what I saw couldn’t allow me to run. I stood up and wanted to run away, and one of the men ran to me and held me by the hand, pointing the gun at me. I was begging him not to kill me, he brushed me down and slapped me repeatedly. By then, one of the men had fired several gunshots on a pregnant woman who was in her farm close to ours, thinking that she had died, they left her and was pursuing the men there. I was calling on the name of Jesus Christ while the man was holding me down on the ground. And like a movie, he spoke Agila language to me and said ‘Egbonèh, Egbonèh,’ and he asked me to stand up and run. That was how Jesus saved me from their hands with my passionate plea.

It was when he was holding me down to the ground that that my 16-year old son, Chukwuebuka who was with me in the farm saw what was happening and wanted to run towards me because of that filial attachment, and one of the men shot him down. From the way they operated, it was obvious they mainly came for our men, because most of the people they were seriously pursuing after in that farm were men,” she said.

Recall that on 10th March 2020, Men in Military uniforms suspected to be Agila people attacked Ndiegu Orie village in Umuogudu Akpu, in the same Ngbo, in Ohaukwu Local Government Area of Ebonyi State. That attack of the 10th March left ten members of the village killed in cold blood, most of whom were beheaded and dismembered, with houses, barns of yams and other valuables worth millions of Naira destroyed.

And on 18th of April 2020 too, the Military invaded Amakpu-Ishiegu and Otuebu Umugadu villages, both in Umuogudu Akpu Community in Ngbo, burning 44 houses, 17 barns of yam, motorcycles, and other properties worth millions of Naira destroyed, including those who sustained gunshot wounds.

They are appealing to the International Community, Human Rights Organizations, the Civil Liberty Organizations and people of good will to come to their rescue, as the State and Local Government authorities seem to be less concerned about their unfortunate plight at this critical moment of their existence.