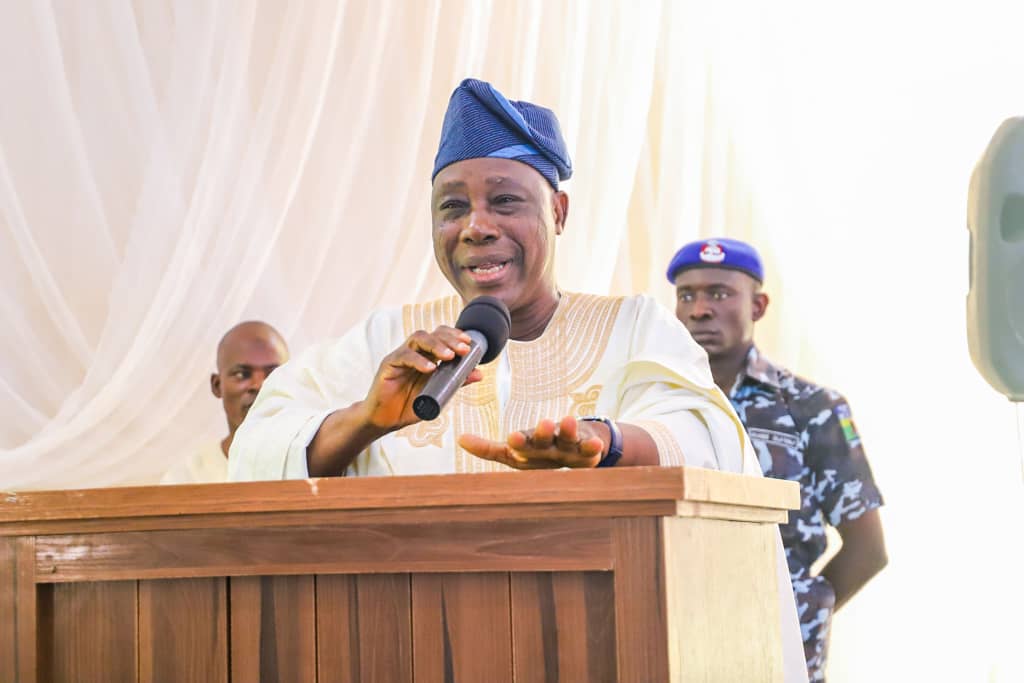 ….O-Shine shines as PDP steal the show at Okeho Day

It’s good to imagine the kind of smile one wore, the feelings one had, and the screaming one gave when you make eye contact with someone you passionately love so much.

This was the case of deputy governor of Oyo state, Barrister Bayo Lawal, upon his arrival at the Kajola Local Government for the celebration of Okeho’s Day held at Playing Ground, Local Authority, (Special) Primary School, Okele, Okeho.

People were spotted cheering the deputy governor’s entrance, including some APC members who were thrilled to see him and were also singing the catchy Makinde 4+4 slogan to support the reelection of Governor Seyi Makinde’s campaign.

The atmosphere was also painted with love and in full acceptance of the candidate of Peoples Democratic Party’s (PDP), for the House of Representatives, Alhaji Shina Oyedeji Oshine, and now, as it seems, they are ready to give the much overwhelming support based on the incident that occurred in the previous election, where he wasn’t voted with a wide margin, which caused the then-candidate of the All Progressives Congress, Hon. Shina Peller, to defeat him in the 2019 election.

The affection for PDP was once more on display when Barrister Bayo Lawal, the deputy governor of Oyo State, took the podium to address the crowd. He started off his speech in a grand manner by praying for the Okeho people and thanking them for their kindness toward him upon his arrival.

The monarchs, whom Lawal referred to as his fathers for holding them waiting so long, including the Okere of Shaki, who are all members of the traditional council of the Oke-Ogun chapter, were seen with smiles during his speech.

“I am glad to be here today on behalf of the monarchs because I am a true son of Oke-ogun and nothing will happen in the zone that I won’t be there for, regardless of my role as deputy governor of Oyo state because of my love and development for the town.

“The celebration of Okeho or Okeogun day is not as important as the growth of the zone. I blame certain people for having the misconception that the position of deputy governor to Oke-ogun is unworthy; they should know that it is a good position that would lead to more development in the zone.”

He continued by saying that with the position, there was a chance that Oke-ogun would develop its own state as time goes on, which the position of deputy can also be helpful to know that it’s not a small position.

According to him, the governor made sure that he could manage various aspects of the government while still serving as deputy governor out of his kindness, and he had made several announcements that his deputy is not a spare tyre but a co-pilot.

He emphasized that when he arrived, he heard people praising Governor Makinde for his developmental efforts, which he said cut across all areas, stating that when he used to travel around Oke-ogun years ago, he had to wear three layers of clothing due to the poor roads, but since the inception of this government, many roads have been built, and more will be built upon the re-election of Governor Seyi Makinde.

He said the construction of the Okeho to Igana road has been included in the 2022/2023 budget and would be completed, he continued, adding that the administration has also relocated the LAUTECH campus to Iseyin.

Lawal emphasized that whatever they will do in the state would spread across each local government, adding that he purposefully asked the chairman of OYSROMA to accompany him so that he could see the roads and make sure that any potholes were filled. “By doing this, you could also see that there were sands and other building supplies in Iseyin.”

“Government may be forgetful, but I’ve brought him here to see for quick action and I also appeal to you to always engage us in wherever necessary you would want us to work on too. This is so to let you know how serious we are about this project.”

While promising that the upcoming election will be devoid of violence regardless of political party, he jokingly asked Hon. Shina Peller and other Oke-ogun candidates in opposition to hold off until he complete 8 years with Governor Makinde for continued developmental strides In the zone.