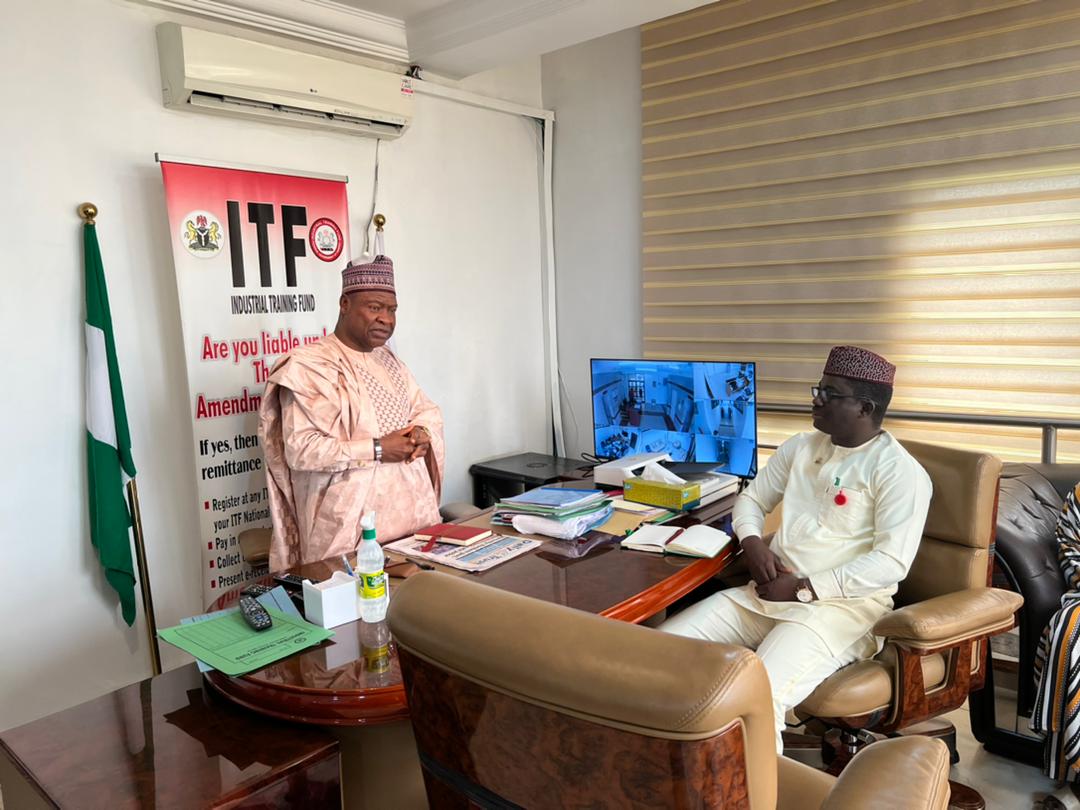 The Director-General of Oyo state Liaison Office Abuja and Lagos, Wale Ajani has made a case for Oyo state indigenes particularly the youths on vocational skills acquisition.

Ajani made the case for Oyo youths during his visit to the Director-general/Chief Executive Officer, Industrial Training Fund in Abuja, Joseph Ari.

This was as Ajani stressed the need for government at all levels to start looking beyond paper qualifications as criteria to providing employment opportunities for the growing population of youths.

The meeting which held at the ITF headquarters in Abuja on Sept. 14 touched on grew areas that could be explored in providing vocational skills for youths in Oyo state in order to become financially self independent and productive members of the society.

Ajani in his opening address listed some strategic efforts of Oyo state Governor and government on human capital development as well as youths capacity building geard towards self reliance and financial independence to include among others, the training of over 3000 youths in various agribusiness fields in Nasarawa state.

The Governor’s aide also listed the conversation of farm settlements to farm estates in Oyo state was targeted at the youths including young graduates maintaining that the investment on youths capacity building and human capital development by the Oyo state government was deliberate such that it is particularly aimed at expanding agricultural value chain, create revolving wealth and also young ‘agripreneurs’ agribusiness entrepreneurs.

Ajani also stressed the need for both ITF and Oyo government to widen its communication and areas of mutual collaboration maintained that all over the world, developed countries and fast developing nations are seriously putting measures in place to create a balanced society where both formally educated and non formally educated people receive the needed vocational and entrepreneurial skills to drive their economy.

Expressing the readiness of the Oyo state Ministry of Commerce and Industry to partner ITF on provision of vocational trainings for youths in the state, Ajani said, human capital development was part of the top priorities of the Seyi Makinde led administration.

“What our ‘God sent man,’ that’s what we love to call Governor Seyi Makinde in Oyo state because we believe he is our own Biblical Moses whom God has sent to rescue us safely out of Egypt to our promised land, is doing is provide enabling environment for investments and businesses to thrive, develop human capital to drive the expanding economy and make the state more prosperous.

“The Governor himself has given a go-ahead for us his aides, to reach out widely both within Federal MDAs (Ministries, Departments, and Agencies) and outside Nigeria with a view to creating more robust relationship that will engender the state economic expansion and growth and we believe that ITF will be a strategic partner to the actualization of that mandate that is why we are here.” Ajani said.

The Director-General Industrial Training Fund, Joseph Ari, in his remarks expressed delight described Ajani’s visit as a proactive step and a right move in the right direction saying oyo state was truly setting the pace under Governor Seyi Makinde.

Going memory lane, Ari gave a background of ITF which was established 51 years ago, 1971 precisely saying the Agency was established mainly to generate a pool of indigenous human capital that would enhance economic growth and development of the Nation.

The ITF boss explained further that paper qualifications alone can no longer be relied upon to fix all the problems of a nation, hence, the need to address the issues of theory and practice. He stated that ITF served as a stop gap for the Nigerian youths to practice their trade and develop themselves for a world of practical experience.

Ari hinted that ITF had brought up alot of intervention programmes across the nation such as the 300 per state vocational training of young men and women which according to him was the best way to address youth unemployment and youth restiveness stressing the need to partner Oyo state but maintained the need for a formal agreement with the state.

He however, tasked the state government to identify trade areas that would be useful and beneficial to the people of oyo state that youths can be selected for vocational training on. He explained further that the Agency had entered into an agreement with the Singaporean government to set up Modern Skill Training Centre MSTC, Modular form of training workshops, and International Certificate Examination.

Commending Governor Makinde for his success stories that have continued to spread and placing premium on human capital development, he said showed that the present administration in Oyo state is a government that practices emotional intelligence.

Ajani on behalf of the Oyo state government and Ari on behalf of ITF however,  resolved to identify some training needs of oyo state youths and select Oyo youths to be trained at the MSTC in Abuja after which another meeting for a yet to fixed date was scheduled to officially formalize the training arrangement.