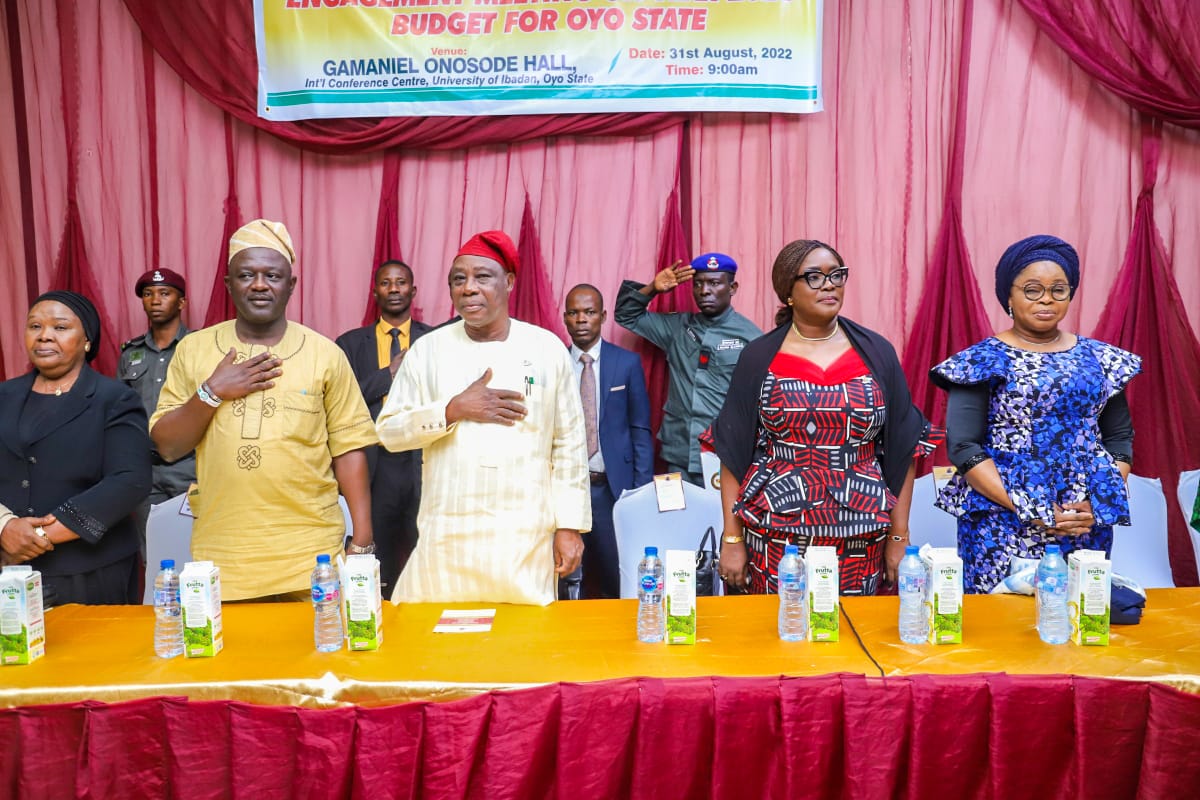 The acting governor of Oyo state, Barrister Adebayo Abdul-raheem Lawal has disclosed that the issue of budget is a very serious matter that everyone need to gather to address pertinent issues, MOUTHPIECE NGR reports.

He explained that there are two ways to prepare a budget by firstly putting facilities in place so that infrastructure can follow.

Lawal, who stated this on Wednesday at stakeholders’ consultative engagement meeting on year 2023 budget for Oyo State at Gamaniel Onosode Hall, International Conference Centre, University of Ibadan, Oyo State, added that it is true to say that people must be involved in the budget preparation process.

According to him, doing so is recommended in economics. Additionally, inclusivity calls for letting the public know what the government is doing to help them and allowing them to contribute, no matter how broad the plan may be.

“I am quite happy that today would serve as the exercise’s official launch and that it will be conducted in several Oyo State zones. This is not the first time we have taken the serious step of integrating our people in budget planning.

“This is the fourth series of stakeholders consultative and engagement meetings we have had with our people in keeping our promise to always involve them in the budgetary process and set your input whenever we are processing the state budget.”

“No doubt, the town hall meetings, one of the many platforms of our engagement and consultation with the people, has produced positive outcomes and is expedient in providing perceptive ideas with valuable recommendations on how to serve our people better. We are indeed encouraged and motivated by your various contributions at the previous Town Hall Meetings held across the seven geo-political zones of the State in the last three years.”

“This time around, and in line with our tradition, we are embarking on another round Town Hall Meetings to give stakeholders the opportunity to contribute towards the direction of the Year 2023 budget. It is our fervent hope that these interactions will bring on board the opportunity to voice your concerns and preferences, while we shall continue to update you on our policies, programmes and plans. We assure you that your opinions will significantly impact our future activities.”

On the various infrastructural and developmental projects embarked upon, executed and implemented between the last quarters of 2021 till date. I am happy to inform you that a good number of these projects are either on-going or nearing completion, completed and commissioned.

On security, crime rate in the state has been on decline as we continue to equip all the security agencies in the State. We have procured and handed over additional 100 operational vehicles to Amotekun and these have been deployed to the 33 Local Government Areas of the State.

We have also commenced the recruitment of additional 500 personnel into the Oyo State Amotekun and the process is almost completed and successful recruits will be trained and deployed to all the local government areas. The Operation Burst security outfit is also being fully supported to enhance their operations.

We are also providing logistic and operational supports to security agencies in the State. With all these supports and intervention, I can considerably tell you that today, our farmers in Oke-Ogun and Ibarapa zones who had hitherto abandon their farms due to security challenges have returned back to various farmland.

We are also rehabilitating a number of schools as well as providing infrastructures such as institutional materials to our schools.

In fulfilment of our promise of ensuring at least one standard primary health care centre (PHC) in each of the 351 wards in the State, we have rehabilitated and upgraded 299 PHCs across the State while the remaining 52 PHCs will be upgraded and equipped before the end of this first term.

Upon our assumption of office, we introduce and commenced free health care mission to the indigent and less privileged people in the State. So far, we have over a million beneficiaries.

We have continued to deliver on our promises on massive infrastructural development that will cut across the state. This administration has embarked on various capital projects that are beneficial to the people in past three years. These include:

• Re-modelling of the Adamasingba Sports Complex, completion of the reconstruction of Moniya – Iseyin Road.

• Completion of the construction of General Gas Bridge, Akobo.

• Completion of construction and commissioned of two bus Terminal bus at Ojoo and Challenge, Ibadan

• Other Projects include the ongoing contract for the installation of mini-grid and energy project in Ogbomoso South , Atiba, Ona-Ara and Iwajowa local government areas. It is also pertinent to mention the on-going construction of a two bay permanent fire station in Atiba, Atiba Local Government and Igboora, Ibarapa local government area.

The lists are endless as we have also provided over 280 kilometre of public lighting through the ‘Light-up Oyo’ Project across the state.

“At the end of this year raining season, we will commence the rehabilitation of rural road through the RAAMP project as we have secured financial support from our development partners for rural roads, agro logistics, market and industrial hubs. This is apart from our investment in the rehabilitation of Fashola Agri-Business Industrial Hub and Eruwa Agri-Business Industrial Hub which upon their completion will contribute and provide direct and indirect jobs for our teeming population, he said.