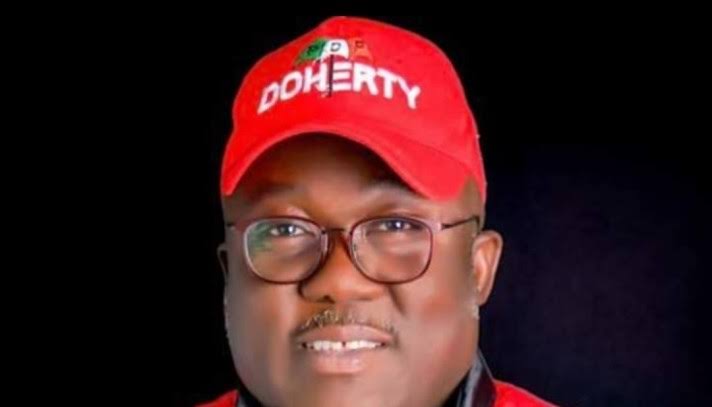 Deji Doherty can’t keep himself hidden for too long. In dirty Masquerade garb, he struts the streets forgetting in his foolish haughtiness that his flank is glaringly open and reeking of his repulsive fart.

Deji Doherty has every reason to hide and he must continue to hide his head in Shame as his name has become synonymous with high level treachery.

The sham of an election perpetuated by himself and Aivoji in Lagos, is the reason he has no rest today and that is why he will degenerate into a half wit clown in order to shroud his misdeed at the Lagos Delegates Congress.

It is on record that Doherty reneged on a general agreement for consensus arrangement and criminally carried out a most foul act by declaring bogus results after delegates had dispersed.

It must be noted that Doherty did not carry out the nefarious deed just because he wants power. No, he did that despicable act for very sinister reasons. Doherty’s mission is to get the Lagos gubernatorial ticket with an even more forbidding aim of selling the ticket to APC’s Bola Ahmed Tinubu who has been his paymaster for years now.

It is not hidden that Deji Doherty is Tinubu’s agent and lackey.

It’s therefore not surprising that Doherty is hiding under the faceless and tactless mucky Lagos Whistleblower group, a rootless group as shadowy as it is repugnant at spreading fake news and information.

Why would he not sell his soul to the devil? It is common knowledge that the event center he parades as his own, is actually owned by Bola Tinubu. We know them with their Baba Isale and will continue to expose these traitors among us.

Their allusion to my position as the Chairman of the ad-hoc Congress Committed is foolish to say the least. My membership is non contestable and deserving of my status in the party.

For clarification, I am a foundation member and leader of the PDP which makes me eminently qualified to serve in any capacity. I’ve served as chairman of the electoral panel since the inception of the party.

It is abominable for the so called Whistleblowers to attempt to vilify the governor, His Excellency Seyi Makinde or Chief Bode George in any manner.

It is highly contemptible that these fraudulent people who should be hiding their head in shame are trying to rub their smelly grime on others.

But for His Excellency and the great statesman, Bode George, the PDP in Lagos would have been in the beck and call of Tinubu.

We thank God for Seyi Makinde who has stabilized the party as the leader in the South West and is relentless at ensuring that the zone thrashes the APC and others in the 2023 general elections.

It is preposterous that Gov. Makinde who wants to win Lagos for PDP, is now being tagged as enemy.

It is not at all surprising that this is coming from known turncoats, Tinubu boys, PDP in the morning and Tinubu in the night.

For Chief Bode George, he has spent almost half his life serving and stabilizing the party.

Yes, Chief Bode George remains my mentor and my leader. Where were the scavengers when Bode George was building the party, making them minister and governors?

The so called whistle blowers, is a fake and cowardly group and the phantom face of Deji Doherty.

If not for his allegiance to Tinubu, how can Doherty, an Ekiti man want to be governor of Lagos state?

I repeat, we know you and your team. You will soon be disgraced.