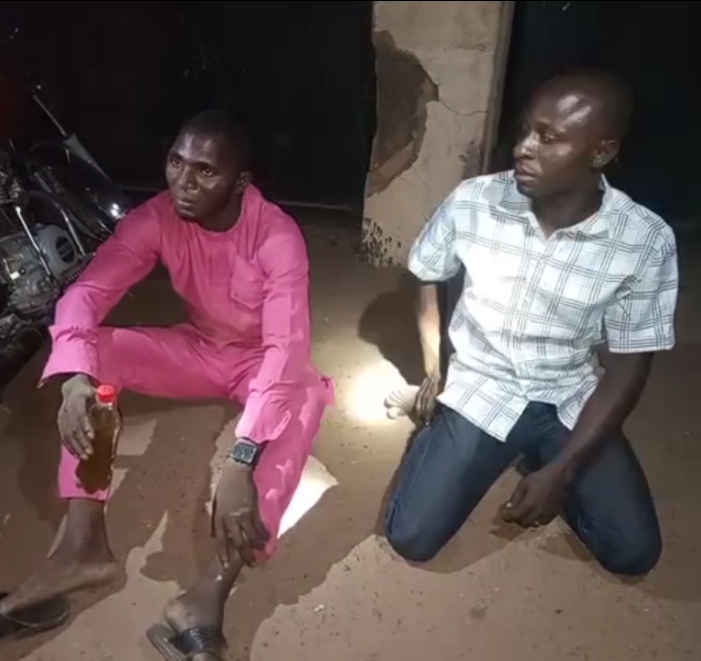 The two young men whose names are yet to be identified were caught and arrested by Operation Amotekun at the secretariat complex(venue) of the Local Council on Wednesday, March 3 while making an attempt to pour an alleged metaphysical water on the floor of the primary’s venue slated for today, but which had been postponed till the next Sunday.

It was disclosed that the two young men confessed that they were sent by Hon. Rasak Fadiran, a chairmanship aspirant who is expected to be part of the postponed primaries.

Amotekun corps added that the two men were sent by Fadiran to wet the venue of the party primaries, so as to spiritually and metaphysically confuse the delegates in order to vote for him and coast home to victory.

All were said to be loyalists of Rasak Fadiran, a contender in the boxed primary election slated for today Thursday 4th of march 2021 but which had been postponed by the State Working Committee of the party till the next Sunday.

Multiple reports says that the Caretaker Committee, Iseyin LG, Hon. Muftau Abilawon who is also a chairmanship aspirant for the primaries had taken the matter up and had immediately informed the men of police force about the unfortunate development.