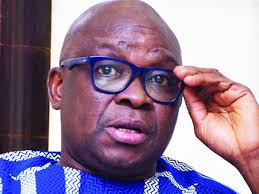 According to the Eleka’s camp, the former governor took a unilateral decision and didn’t carry all leaders and stakeholders along in arriving at the choice.

A political aide to Eleka, Mr. Adebisi Adeola, said the former deputy governor would proceed with his ambition despite Kolawole’s adoption by his former boss, saying “Eleka won’t drop out of the race and would be ready to face Kolawole at the PDP governorship primary next year.”

Adeola, who spoke while featuring on BOTTOM LINE, a current affairs programme on New Cruse 92.7 FM, Ikere and monitored by Online publishers on Monday, said failure to allow party members to freely choose a candidate of their choice has plunged the party into an avoidable crisis and put the party at a disadvantage in its bid to regain power.

He said the PDP must not go to the next year’s governorship poll with a divided house as it does not presently enjoy the status of a ruling party both at the state level and at the federal level expressing fear that Kolawole’s adoption could trigger mass exodus to other parties as it happened in 2018.

Fayose and members of his political group, Osoko People’s Assembly (OPA) at a meeting held at the former governor’s residence in Afao Ekiti at the weekend adopted Kolawole as the preferred governorship candidate, a development being kicked against by party members not comfortable with the decision.

Speaking on the radio programme, Adeola revealed that Fayose had earlier promised members of OPA including Eleka that the final decision on who to support for the party’s governorship ticket would be taken by all stakeholders in June after all the aspirants might have been assessed based on agreed criteria.

Adeola also maintained that Kolawole, whom he claimed did not show interest in running for governor, would now find it difficult to reconcile warring members in the divided party as the state chairman after being drafted into the race by Fayose.

He said: “Former Governor Fayose promised to give all aspirants leverage to contest for the party ticket and he said all OPA members will converge in June to decide but we are shocked that the same person has now decided solely and hurriedly to endorse someone.

“It came to us as a shock that the chairman (Kolawole) that is supposed to reconcile the warring factions and be an arbiter is now being promoted as a candidate. Who is going to be a bridge between the two factions?

“In 2018, we lost the election by 19,000 votes and this was caused in part by those who left to join other parties. We don’t want to lose members again anymore. If the likes of (Prince Dayo) Adeyeye worked with us, we would have been in power now. We are not in power at the state and at the federal.

“Everything is not right in Ekiti PDP, we are not saying he (Fayose) cannot adopt but you have to be transparent and things should be rightly done. Whatever is happening in PDP today should involve all leaders in Ekiti and Southwest PDP.”

On the fate of Eleka’s ambition, he said: “The endorsement (of Kolawole) cannot stand because the party leaders were not consulted. It was unilaterally done, it cannot stand. Prof Olusola Eleka will contest the primary election and by the grace of God, he will win the primary.”

Olayinka, who justified the action of Fayose and his loyalists in adopting Kolawole said endorsement and adoption of preferred candidates by individuals and groups are normal in politics noting that supporters of former Governor Segun Oni and Senator Biodun Olujimi had at one time or the other received endorsement from their supporters.

Olayinka said: “Fayose did not singlehandedly endorse Kolawole, he was endorsed by all those who believe in the leadership of Fayose; we consulted him (Fayose) and he agreed with us.

“The stakeholders met on Friday that this is the decision and this is where we are going. The fact that he (Fayose) has pitched his tent with somebody did not preclude others from contesting or the party from conducting free and fair primary.

“Fayose did not personally collect the money (N2 million each) from anybody. We have OPA chaired by Chief Dipo Anisulowo, we set conditions that for you to be recognised as an aspirant, you must signify your intention, you must write a letter.”

On why Fayose no longer supports Eleka, Olayinka said: “The political permutation in 2018 is different from now; his loyalty to our cause is being tested now.”

Making his own contribution, Ogunbolude expressed concern that other aspirants in the party would not trust Fayose again for publicly identifying with Kolawole saying the development would cause division in the party.

He said: “It affects morality on the part of the leader, Fayose. He has the right to take the decision to support any aspirant but he is the head of the house, he has many children but for siding with a person, he is telling other children to go to hell.

“Others will not look up to Fayose again now that he has taken a position. This will cause further division in the party. If he had allowed other constituents in the party to have a say, things wouldn’t have degenerated this way.”