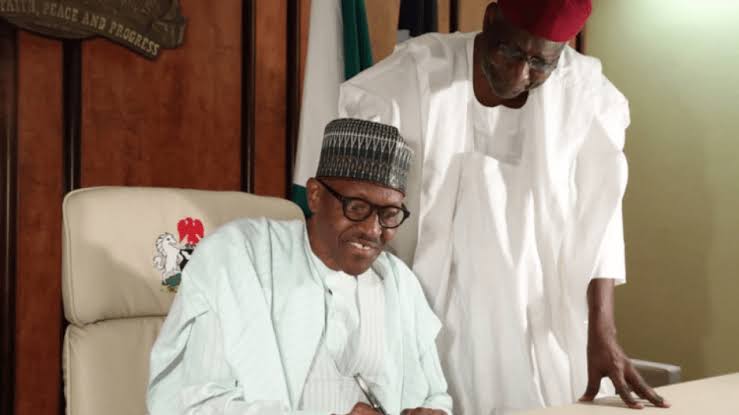 Following the death of Abba Kyari, the dilemma of power balance in the soon-to-be appointed as the new Chief of staff to president Buhari is proving to be a delicate puzzle that must be unraveled with care.
Findings by Mouthpiece NGR indicates that there are currently ongoing clashes of interest in ‘Aso Rock’ and has undoubtedly created a void in the upper echelons of the current regime.
Based on their antecedents as some of Buhari’s closest associates, seven people are likely the probable candidates for Kyari’s replacement.
MOUTHPIECENGR.COM however understands that cabals in ‘Aso Rock’ are wielding power and working tirelessly to ensure the new Chief of staff emerge from their camp.
In the wake of event, seven frontrunners have emerged in the race for a successor to Mallam Abba Kyari, erstwhile Chief of Staff to President Muhammadu Buhari, who died of Coronavirus on Friday and was buried on Saturday in Abuja.
According to informed sources, the seven persons currently competing for the juicy position are Ambassador Babagana Kingibe, who was rumoured to have en handed the position even while Abba Kyari was still on his sick bed; incumbent currently Comptroller General of Customs, Col. Hameed Ali (rtd); and former Military Administrator of Lagos State, Brig.-Gen. Mohammed Buba Marwa (rtd).
Others are the Minister of the Federal Capital Territory Alhaji Muhammad Bello; Adamu Adamu, Minister of Education; Isa Pantami, Minister of Communications and Digital Economy; and Kashim Shetimma from Borno State.

Kingibe, who was born on June 25, 1945 in Borno. In 1960, got a government scholarship to complete his Ordinary Levels and Advanced Levels at Bishop’s Stortford College, United Kingdom. In 1965, he received his bachelor’s degree in international relations from the University of Sussex.
He became a permanent secretary in the presidency of General Ibrahim Babangida.
Kingibe also served from October 2002 to September 2006 as the Special Envoy of the African Union to Sudan and subsequently Special Representative of the Chairperson of the African Union Commission and head of the African Union Mission in Sudan. In June 2007, he was appointed Secretary to the Government of the Federation.
Kingibe, running mate to late MKO Abiola during the annulled 1993 presidential ballot, has been reportedly holding forte since Kyari was indisposed. “Prior to that time, he had been a massive power behind the throne. He is vast in security matters and very, very political savvy. The Kanuri power block in this administration is also very impressive. I tip him to get it,” one source said last night.
Hameed Ali

The Comptroller General of the Nigerian Customs Service, Col. Hameed Ali, was born in Dass, Bauchi State on January 15, 1955.
Ali was commissioned in 1977 after he received his training at the Nigerian Defence Academy in Kaduna. He attended Sam Houston State University, Texas from 1984 to 1988 and holds bachelor’s and master’s degrees in Criminology, and an educational certificate from the Nigeria Defence Academy.
After retirement, he became secretary of the apex northern sociopolitical group, Arewa Consultative Forum.
Ali is an All Progressives Congress member. He supported Buhari’s presidential bids from 2003 to 2019. On 27 August, 2015, Buhari appointed him the CG of Customs.
The source said: “Maybe. He is considered to be straightforward and a no-nonsense person. His military background also stands him in good stead. He is from North-West. I doubt if the powerful North-East bloc will give in, especially since Kyari was from there. They may put up a case that a replacement for him should also come from the North-East.”

As for Marwa, the source described him as “a very long shot”, explaining: “Although he is also from the North-East, the only strong thing going for him is that he is Hajia Aisha Buhari’s candidate. I’m not too sure Hajia is strong enough to pull it through, or that the cabal will allow her wield that much power. It would drastically change the whole power calculus in the country if Marwa gets the job. But I think he might be the best for the country and the redemption of the tattered image of PMB.”
Muhammad Bello

The Minister of the Federal Capital Territory, Alhaji Muhammad Bello, who hails from Adamawa State, was born on January 8, 1959.
An alumnus of the prestigious Barewa College, Zaria, the minister is a graduate of Ahmadu Bello University, Zaria, where he obtained a BSc. in Management with bias for Banking and Finance in 1980, as well as MBA in the same field.
Bello was in charge of credit and marketing at the ICON Merchant Bank Plc and later a director at Habib Bank Plc and several other firms.
Adamu Adamu

The Minister of Education, Adamu Adamu is an accountant, writer, former journalist and public analyst.
Adamu Adamu was appointed as Minister of Education by President Muhammadu Buhari in 2015. He studied Accountancy at the Ahmadu Bello University.
Upon receiving his university degree, Adamu was hired as an accountant at CCP, and then continued to work at the CNL in Bauchi State, before joining the local government in the same position.
Adamu began a career as a writer and a public analyst, later emerging a newspaper editor in 1984 and becoming a columnist for Daily Trust. His articles were also syndicated in several news outlets, including the London-based Crescent International.
Isa Pantami

The Minister of Communications and Digital Economy, Dr Isa Ali Pantami, hails from Pantami District of Gombe State. Pantami lectured at the Abubakar Tafawa Balewa University in Information Technology before joining the Islamic University of Madinah as Head of Technical Writing in 2014.
In 2016, he was appointed as the Director General/CEO of the National Information Technology Development Agency.
He attended Federal University of Technology, Bauchi (popularly known as Abubakar Tafawa Balewa University) where he obtained a BTech in Computer Science in 2003. He also obtained an MSc in Computer Science in 2009 and an MBA in Technology Management 2011 session from the same University.
Pantami also holds a PhD in Computer Information Systems and Postgraduate Certificate in Research Methods from Robert Gordon University, Aberdeen, United Kingdom.
Kashim Shetimma