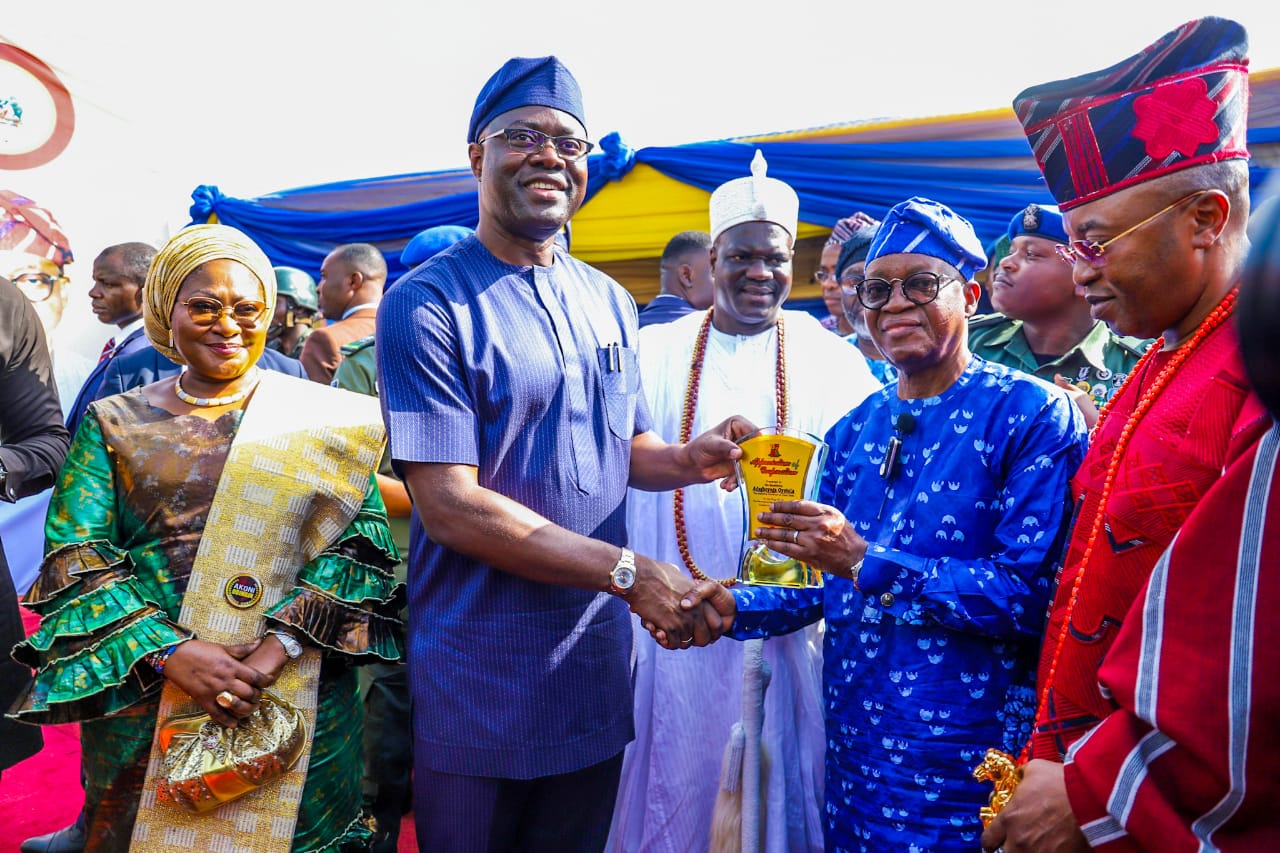 Oyo State Governor, ‘Seyi Makinde, has declared that he and his Osun State counterpart, Governor Gboyega Oyetola, have started a revolution of ideas that has been helping to promote collaboration, integration and good governance in the South-West geopolitical zone.

He maintained that the two governors have been able to lead a revolution and collaboration that put the people of the two states first, relegated politics and partisanship to the background, while delivering dividends of good governance to the people.

Governor Makinde, who stated this at Ido Osun, Osun State, on Thursday, during the flag-off of the reconstruction and selective expansion of the 91 kilometres Osogbo (Dele Yes Sir Roundabout)-Iwo-Ibadan-Iwo Road Interchange, by the two governors, said his government chose to explore the opportunities of collaboration at the outset of the administration.

The project, which is to be completed in 18 months, was awarded to Messrs Peculiar Ultimate Concerns.

A statement by the Chief Press Secretary to the governor, Mr. Taiwo Adisa, quoted Makinde as saying that the fruits of the state’s collaboration with sister-states included the establishment of the Amotekun Corps, the sole ownership of the Ladoke Akintola University of Technology and now the reconstruction of the Ibadan-Iwo-Osogbo Road.

He commended the Osun State governor, Oyetola, for acceding to Oyo State’s request to solely own LAUTECH, which according to him, helped him [Makinde] to fulfill one of his campaign promises to the people of Oyo State.

Governor Makinde stated that a similar collaboration with the governor of Ogun State, Mr. Dapo Abiodun, in the area of security, has helped to drastically reduce incidents of kidnapping between the Ogun-Oyo axis.

Describing the flag-off of the 91-kilometre road as historic, Makinde said that the two states would be linked with the road project, which will allow ease of travel and increase in commerce and trades between the sister-states.

He said: “Today, I am joining His Excellency Gboyega Oyetola, and together we are again making history. This time, as jointly agreed, we will be linking our dear states with a road project. And so, another milestone of collaboration is reached with this flagging off of the asphaltic reconstruction, rehabilitation and expansion of the Osogbo-Ibadan-Iwo Road.

“I mentioned earlier that in Oyo State, we are leading a revolution. We are saying politics should be left to those few months when INEC says we should begin campaigning either for elections or re-election.

“Even then, we must practise politics of justice and fairness without bitterness and rancour.

“The revolution we are leading in Oyo State is a revolution of thought. Again, we are saying, governance must always trump politics. When we make decisions, we must always put the interests of our people first.

“Of course, you already know that my brother, the Governor of Osun State is from the All Progressives Congress (APC), while I belong to the Peoples Democratic Party (PDP). Despite this difference, we have accomplished things that people from the same party were unable to do. This is the revolution we are talking about.

“This latest collaboration also comes with dividends of good governance. When this road is completed, our people will be able to travel with more ease between the states, thereby enhancing trade and commerce.

And as we say in Oyo State, where roads go, development follows. So, in the next year or so, we will begin to see the development in real terms.”

Governor Makinde explained that the revolution of thought being led by Oyo State, has brought a new order where the people have been benefiting from the collaborative efforts of his administration with sister-states in the South-West.

He said: “I know, when people hear the word revolution, they often think of bloody wars that lead to change in a political order. Well, don’t be alarmed, I am not here to preach violence. Rather, I am here to talk about a different kind of revolution that is happening in Oyo State.

“In the past, every state used to mind their own business and operate in their own little corners. “But with this new way of doing things, we are pursuing collaborations with our sister states.

“When we just came in, we started on this path with one of the biggest collaborations in the history of South West states. We all came together and decided on creating the Western Nigeria Security Network code named Amotekun. And in 2020, we operationalised the Oyo-Amotekun. As I have said on many occasions, our people cannot imagine life without Amotekun.

“Also, just about two years ago, we celebrated another win that resulted from this revolution. My brother, our host for this flag-off, His Excellency Gboyega Oyetola, the Executive Governor of Osun State, was a big part of that history. He benevolently acceded to granting us sole ownership of the Ladoke Akintola University of Technology (LAUTECH), which made it possible for me to fulfill a campaign promise to the good people of Oyo State.

“Let me once again use this opportunity to say thank you, Egbon.”

He maintained that the project is a dream come true, as it is part of his government’s effort “to provide quality roads on an equitable basis and entrench sustainable economic development.”

Oyetola said: “I salute the political sagacity and astuteness of the Governor of Oyo State, Engr. Seyi Makinde, who rose above all political differences and considerations to collaborate with us to not only ensure that this laudable project comes to fruition, but to further entrench regional integration.

“When the project was initially conceptualised, our plan was to fix the Osogbo-Iwo section that belongs to Osun. We, however, on a second thought observed that the Oyo State section too was in a very bad shape and capable of defeating the objective of our road Reconstruction/Rehabilitation effort.

“Consequently, we reached out to Governor Makinde and, without hesitation, he embarked on this invaluable voyage with us.

“I must, therefore, reiterate that, but for the tenacity of my counterpart from Oyo State and his understanding, this all-important collaborative project would not have become a reality.

“For me, I believe this kind of collaboration will further promote regional integration in the South-West.

“I, therefore, on behalf of the Government and good people of Osun, once more thank my brother-Governor for this rare collaborative effort.”

In their separate remarks, the Oyo State’s Commissioner for Public Works, Infrastructure and Transport, Prof. Kehinde Sangodoyin and his Osun counterpart, Engr. Oluremi Omowaiye, said the reconstruction of the roads will promote the inter-trade relationships between the two states.

The flag-off was attended by government functionaries of Osun and Oyo states, including the Deputy Governor of Oyo State, Barr. Abdulroheem Adebayo Lawal; wife of the Osun State governor, Alhaja Kafayat Oyetola; Speaker of the Oyo State House of Assembly, Rt. Hon. Adebo Ogundoyin; a representative of the Speaker of the Osun State House of Assembly; Hon. Justice Iyabo Yerima, who represented the Chief Judge of Oyo State, Justice Muntar Abimbola and members of the Executive Council of Oyo and Osun states.

Traditional rulers, including the Olubadan of Ibadanland, who was represented by the Osi Olubadan, High Chief Eddy Oyewole; Oluwo of Iwo, Oba Abulrasheed Akanbi; Timi of Ede, Oba Munirudeen Lawal; Olugbon of Orile-Igbon, Oba Francis Olusola Alao and the Okere of Saki, Oba Khalid Olabisi, among others, were also in attendance.