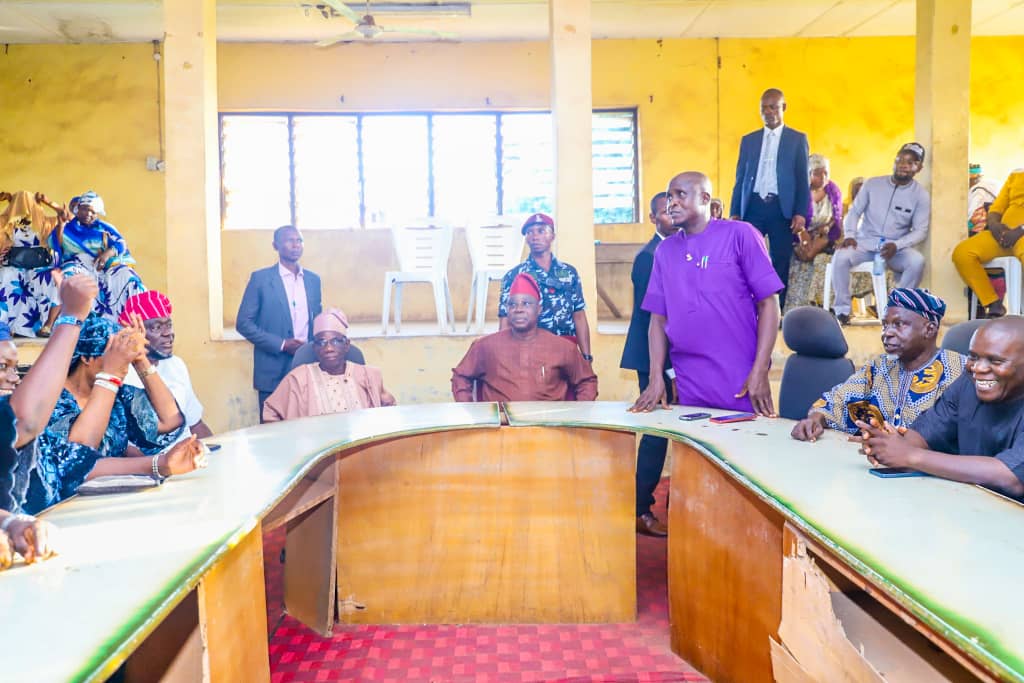 The deputy governor of Oyo State, Barrister Adebayo Abdul-raheem Lawal, has held a strategic meeting with stakeholders and members of the Peoples Democratic Party of Saki-West, Saki-East, and Atisbo Federal constituency ahead of the upcoming 2023 general election in 2023, MOUTHPIECE NGR reports.

He stated that the election is a very serious task that requires everyone to work as a team to succeed.

According to Lawal, who made the statement on Saturday at Saki-West Local Government after leaving the palace of Okere of Saki where he requested support for all the party’s candidates, noted that the party required a planned journey to succeed in the upcoming elections.

He emphasized that there would inevitably be little misunderstandings and animosity because of personal interests in politics, but that with patience, problems could be solved and more could be accomplished.

He said that the party was divided when he came on board, with many groups holding meetings in different areas, particularly in Saki West, but that with unity, we can always succeed, praying that the party win the upcoming election by a wide margin.

“I’m here to meet with PDP stakeholders and PDP supporters, as well as to honor the Commissioner for Agriculture and participate in the 120th anniversary celebrations of First Baptist Church, Saki in Adagba.”

“As a deputy governor, I don’t have the power to influence anything but to agree all together for the success of the party.”

Lawal emphasized that there must not be conflict among members of the federal constituency, that he has come here on purpose to settle all disputes, and that everyone must take the work of election very seriously.

“I have voted severally and lost election. It’s not an easy process and I pray that none of you will experience what I went through in politics. Although, it’s not a sin to lose but it is always so painful.”

Speaking at the strategic meeting, Hon. Adekunle Rafiu, a former minority leader of the Oyo state House of Assembly from Saki West, said that the PDP is now united and that meetings is now holding in one place. He said that other matters would be settled amicably after the election and urged the government to take action in some areas that required urgent attention.

Another speaker remarked, “We suffered greatly because Makinde led us from the SDP to the PDP and we were not given any sense of belonging in terms of appointment.

“We wouldn’t have shown up like this if you had not been the one that called us here. However, we came to the meeting because of your good disposition and we believe you would resolve all issues amicably”

A female speaker emphasized in her speech that the party’s leadership should show great concern for the women, noting that many of the party’s members are hungry but that they may be shown concern before the start of the general election.

In order to avoid being made fun of by members of the opposition party, she gave the government the duty of focusing on stomach infrastructure and areas that could help the party’s members.

“We’re happy you’re from Oke-Ogun, and we know you’ll represent us well,” another speaker said.

“Elections are for serious-minded people, and politics is not only about being a technocrat. We therefore ask you to contact our governor and take the appropriate action.”

On his part, a stakeholder who claimed that the deputy governor is his senior in secondary school told the gathering that he’s honest, straightforward and won’t forsake anyone.

He pleaded with Governor Seyi Makinde to grant Local Government Council Chairman autonomy to act and perform without tightly controlling them so they could care for the residents of their local government and party members.

However, another party leader expressed dissatisfaction, urging the deputy governor to address all of the problems, that there are currently two meetings taking place in ward 8 of Ago-are and that numerous complaints have been made to the party leadership.

The deputy governor, Bayo Lawal, responded by expressing satisfaction with the way everyone had expressed their thoughts and promising a resolution. He also urged Alhaji Moseo to address the root causes of all crises in Saki-west.

“But when a student and hotelier were abducted in Ogbomoso in the Surulere local government, we had to call a meeting with the DPO on a security issue in which the DPO claimed no one gave him security money, and we tried to investigate the matters until we decided to stop the money because we were extremely hurt with it.”

“I am not saying that it is enough, but at least if the money is distributed from the token, it will also get across to the people and party members.”

“The situation was worse to the point where councilors began to oppose chairmen by having them removed. However, we have established a different plan and template to address your issue in a few days.”

“Secondly, as we near the conclusion of this administration, we have developed a template that will take care of everyone, including OYSROMA, and it will also ensure that deplorable roads are fixed as someone had previously stated.”

“While announcing that the funding for the start of the road project would likely drop on Monday, he pleaded with everyone who is still waiting for something or who is still irate to exercise patience and use him as an example.

He promised them that he would discuss several of their concerns with Governor Seyi Makinde and that the governor would take care of their needs.

Lawal also updated the crowd on his actions regarding Hon. Adamawa’s House of Representatives matters by making an appeal to the two individuals who had sued him during the party primary election, saying that Onjo had dropped his case except his brother Omirinde whom he had invited severally to drop his own case as well.

“Despite the fact that the only option we have is for INEC to declare that we have no candidates, I will never allow that to happen. As a result, I’m pleading with everyone to urge him to withdraw his own case as well.”

Finally, he said, “I am urging everyone in the Ifedapo federal constituency to promote unity among all before we kick off our campaign, which has also been moved to September 3rd of November.