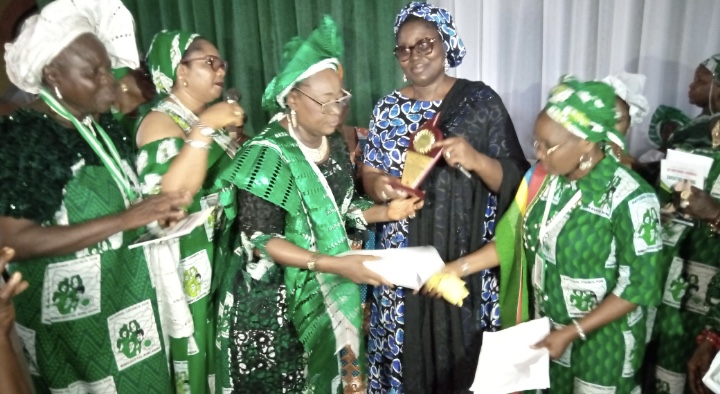 Nigeria’s National Council of Women’s Society is the main organization responsible for advancing the status of all Nigerian women.

The National President of the NCWS, Hajia Lami Adamu, commended Oladeji for being a deserving ambassador and advocate for women while presenting the award to the lawmaker in Ibadan on September 14. Oladeji is the Chairman of the House Committee on Women Affairs and Social Inclusion.

According to Hajia Adamu, Hon. Oladeji has demonstrated to the world through her achievements as a politician and legislator that women in society can build nations and should be given more opportunities to serve, particularly in elective offices.

The sole female member of the 9th Oyo Assembly, Hon. Oladeji, expressed her gratitude to the National Council for recognizing her as deserving of receiving the prestigious awards in her brief remarks.

She affirmed that she would be inspired to do more and not give up on promoting the status of women in society at all levels as a result of the gesture.

Hon. Oladeji claimed that although being a legislator has not always been easy, she listed some of her accomplishments in terms of sponsored bills and motions, stating that experience, resilience, determination, and commitment have kept her going.

However, the two-term lawmaker urged women to participate more actively in politics so they could have a greater impact on society. She emphasized that if women continued to shun politics, men would continue to dominate the political scene.

“I want to sincerely thank the National Council for even considering me deserving of this honor; I am deeply appreciative and can guarantee you that this will only inspire me to accomplish more.

“I have to be honest with you; it hasn’t been easy being the sole female lawmaker in a chamber of 32. I’m the sole female state assembly member, and while there are 32 members, 31 of them are men.

“I also want to reassure everyone that I will continue to work to advance the status of women and womanhood in our society. For this reason, I personally supported a number of bills and motions that have since been passed into state law.”

Hon. Oladeji urged women to constantly make an effort to support other women who are trying to have positive effects on society at any level, especially in politics, stressing that the rate at which women enter politics and governance is dependent on how well women support one another.

She also urged women to increase their collective voting power and campaign for Permanent Voters Cards (PVC) collection, claiming that this is the only democratic way to choose excellent, sincere leaders.

In their separate remarks, other female attendees at the event asked legislators and the government to guarantee the execution of a 35 percent slot for women in both appointed and electoral offices in their own speeches.

They argued that encouraging inclusive participation to the fullest extent is only possible when women are guaranteed equality in all elected and appointed positions at all levels of government.

Additionally, they committed to use their numerical advantage to bring about positive change by 2023 because things would no longer be business as usual.

The Oyo state executive members of the Council and other invited guests are present at the event as well.

Highlights of the event included the official commissioning of the newly built NCWS state and the award presentation to Hon. Oladeji and other recipients.