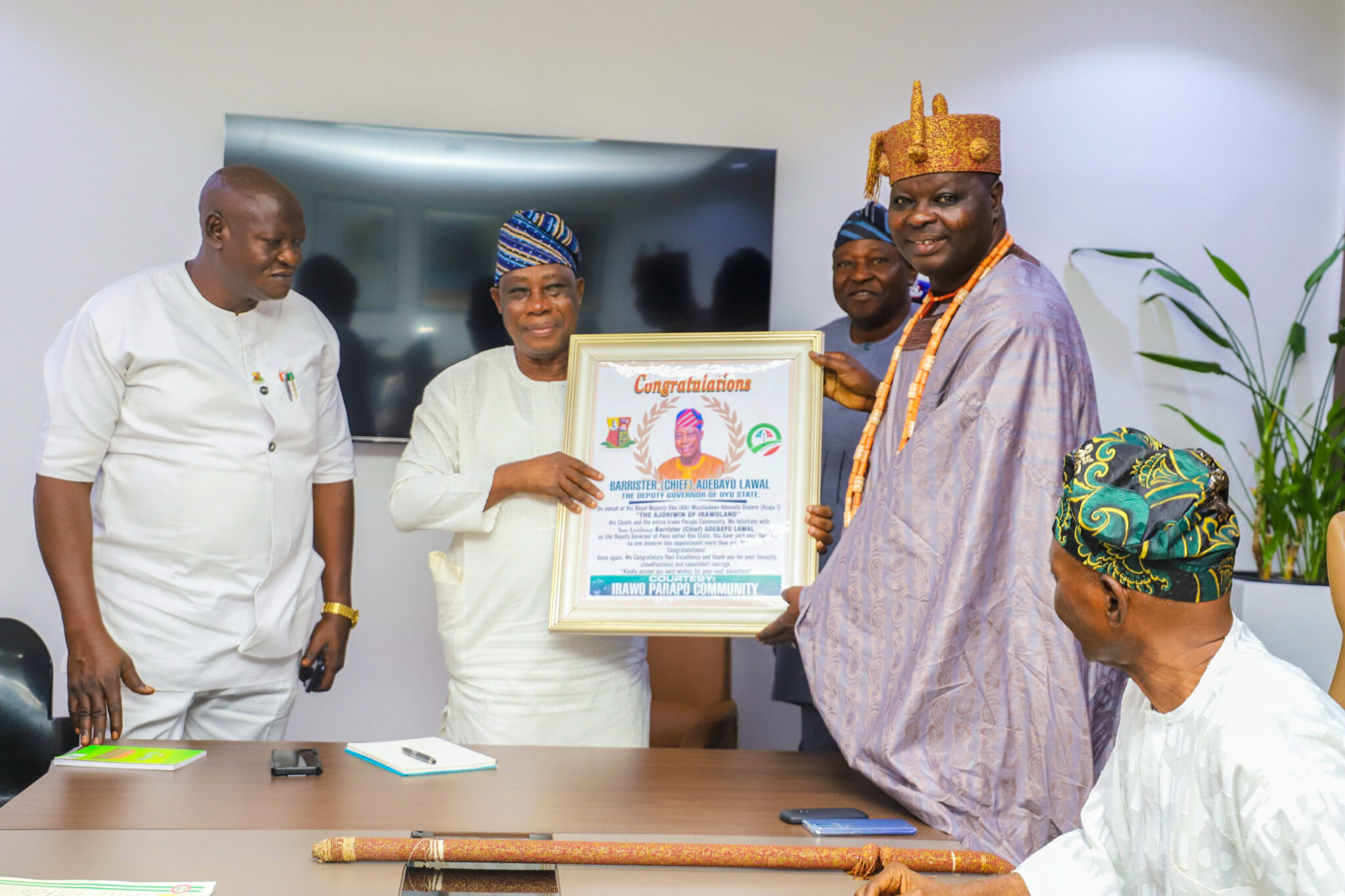 In order to show their appreciation for the enormous strides and steps taken so far by Governor Seyi Makinde in bringing Oyo state’s glory back to that of a real pacesetter state, the entire Irawo Parapo community has vowed to cast bloc votes for the People’s Democratic Party in the general elections of 2023.

The community made the commitment on Wednesday during a courtesy visit to the office of the acting governor of Oyo state, Barrister Adebayo Abdul-raheem Lawal. The community was led by its traditional ruler, Oba Muslihudeen Ademola Olalere (Asaju 1), Ajoriwin of Irawolnad.

Oba Olalere praised Makinde for his political tenacity in the face of fierce opposition, given high and unprecedented priority to education and workers welfare and wisdom in setting up Park Management Committee (PMC) to replace the proscribed NURTW in a peaceful manner.

He said the governor also took a swift action in combating the unfortunate global pandemic (Covid 19) as well as the rehabilitation of Health Centers to mention just a few.

He said that the reason I returned again to this place was because I had seen hope that you would speak for our interests.

“After returning home that day, I met with community stakeholders to discuss the kind of deputy governor we now have in Oyo state who would represent our interest.”

“In Oke-Ogun, you are the first acting governor we have had. We sincerely appreciate your contributions in Oyo state, and as promised, we will deliver a bloc vote for governor Seyi Makinde.”

“We ought to have brought more people here to show our sincere gratitude and to let you know how pleased we are with your appointment.”

“Please assist us in getting our message across to Governor Seyi Makinde when he returns with our demands. We are very appreciative”, —he said.

An elderly man in the entourage expressed his appreciation to the acting Governor for securing job for his son while serving as Commissioner for Justice and attorney General of Oyo state. He prayed God to continue to be with him.

He equally invited the deputy governor to pick a date for the Irawo day ceremony as he is expected as the father of the occasion.

While expressing his appreciation, the acting governor, Bayo Lawal promised that he will do whatever is within his capacity to contribute the development of Irawo community.

“Like Demola Agbarapo indicated, there has never been a transmission of power since the creation of western region. And we are very appreciative to God for this opportunity in Oke-Ogun. I will have to act morally and appropriately given my age.”

“The Southwest can be sustained with the abundance of natural resources in Oke-Ogun. There is a mineral that is found solely in Oke-Ogun in Nigeria and Brazil. The state of Oyo is anticipating the development of Oke Ogun.

“To me, the position of deputy governor is not a spare tyre, contrary to what some people falsely claim. As such, whatever you need from the position that will benefit our children should be asked.”

“So, let’s endeavor to repay His Excellency, Seyi Makinde back with bloc votes in 2023 general election.”