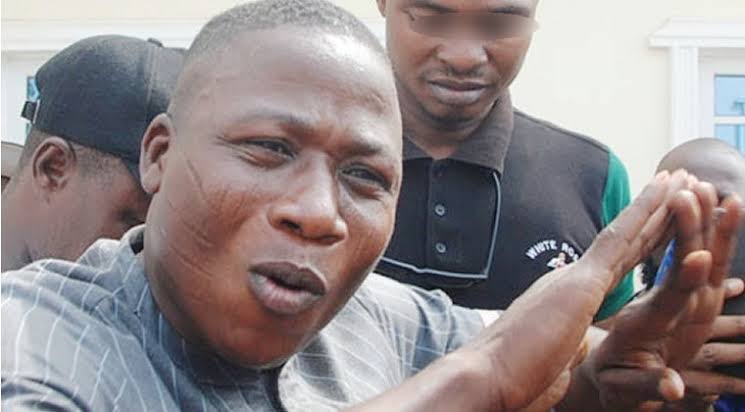 In the security circle, a person whose name is on the stop-list is denied all constitutional rights and privileges a citizen is entitled to.

The government said Igboho had been placed on stop-list in order to facilitate his arrest and directed the security agencies to apprehend him anywhere he is found.

The Federal Government’s directive against Igboho was contained in a letter by the Nigeria Immigration Service dated July 9, 2021, addressed to the Director General, Department of State Services, the Inspector General of Police and the DG, National Intelligence Agency.

The activist, a spearhead of the separatist agitation for the Yoruba Nation, had been declared wanted by the Department of State Services on allegations of stockpiling arms to destabilise the country, which he has since denied, but his whereabouts remain unknown.

The whereabouts of Igboho, a lead figure in the separatist agitation for the Yoruba Nation, has been unknown since he narrowly escaped arrest during the July 1 midnight raid by the secret police, ahead of a major rally in support of the call for Yoruba Nation in Lagos.

Following the bloody raid on Igboho’s Sooka residence, the DSS arrested and detained 13 of Igboho’s associates, adding that during a “gun duel,” it had killed two of Igboho’s supporters later identified as Adogan and Alfa.

The petition was filed against the President Muhammadu Buhari ; the Attorney General of the Federation and Minister of Justice, Abubakar Malami, SAN; former Chief of Army Staff, Tukur Buratai; and former Inspectors General of Police, Ibrahim Idris and Muhammed Adamu.

They accused the Nigerian leaders and security chiefs of genocide and crimes against humanity against the Yoruba people of Ekiti, Oyo, Osun, Ondo, Ogun, Okun Land in Kogi, and Kwara states.

The letter titled ‘Stop-listing of person: Adeyemo Sunday Adeniyi (aka Sunday Igboho), male, Nigerian, passport number A11613637, date of birth 10/10/1972’ was copied to all zonal controllers and control posts nationwide.

It read, “I am directed to request that you kindly place the above-named person on stop-list.

Credible intelligence revealed that Adeyemo is making efforts to obtain a police extract and/or court affidavit to enable him acquire a new Nigerian passport, apparently to facilitate his escape out of the country.

“In addition, he should be arrested wherever and whenever sighted and referred to the Director-General, Department of State Services vide letter no: S.605/A/246 dated 05 July 2021.”

The NIS spokesman, Amos Okpu, however, said he was not aware of the letter. He added that he had no update on the manhunt for Igboho.

He said, “I’m not aware of the letter. Has Ighoho been declared wanted? Well, I don’t have any information on him.”

The DSS spokesman, Peter Afunanya, has yet to respond to inquiries on the issue as at press time.

Following the raid on Igboho’s Sooka residence on July 1, Afunaya told journalists in Abuja that the raid was carried out based on an intelligence report that Igboho had stockpiled arms in his residence.

He explained that Igboho and his group, in the guise of the campaign for self-determination, had become well-armed and determined to undermine public order.

Others were three charm jackets/traditional body armour, two laptops, one Toshiba and one Compaq laptop, Igboho’s passport and those of his aides.

Afunaya claimed that five of the AK-47 rifles recovered from Igboho’s residence were snatched from the Nigeria Customs and Immigration personnel at Idi-Iroko, Ogun State.

One of our correspondents had reported moves by the secret police to track down Igboho’s financiers and supporters.

Reports said the intelligence agencies had geo-located Igboho’s hiding place but they could not storm the place for security reasons. However, Saturday PUNCH could not confirm this.

Residents of the town told one of our correspondents that the gunmen, who allegedly dressed in Customs uniform, invaded the town around 7 pm, shot and killed an unspecified number of people they met at the entrance of the town before fleeing.

The eyewitnesses said they did not know the number of persons killed by the gunmen, but that one of the sources had claimed that one person was shot dead by the rampaging hoodlums.

The gunmen were said to have loaded themselves in four vehicles, two of which were a Toyota Hilux and Sienna.

Some of the sources claimed that hunters and vigilantes in the town, when they heard the gunshots, came out in hot pursuit of the hoodlums. The fleeing hoodlums were said to have escaped through Ayete.

The Secretary of Farmers Union, Mr Taiwo Adeagbo, who is popularly known as Akowe Agbe, also alleged that the attackers wore military uniforms.

Adeagbo said, “The attackers wore military uniforms. They opened fire on those they met when they entered the town. They shot for some minutes and before the hunters could get to where they were, they had fled.”

A resident of Ayete, who identified himself as Kamaru, also told Saturday PUNCH that the fleeing hoodlums met a motorcycle spare parts dealer on the road at Ayete and shot him to death.

He said, “The gunmen invaded Igangan again this evening (Friday) and killed some persons there.

But we don’t know the actual number of those killed yet. They entered Ibarapa through Igangan, shot and killed some persons they met on the road. They wore Customs uniforms, so most people would not suspect they were criminals.

“They also killed somebody here in Ayete before they escaped. But our people are pursuing them and they are likely to catch up with them. I heard that they did not go straight but veered into a path but that road is not smooth.

“We later heard that they abandoned one of their vehicles and fled on foot into the forest. But we are living in fear now because we don’t know when they will strike again.”

The Coordinator of the Oodua People’s Congress in Oyo State, Mr Rotimi Olumo, also said his members in Ibarapa told him that the attackers wore Customs uniforms and killed one person in Igangan, one person in Ayete and a member of the Amotekun Corps at Igboora.

He said, “I issued a release about five days ago that the government should beef up security in the area. We heard that they would attack them before Eid el Kabir or on Sallah Day. Now, they have killed one person in Igangan, they killed another one in Ayete and killed another one at Igboora.

“I am receiving a briefing from our members there from time to time. The last one they shot dead at Igboora was said to be an Amotekun officer.”

The Commandant of the Amotekun in Oyo State, Col. Olayinka Olayanju (retd), could not be reached to comment on the attack. Repeated calls to his number indicated that it was engaged.

The Police Public Relations Officer in the state, Mr Adewale Osifeso, when contacted, told one of our correspondents that he would confirm it and return the call. But he had yet to do so as of the time of filing this report.

Recall that suspected herdsmen had in June invaded Igangan where they set vehicles and houses ablaze, including the palace of the Asigangan of Igangan.