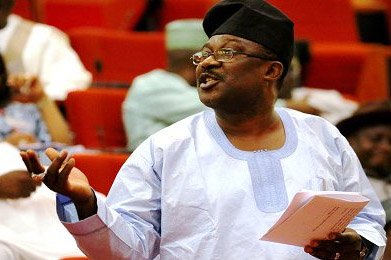 Smart Adeyemi, senator representing Kogi west, says he will sponsor bills for the enactment of the Mosaic law as a measure to curb corruption in the country.

Speaking at a retreat for the senate press corps in Lokoja, Kogi state, on Saturday, Adeyemi said public officers will not steal if their hands are cut off.

The Mosaic law is ascribed to Moses in the old testament of the Bible. He wrote the 12 testaments which guided Israel at the time.

The senator said the law will deter people from stealing.

“Like I said on the floor of the senate; if we want this country to be great, we must look at some acts of parliament; moreso the ones that have to do with anti-graft agencies. I want my children to be happier than I am in Nigeria, and to do that there must be enough money to meet the needs and aspirations of the people,” he said.

“What am I talking about? Let us confront corruption. Very soon I’m coming back to the chamber to bring bills on ICPC and EFCC. I want us to introduce Mosaic law, what you call Sharia law. By the time you cut the hands of 10, 20 people in this country, nobody will want to steal again.

“By the time you say two, three people should face serious punishment; if you say that is too harsh let us have mechanised agriculture of about 200, 250 acres, once you are involved in corruption, you will spend your life farming for us.”