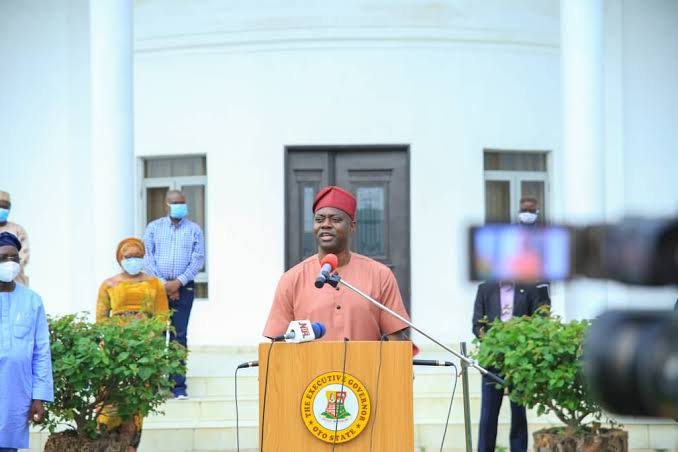 A popular activist, Omo Iya Kunmuni has taken to social media to express his dissatisfaction about the handling of the novel Coronavirus case in Oyo state by Governor Seyi Makinde.

Kumuni, who opened “Can of worms” in an open letter addressed to the Governor, in which a copy was made available to Mouthpiece NGR on Saturday, lambasted Engineer Seyi Makinde for exposing people to danger with the step adopted to contain the pandemic.

He wondered what inspires so much confidence in the governor lately that has made him to make some sensitive moves, considering the escalating number of cases.

The letter reads, “Yesterday, the Governor of Oyo State, Engr. Seyi Makinde via his twitter handle announced the results of some pending COVID-19 confirmation tests.”

– 1 UCH Doctor who CAME BACK from KANO

– A worker of the State Security Service

– 2 Residents of Ogbomoso (Its in Ogbomoso already)

– Another KANO case being managed in Oyo State.

That brings us to a whole 11 new positive cases.

“Just yesterday, we had onboard a guest on OIKTv Socio-Political analysis segment and we discussed on the porosity of our entry points and the need for the State government to scale up efforts to enforce strict compliances at the borders so as not to have its efforts at combating the pandemic jeopardized.”

“I recounted the fears of a Health Care Worker who was aware of how some immigrants gained entry into the State via one of the borders illegally without being tested. He alerted his superior officer who instructed that they bring the illegal immigrants into isolation. Unfortunately for us, he combed the entire town with the police and these people, over 20 of them, were no where to be found till date and their status unknown!”

“Now, lets look at the trend of the new results. We can say this categorically that this is nothing but a reflection of our porous borders.”

“Its been weeks since we started observing partial lockdown in the state but we need to start asking ourselves what this has achieved so far.”

“If people are still coming into the state from neighboring states, especially, states on RED ALERT like Kano. If we still have illegal immigrants that are likely carriers gaining entry into the State, one would wonder what motive the partial lockdown was set to achieve initially. The cases from Ogbomosho may likely be because of town’s proximity to the North.”

Yesterday, I was in Ibadan for the first time since the pandemic broke out and to my dismay, businesses were going on as usual. Public transports were overloading passengers without caution and shops and business ventures were still opened as at past 7pm when the curfew should have started.

At this point, I am compelled to ask this question; IS THE OYO STATE GOVERNMENT TAKING THIS FIGHT SERIOUS AT ALL?

One would wonder what inspires so much confidence in the governor lately that has made him to make some sensitive moves, considering the escalating number of cases.

1. He ordered civil servants back to work on the 27th, a step the FG is also emulating.

2. Yesterday, I heard some news of schools resuming in July, 2020 and I was surprised.

Is Governor Seyi Makinde seeing what we are not seeing?

Personally, I expected more firm decisions from the state government but if you want to deceive yourself, you can always believe all is well. I am not going to deceive myself.

Let me also ask, where are the palliatives the governor promised weeks ago?

The 1million nose covers project will take how many years to get produced? Is the virus waiting for us?

How many people have been tested so far and what other efforts are we taking to bring this to the community level?

Where are the isolation centres he ‘started’ across the state despite the fact that he left out a zone, Oyo town, for a damn flimsy excuse?

These and some others are questions begging for answers.

Dear fellow citizens, I can say it emphatically that I am not impressed so far with the governor’s/government’s efforts/attitude. And if you dont believe, I believe it that we are sitting on a keg of powder. Ask those healthcare workers at the frontline.