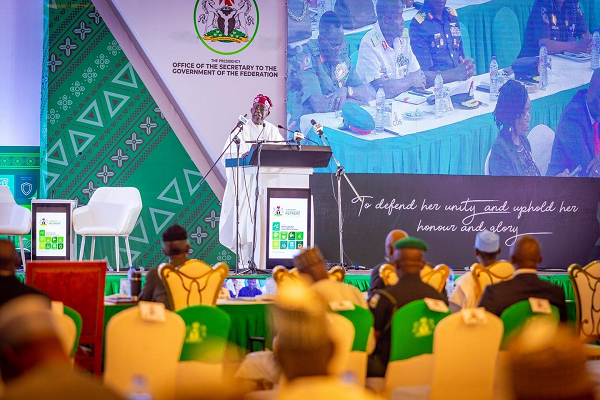 The Presidential candidate of the All Progressives Congress (APC), Asiwaju Bola Tinubu, has pledged to build on the legacies of President Muhammadu Buhari, if elected as President in 2023.

Tinubu made the pledge when he addressed participants of the Ministerial Performance Review Retreat on Tuesday in Abuja.

The APC presidential candidate, who made an appearance at the retreat on the invitation of the organisers, commended Buhari for doing so well for Nigeria since he assumed office in 2015.

He said: ”Mr President and other members of the administration, may I state the following: ”If elected, I will give due honour to your efforts and your legacy.”

I will work in the spirit of further unity, a national purpose that informed the creation of our party that characterized the work of your government.”

Most importantly, the way and means of a Tinubu government will be devoted to further projects and to prosper the Nigerian people because our guiding principle will be to provide the best of progressive governance and reform our beloved land.”

Consider these three promises to be a positive outgrowth of your nine point agenda.”

Tinubu, who praised the efforts of the Buhari administration in routing out insurgents, expressed optimism that terrorism would be defeated.

“Upon entering office, you faced a situation where deadly terrorists were hoisting flags on our national territory proclaiming an illegal state within our legitimate state.”

Because of your collective work, they no longer do so, they dare not. Their boast of conquest is no longer heard. You have put us on the road to defeating this menace.”

By the grace of Almighty God, we shall persist until terrorists and those like them are utterly removed from the face of our nation.”

The progress you made, increasing farm productivity while improving the condition of the average farmer, was a border policy intervention helping the nation overcome the global supply chain disruptions that threaten our food security.”

In spite of financial headwinds, you embarked on an unparalleled expansion of the national infrastructure. Work in the power sector may be slow but it will show some dividends amidst the increased investors in this area,” he added.

According to him, history has a way of clearing the myths, so that things can be said clearly and objectively.

He said: ”Any objective assessment of your time and the national contribution you all have made will be a positive and grateful one.”

This administration inherited a national condition stitched in difficulty unlike any other. Predecessor government ignored or lacked the will to tackle serious problems ranging from insecurity to corruption.”

As if that was not enough, you confronted a series of events unprecedentedly compounded by the complexity and novelist of COVID that attacked global health and the global economy.

“Throughout most of your tenure, oil prices waned and edged and consequently, so did our revenue.”

Tinubu added that the Russia-Ukrainian war and all the conflicts coupled with severe weather events in many nations further depleted economic production and undermined the international supply chain of regular items especially food.”

You did more than expected and withstood these adverse storms, despite it all, you made historic progress,” he said. (NAN)