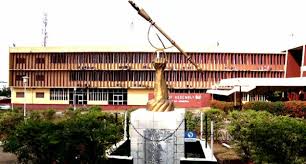 On Thursday, there was drama at the Ogun State House of Assembly again as members abruptly left the chamber following the sudden disappearance of the Assembly Mace.

The Mace, which is the staff of authority of the state’s legislative arm, was allegedly stolen to prevent the lawmakers from achieving their aims of impeaching the embattled Speaker, Olakunle Oluomo when the House was scheduled to hold its plenary session at the Assembly complex, yesterday.

MOUTHPIECE NGR gathered that the lawmakers’ sitting was the third time in a row that the Assembly has skipped a meeting since the Speaker was taken into custody last Thursday.

The Speaker is currently being tried at a Federal High Court in Lagos on charges of corruption, forgery, and financial impropriety. He is being investigated by the Economic and Financial Crimes Commission, or EFCC.

This will be the second time when the Mace of the Ogun State Assembly under the leadership of Oluomo will be missing, having recorded the first one on December, 2020, but was later recovered by the Lagos Police Command at Abule Ado Area in Lagos State.

The Assembly’s Deputy Speaker, Mr. Akeem Balogun, who is constitutionally charged with overseeing the Assembly’s business, was not allowed to preside over the day’s proceedings, which included the Speaker’s impeachment, according to a source close to the Assembly who asked to remain anonymous.

However, several politicians who were reported to be Oluomo’s allies allegedly plotted to have the drill cancelled and relocated the Mace away.