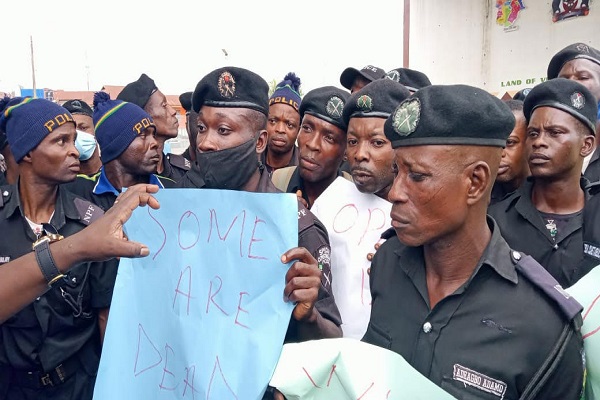 No fewer than 480 police constabularies yesterday thronged  major streets and junctions in Osogbo, the Osun State capital, to protest against the the non-payment of their 18 months’ salaries.

The constabularies, recruited to provide intelligence, among other functions, were inaugurated in May 2021 at police headquarters in Osogbo after their training a month before.
The protesting policemen, in their uniforms, converged at the Old-Garage area, marched  through Oke-Fia, Alekuwodo before storming the Ola-Iya Flyover to press home their demands.

They carried placards with several inscriptions, which read; ‘Pay our salary now’,  ‘Okada riders are sleeping with our wives’, ‘Pay us our 18-months salary’,  ‘pay us’,  ‘Our Stipends And Allowances’,  ‘18 months without kobo’, among others.
Speaking with newsmen, one of the leaders of the protesting policemen, Constable Tijani Adewale, said despite the non-payment of salaries, they have been committed, stressing that amid their predicament, three constables  have died in the course of discharging their duties.

He lamented that commercial tricyclists and motorcyclists have snatched their wives due to their inability to take care of them and their children.

Adewale said: “We have gone to the local government, Honourables and dignitaries in the state yet no positive result. We lost three persons in Ikire and one in Iree. These people died in the course of discharging their duty. We are very dutiful even though we have not been paid a dime. Due to unpaid allowances, tricycle and okada riders have snatched our wives because of our inability to take care of them.”
Police Commissioner, Olawale Olokode, later joined them at the Ola-Iya Bridge and ordered them to stop the protest immediately.

He assured them that the  authorities will intervene in the matter to solve the matter.
He said, “You are embarrassing the Force with your protest;  you should have channelled your grievances to the appropriate quarters. You are disturbing public peace with this your protests. As far as you are wearing this uniform, we expect you to maintain high discipline as a force man”.