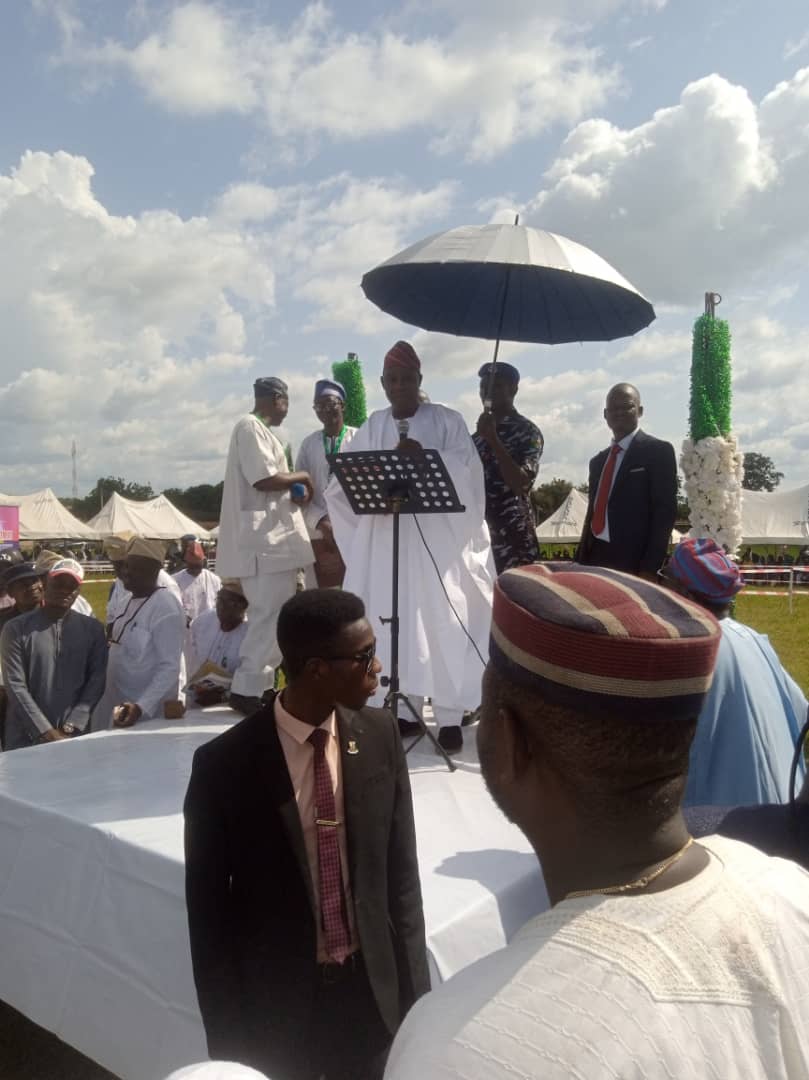 The two most prominent traditional leaders in Oyo North have officially exhorted everyone in Oke-Ogun to turn out en masse and vote en masse for the joint ticket of Seyi Makinde/Bayo Lawal in the upcoming 2023 general elections, giving Governor Seyi Makinde’s campaign for re-election a big boost on Saturday.

They stated this during the Civic Reception for Barrister Bayo Lawal organized by the Kishi Progressive Union KPU  at Youmbas, in celebration of his appointment as Deputy Governor of Oyo state.

Speaking at the program, the Òkere of Saki, Oba Khalid Olabisi Oyedepo, said that he and other monarchs from Oke-Ogun were present to recognize one of them who had recently been appointed as the deputy governor of Oyo state.

He stressed that Bayo Lawal should be referred to as Oke-Ogun since the term is used to describe someone who possesses the qualities of humility and honesty, both of which are present in Bayo Lawal.

With the enormous and enormously large development project that has been seated in Oke-Ogun, Okere noted that Bayo Lawal is a man who shows adequate recognition for the Obas. He also stated that the current administration is the government of Oke-Ogun.

Okere, who listed the construction of roads in Oke-Ogun and other ongoing projects in the Oke-Ogun zone among many other projects, hinted that when he and Olugbon traveled to Abuja for a health seminar, they were able to inform people there that Govebror Makinde’s administration had ensured the structure of health facilities across wards in Oyo state, urging the kishi community to support Makinde with a large number of votes.

“Although some would argue that royal fathers shouldn’t be partisan, we must be at this point since we have a strong desire to see our zone grow.”

He remarked that Governor Makinde is doing fantastically well and urged the Kishi community to vote for him by quoting a Bible scripture for that purpose.

Oba Francis Olushola Alao, the Olugbon of Orile-Igbon, Ogbomosho Zone, mentioned in his submission that Bayo Lawal is a humble man who he had the opportunity to get to know while he was the chairman of the housing corporation.

You can clearly see all of his marks of humility, which is the essence of leadership. Both the governor and deputy project a positive image, proclaiming them to be a benefit to the state of Oyo.

“Like Okere of Shaki suggested that Oke-Ogun should give Makinde back with votes, other places in the state have undergone remarkable progress,”

Olugbon argued that Makinde has actually done well, and he prayed for this government to be re-elected for a second term for the work it has done in terms of paying salaries, clearing debts, and developing infrastructure, among other things.

He urged everyone to turn out in large numbers and vote for Makinde despite the fact that there is no money in circulation in the nation and the government is still planning to take care of critical things in Oyo state.

He questioned why some people are fighting the government over their own narrow interests when he believed that everyone should be more concerned with the issues of the state.

“Please and please, cast as many votes as you can for Makinde/Bayo Lawal; this election is not about me, It is about Oyo state. It is about everyone,”— he added.

While speaking, the deputy governor, Bayo Lawal, who was in company of his beautiful wife, Mrs Ajibola Lawal, began by saying, “I don’t know where to begin with the outpouring of great remarks.” My friends who came out to celebrate with me this afternoon, as well as my community and the Kishi community as well as government functionaries, I must thank you all and pray that you depart peacefully.