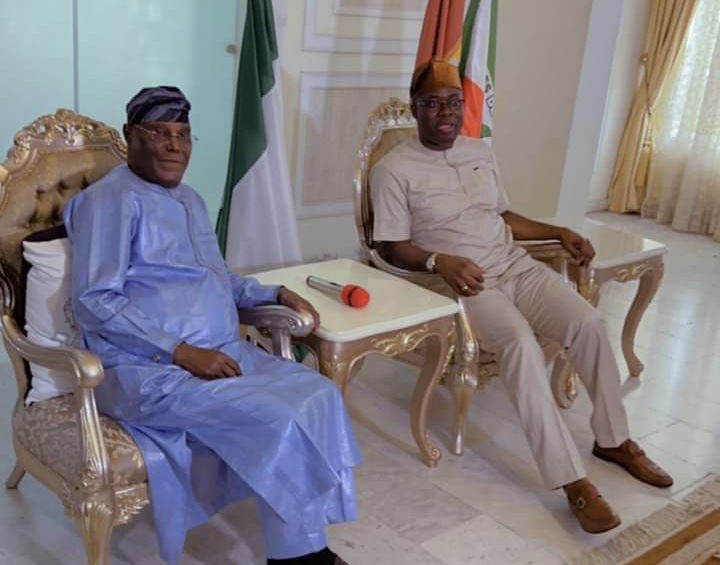 The Governor of Oyo State, Seyi Makinde says it is against the constitution of the Peoples Democratic Party (PDP) for the national chairman and presidential candidate to come from the same region.

Makinde spoke on Wednesday during the Interactive Session with the Southwest PDP stakeholders at Theophilus Ogunlesi Hall, opposite the University College Hospital, Ibadan.

MOUTHPIECE NGR reports that the opposition party has been in crisis since May when former Vice-President Atiku Abubakar became the PDP presidential candidate.

As he spoke, Governor Makinde asserted that he and others who support unity and reorganization within the party ranks had no issues with the party or its presidential candidate but that there were issues that needed to be discussed so that everyone could find solutions in order to make the party’s journey easier and get it to its desired destination.

Although it has happened and this is where we are, some people claim that it happens during conventions or something similar. In order for the party to win the upcoming election, various difficulties must be resolved.

Our integrity must be upheld. With the state that APC has placed our people in after eight years, they are in a desperate situation.

According to Yoruba, you must look at someone before hiring them to make a garment in order to determine whether they are actually capable of sewing a suitable outfit. Therefore, if we sincerely want to save Nigeria, we must resolve several concerns within our party.

“Our candidate is a unifier. Our candidate promotes harmony. We want to save Nigeria, and after speaking with him sometimes ago, I can confirm that he has a strategy in place to do so.”

“What we preach in our party must be put into action. First, we must unite PDP if we wish to unite Nigeria. The party must be representative of national unity if we are to have a government of that nature. In order to ensure inclusivity and the success of the party, we must act constitutionally.”

Makinde stressed that there are few things the presidential candidate can do for Southwest before election.

“Southwest PDP want a situation where your message to Nigeria can resonate when all these issues are reflected in the party.”

The southwest PDP is asking that the National Working Committee of the party should be restructured so that everyone would be united.

“We must resolve the issue by asking the national chairman to step down. “

While reacting, the presidential candidate of the party, Atiku Abubakar reiterated that PDP is the oldest political party in Nigeria, saying that over time, the party has developed its constitution, which calls for sharing of offices and power.

“What Governor Makinde is requesting is possible, either through procedure or the constitution. These problems require direction. According to any law, we are powerless.”

“He emphasized that although there would undoubtedly be differences of opinion among the party’s stakeholders and leaders, everything will proceed in accordance with the party’s rules and procedures.”

“I helped start the party, so I am well-versed in all aspects of it. Therefore, whatever is presented to us, I don’t want us to become distracted in advance of the upcoming election,” he added.