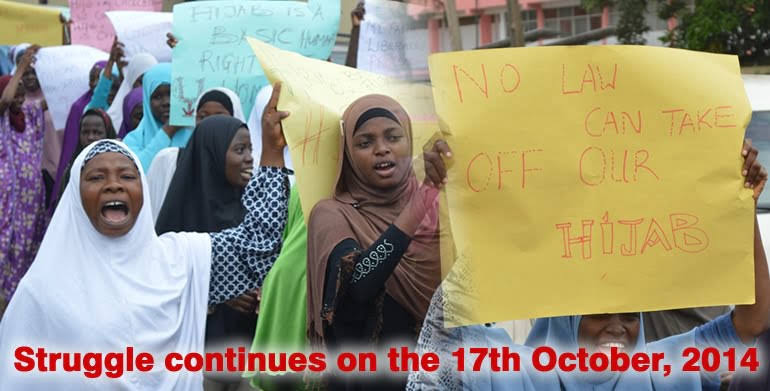 The Supreme Court has overruled Lagos State on its restriction of the use of head covering (hijab) by female Muslim students of public schools in the State.

In a split decision of five to two on Friday, a seven-member panel of the Supreme Court affirmed the July 21, 2016 judgment of the Court of Appeal, Lagos, which set aside the October 17, 2014 judgment by Justice Grace Onyeabo of the High Court of Lagos State, which upheld the hiab restriction.

Justice Kudirat Kekere-Ekun, who wrote the lead majority judgment, which was read on Friday by Justice Tijani Abubakar, dismissed the appeal filed by Lagos State against the 2016 judgment of the Court of Appeal, Lagos, on the grounds that the appeal was without merit.

Mouthpiece NGR recalls that the Lagos State Government had in February 2017 approached the Supreme Court to challenge the July 21, 2016 judgment of the Court of Appeal which reinstated the use of hijab by Muslim pupils in Lagos public primary and secondary schools.

This was after the state government sought to stay the execution of the judgment at the Lagos Division of the Court of Appeal but failed.

The case, CA/L/135/15, is between the Lagos State Government, Miss Asiyat AbdulKareem (through her father), Miss Moriam Oyeniyi and the Muslim Students’ Society of Nigeria.

A five-man special appellate court panel, presided by Justice A.B. Gumel, had on July 21, 2016, overruled the October 17, 2014 judgment of Justice Modupe Onyeabo of the Lagos State High Court in Ikeja, which banned the use of hijab in public primary and secondary schools in Lagos State.

While striking down Justice’s Onyeabo’s verdict, the Justice Gumel panel had held that the ban on hijab was discriminatory against Muslim pupils in the state.

The panel upheld the Muslim students’ contention that the ban violated their rights to freedom of thought, conscience, religion, dignity of human persons and freedom from discrimination guaranteed by the 1999 Constitution.

Justice Gumel also held that wearing the hijab was an Islamic injunction and an act of worship required of Muslims.

He said the use of hijab by Muslim pupils could not cause disunity, distraction and discrimination against students of other faiths as declared by the lower court judge.

At today’s judgement monitored by Mouthpiece NGR correspondent, the Supreme Court of Nigeria has granted the use of hijab by female Muslim students in Lagos State Government-owned schools.

The apex court delivered the ruling upholding the use of hijab by Muslim students on Friday in Abuja.

Our correspondent reported that wild jubilation greeted the verdict with the Amir (President) of the Muslim Students’ Society of Nigeria, Lagos State Area Unit, Miftahudeen Thanni, and other members of the organisation seen shouting “God is great”.

The court upheld that the ban violated the Muslim students’ rights to freedom of thought, conscience, religion, the dignity of human persons and freedom from discrimination guaranteed by the 1999 Constitution.