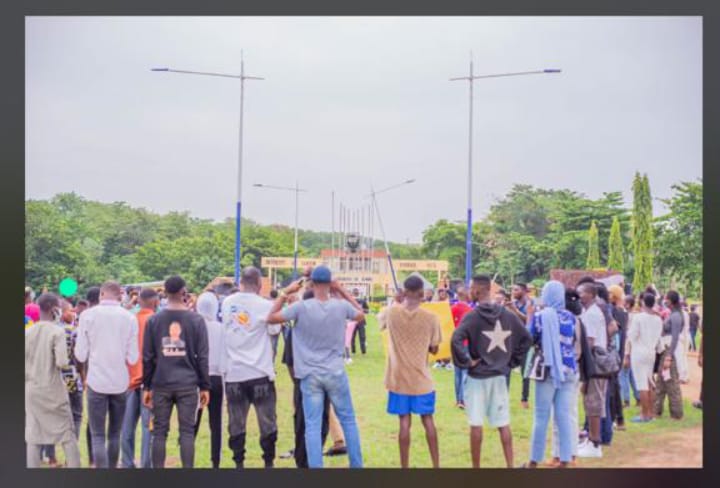 Students from University of Ilorin, Kwara State have protested the protracted strike action embarked by ASUU and other University unions, Mouthpiece NGR can report.

The protest which was led by the Students Union President, Taofik Waliu Opeyemi popularly known as Omoluabi witnessed massive participation of students across all departments.

In a live monitoring exercise by Mouthpiece NGR, Ilorin’s correspondent, Ahmad Adebowale, who is also a students at the University, reported that the protest commenced by 10:00am on Tuesday.

Students were seen with different placards to register their displeasure and dissatisfaction over the lingering crisis between Federal government and ASUU.

While speaking with our correspondent, the SU President, Omoluabi decried the necessity for both parties to reach a compromise in time as any unnecessary wastage of time would not be entertained.

“We are tired of staying at home. There are some students ought to have been graduated by now but unable to because of this lingering crisis.

Omoluabi said: “We are trusting the FG that by next week when they meet with ASUU, they’ll meet a common ground in the bid to end this strike.”

In a separate concerns by one of the protesters, Babatunde Qodri, a 400L student at the institution expressed great optimism that today’s protest would expedite their negotiation processes by the time ASUU and FG meet by next week.

“Even though the protest maybe seen from different perspectives, it’s still a right tool to press home our demands from the Federal government. We’ve got no other way of doing that.

“As disappointed as I am, I’m still expressing great optimism that FG would reach a compromise with ASUU by the time they meet next week. In a collective approach, I’m imploring all students bodies to work together at this times so as to be able achieve the aim for which the protest is based.”- He said.

Omoluabi promised to go back to the streets in leading students in series of protest should next week meeting with ASUU fails to be in fruition.